Human Ritual; Don’t Throw Out the Baby with the Bath Water

Modern societies are discarding past human rituals at an accelerating — perhaps a reckless — rate.  But there is much human wisdom embedded in past ritual.  We should be careful not to throw out essential wisdoms in our frantic attempts to remake ourselves as “rational moderns, unemcumbered by our pasts.”

The following was first published on Al Fin

The ritualistic inclination is built into our species, as you can learn from the profound but simple experiment described below.

Imagine you are a five-year-old being led into a small office. A woman with a warm smile shows you an assortment of strange objects. Some of them are shiny. You feel like playing with them. That’s OK, that’s allowed. Soon the friendly lady takes the objects away and says she wants to show you a video. On the screen is another woman. She has an identical set of objects lined up neatly in a row and she’s doing odd things with them — she lifts one and taps it on another, then puts it back and takes something else, twirling it in a peculiar fashion before replacing it. This goes on for some time. Then the strange objects are pushed back towards you and the lady says: ‘It’s your turn.’ What would you do?

If you were a five-year-old, you would imitate at least some of the actions you observed in the video. No instruction would be necessary. And yet, the behaviour doesn’t appear to achieve anything. The psychologist Cristine Legare and I have been working together for several years trying to understand why young test subjects bother to copy it. Our starting point is that they treat it as a convention of some kind. That is to say, they adopt what we call ‘the ritual stance’, imitating without questioning the purpose of the actions.

In our experiment, however, the behaviour of the woman in the video is ambiguous. Children can’t be sure it if is oriented to a goal or not. A surprisingly simple shift helps them to decide: we just alter the last move in the sequence. If the woman puts the last object into a box, it looks like the whole procedure was just a ‘funny’ way of putting an object away. We call this the ‘instrumental condition’. On the other hand, if the objects all end up back where they were originally placed, the whole action sequence appears not to have any tangible purpose. We call this the ‘ritual condition’. When the start and end states are identical, children are more confident that the demonstration on the video should be interpreted as a kind of ritual. And guess what? They copy it much more faithfully, and are less inclined to try out variations on their own initiative. _Harvey Whitehouse 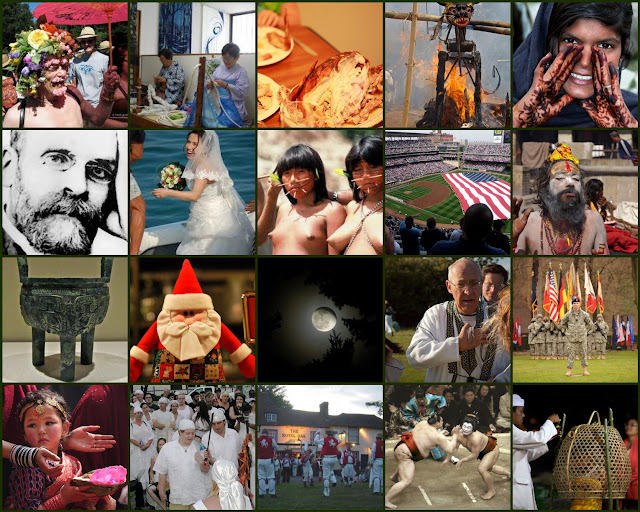 Ritual MosaicHumans value ritual from their earliest years. The need for human ritual only grows with the years. It seems to have always been that way.

Whether we consider the aborigines of Australia, the Native Americans, the ancient Hindus and Egyptians, or our own European ancestors, we find a world-wide preoccupation with ritual action that cuts across all races, religions, and cultures. We could even say that human culture is primarily a culture of ritual. _Culture of Ritual

Yet in our modern scientific world, the human need for ritual is typically denied and scoffed at, as an unnecessary residual of a more superstitious age.

But only a little thought and reflection should tell us that the further from religious belief and culture that we travel, the more necessary our grounding and passage of time rituals become.

Each culture, society, community, and family will have its own rituals based upon a unique history. Depending upon the ritual one is observing, one is either connecting with his family, community, society, culture, nation, or all mankind.

Rituals were once an unthinking part of daily life for every human living within a society or culture. In the modern scientific age, however, rituals must be consciously employed for their underlying purposes, or they become neglected and forgotten. The loss of grounding that occurs with the withering away of ritual is tragic — for all that it is rarely noticed.

In The Dangerous Child Method of Education and Child-Raising, ritual is given a prominent role — particularly in the toddler years, and in the years prior to puberty. Puberty itself is a passage, and deserves its own rite. And so on, through the years of passages that constitute human existence.

Daily rituals should also be utilised, from the earliest years. Here is a brief look at some “mindfulness rituals,” meant to ground and vitalise one’s daily existence.

1. Sit in the morning. When you wake up, in the quiet of the morning, perhaps as your coffee is brewing, get a small cushion and sit on the floor… I’ll … just sit, and focus on my breathing going in and out. I’m an absolute beginner when it comes to meditation, but this always starts my day right.
2. Brush your teeth… Try fully concentrating on the action of brushing, on each stroke of each tooth, going from one side of the mouth to the other. You end up doing a better job, and it helps you realize how much we do on autopilot.
3. Eat mindfully. Turn off the TV, put away the computer and mobile devices, even put away the book or newspaper… unless you do this, you are not truly appreciating your food. I like eating… mindfully, paying attention to each bite. It makes the food taste better, and I eat slowly and with gratefulness.
4. Wash your bowl. When you’re done eating, wash your dish immediately. Do it while paying full attention to your washing, to the water and suds.
5. Drink tea… Make your own tea ceremony — prepare the tea carefully and mindfully, pour it slowly, sip it with thoughtfulness. See if you can set aside one time each day to do this, and it will transform your day.
6. Walk slowly. I like to take breaks from work, and go outside for a little walk. Walk slowly, each step a practice in awareness. Pay attention to your breathing, to everything around you, to the sounds and light and texture of objects.
7. Read in silence… Have no television or computers on nearby, and just immerse yourself in the world of the novel. It might seem contradictory to let your mind move from the present into the time of the novel, but it’s a great practice in focus…
8. Look at someone gratefully. Each day, find someone you care about. Instead of just seeing what you always see, really look at the person. Try not to do it creepily. See this person for the miracle that she is, and be grateful for her existence. If you’re feeling generous, tell that person how thankful you are for her.
9. Work with focus. Start your workday by choosing one task that will make a big difference in your work, and clearing everything else away. Just do that one task, and don’t switch to other tasks. _Leo Baubata

These particular “rituals” are based upon the practise of “mindfulness,” which is usually associated with zen. But in Dangerous Child training, we incorporate mindfulness rituals without any particular trappings, other than those which might be particularly salient to the child.

There is something trance-like in the observation of many rituals. But rituals can just as easily liberate one from a default state — a “spinning of the wheels” trance which the brain can easily fall into. Mindfulness rituals in particular tend to help break us out of the many unthinking default trances into which our minds can easily sink.

If meaningful rituals are incorporated into our daily, weekly, monthly, and yearly lives, we are more likely to have a subtextual “soundtrack”, mapping system, or system of life indexing, which helps us to better understand where we have been and where we may be going.

As humans try to make sense of an increasingly secular existence, it is crucial for us to understand the importance of our underlying need for ritual — both on a daily basis, and to mark critical events and transitions in our lives.

To make the most sense of this need, we must go back and understand how rituals naturally came about, and how these native rituals were modified and adapted to meet the needs of different cultures, civilisations, religions, and societies.

This entry was posted in Dark Enlightenment, Philosophy, Ritual and Tradition. Bookmark the permalink.

1 Response to Human Ritual; Don’t Throw Out the Baby with the Bath Water