The Smart Fraction Theory as described by La Griffe du Lion and as elaborated by Michael Anissimov, suggests that a country’s economic prosperity is dependent upon the number of intelligent people who live there.

The rankings below of “The 25 Countries With the Most Brainpower” represents a slightly different way of estimating “smart fraction,” using PISA test scores in 15 year olds, and using the proportion of smart 15 year olds to estimate the total number of “smart people” in the country:

China was not included in the rankings, since the authors did not believe that the results provided by China were representative of Chinese high schoolers overall.

Notice that the US, by virtue of its larger overall population, was judged to have more “brilliant people” despite the much lower percentage of brilliance displayed by the test results.

In fact, the methodology of the above research by Duke University psychologist and researcher Jonathan Wai is likely to underestimate the number of “brilliant people” in the US due to one glaring detail: A significant proportion of the most brilliant people living in the US come to the country well after high school. In other words, the US literally steals the brilliant people from other countries from college age onward.

Another reason to suspect that the US has more “brilliant people” than was estimated above, is that the nation is rapidly changing demographically, with a smaller proportion of intelligent people within high school aged cohorts than previously — due to both immigration patterns and very low birth rates among the intelligent and educated.

Finally, the culture of “dumbed down education” has thoroughly taken over government education from K to 12 and beyond. When latent intelligence is suppressed by an ideologically top-heavy educational system that focuses on indoctrination rather than empowered learning, test scores are likely to suffer. 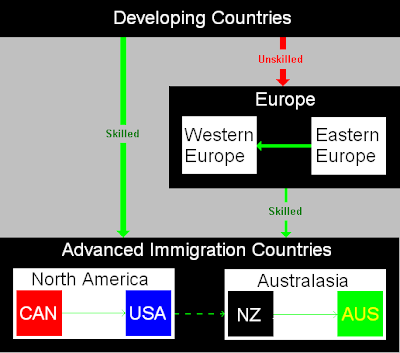 These two images provide a glimpse of immigration flow in general (above), and flow of physician immigrants (below) in particular. (from an earlier article on the original Al Fin blog) 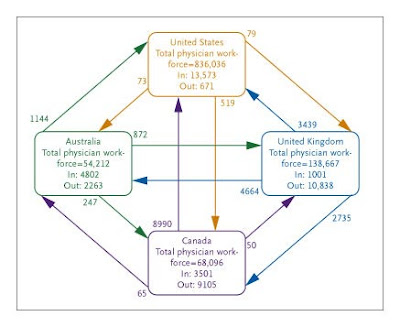 Which may be one of the reasons why the US tends to perform above its “IQ class” in national comparisons of GDP vs average IQ.

We have not heard the last word on the “smart fraction theory.” While we understand that pre-frontal lobe executive functions (EF) are more important to life success than IQ alone, we also understand that both IQ and EF are highly heritable, and positively correlated.

This topic is not politically correct, but it is crucially important to anyone who wants to pass on peaceful and prosperous living conditions to his progeny.

This entry was posted in Demographics, Economics, IQ. Bookmark the permalink.