No matter how hard feminist “scholars” try to explain away the gender gap in high level math and physics aptitude, the underlying reality will not go away.

In a new synthesis of past work, researchers found that women consistently score lower than men on common assessments of conceptual understanding of physics. However, when examining the factors that may account for these differences (such as student background and test-taking strategies), no clear pattern emerged. Thus, despite previous claims that the causes of this gender gap have been pinpointed, the problem remains unsolved and poorly understood. This has critical importance for science education reform.

Many changes have been made in college science instruction in the past decades. Numerous classrooms have shifted from a traditional lecture presentation to more interactive formats that aim to engage students in building their own knowledge _NewsWise 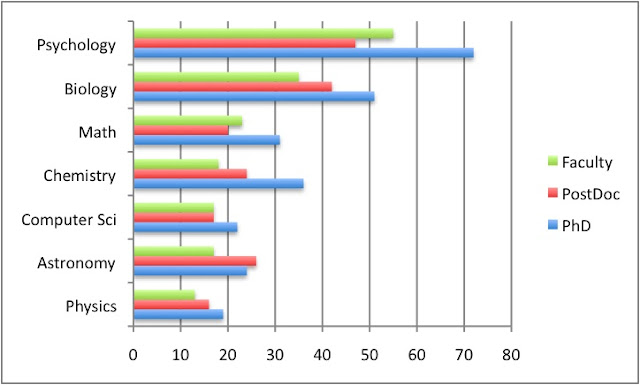 More from La Griffe on the continuing gender gap in mathematics.

No matter how many $billions are spent to change methods of science instruction, or to increase science outreach for girls, if the biological reality underlying gender differences persists, the real world achievement differences will also persist.

In US university science, women are well represented in psychology and biology, but they tend to come up short in the more math-dependent fields such as physics. Even when women go into engineering or computer science, they often choose to go into softer areas of the field such as “environmental engineering,” “computer graphics design,” fields requiring less math and more intuition.

From a previously published article at the original Al Fin blog:
So, why are males superior at math? Let’s be more specific, since the reality is a bit mixed:

In fact, recent research shows that males begin to take a qualitatively different approach to math thinking from an early age:

In a University of Missouri study, girls and boys started grade school with different approaches to solving arithmetic problems, with girls favoring a slow and accurate approach and boys a faster but more error prone approach. Girls’ approach gave them an early advantage, but by the end of sixth grade boys had surpassed the girls….

“Developing mathematical skill may be part ‘practice makes perfect’ and part ‘perfect makes practice,’” Bailey said. “Attempting more answers from memory gives risk-takers more practice, which may eventually lead to improvements in accuracy. It also is possible that children who are skilled at certain strategies are more likely to use them and therefore acquire more practice.” _MU News

The greater boldness exhibited by boys in math class is likely a testosterone effect, which is exhibited in so many other behavioural differences between males and females in childhood, adolescence, and early to middle adulthood.

The male superiority in spacial skills tasks and advanced math reasoning is likely to derive from far more subtle changes in the brain than those that lead to greater male boldness. But those more subtle changes are also largely due to testosterone effect.

These brain changes occur over time — slowly in childhood, and at a faster rate in adolescence. All levels of brain activity — from gene expression to physiological parameters to brain structure to cognitive function — are involved.

Feminist academics tend to compare male : female math skills in early childhood or very early in adolescence — before many of the testosterone-instigated brain changes have taken place in mid to late adolescence. At the same time, many feminist-inspired studies focus upon comparisons of basic arithmetic skills — thus failing to detect the male advantages in spatial skills and in advanced mathematical reasoning. It is like cherry-picking, except done in the study-design phase.

Fortunately, better tools for detecting brain activity and differences at all levels — from gene expression to fine brain structure to the neurological correlates of cognition — are being developed.

A fascinating new brain imager which combines MEG (magnetoencephalography) with MRI (magnetic resonance imaging) will allow an unprecedented degree of simultaneous spatial and temporal imaging of brain structure and activity.

Functional brain imaging has already developed to the point where it can be used as an objective, culture-free test for cognitive function and speed. It is only a matter of time before such crude objective measures of cognition can be fine-tuned to look at distinct types of cognition, including mathematical and spatial reasoning.

When it comes to brain, cognition, and behaviour, hormones have consequences. The sooner human academics can grow beyond their political correctness to look at these issues objectively and honestly, the sooner we can find ways for all of us to move ahead.