Self Selection in Wonderland

The image below demonstrates the range of test scores in verbal (V), spatial (S), and mathematical (M) categories for a range of higher education degree categories, from “Education” on the left to “Engineering” on the right of the graph. Score groupings are provided for graduates at the Bachelor’s, Master’s, and PhD levels for each category of study. 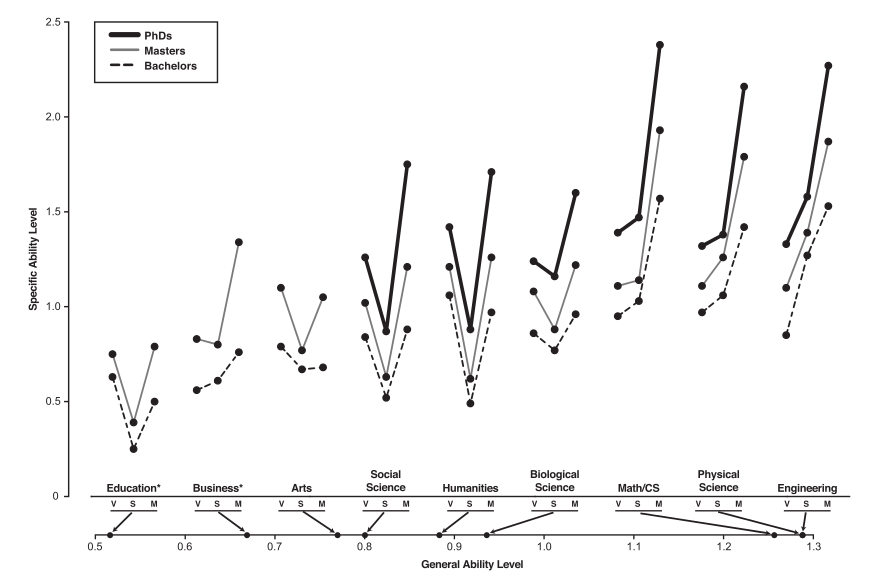 Figure 1. Average z scores of participants on verbal, spatial, and mathematical ability for terminal bachelor’s degrees, terminal master’s degrees, and doctoral degrees are plotted by field. The groups are plotted in rank order of their normative standing on g (verbal [V] + spatial [S] + mathematical [M]) along the x-axis, and the line with the arrows from each field pointing to it indicates on the continuous scale where they are in general mental ability in z-score units. _via Erwin Schmidt

The graph provides a lot of information packed together in one image. Students naturally self-select their degree according to a combination of inclination, aptitude, and perseverance.

Another informative chart from Peter Thiel demonstrates a troubling trend in the cost-benefit of higher education:

Knowledge may be priceless, but a higher education is clearly not. University administrators keep hiking tuition, the wages of graduates keep falling, and a whole generation of Americans is struggling under the crushing burden of debt as they postpone their dreams for a tomorrow that may never come. __WaPo

This picture is even more startling when you stratify the cost-benefit curve by degree, with education, social sciences, and humanities falling to the bottom — even at the higher degree levels.

Polite society is unwilling to admit something that is very obvious: College is not for everyone! When a well-meaning (?) society tries to force university on people who haven’t the aptitude, perseverance, or inclination to complete a difficult degree, it ends up with a cumulative college debt in excess of $1 trillion — and a spreading sense of failure, malaise, and hopeless indebtedness for those who fail — and for those who “succeed” in the wrong degree. More on the futility of descending into the hopeless hell that is the “Humanities.”

Dangerous Children have mastered at least three different ways of supporting themselves financially, by the time they are 18 years of age. They are multiply skilled, multiply competent across a wide range of activities, multiply lingual, and able to move out on their own — all by the age of 18.

The mass-production factory style of “education” that dominates many western countries was never a good idea for wide application across populations. It is a ruinously bad idea in heterogeneous multicultural societies.

If you have children, get rid of television and other wasteful distractions. If they are to prosper in the coming decades of debt and engineered decline, they will need to be widely competent, resilient, dangerous, and optimistic. Optimism in the midst of engineered decline is not an oxymoron, but it requires more depth than the average pop-culture saturated academic lobotomate can achieve.

Learning focus would be a good place to start.

This entry was posted in Education. Bookmark the permalink.

3 Responses to Self Selection in Wonderland