Beneath the Censored Complexity of Climate Chaos 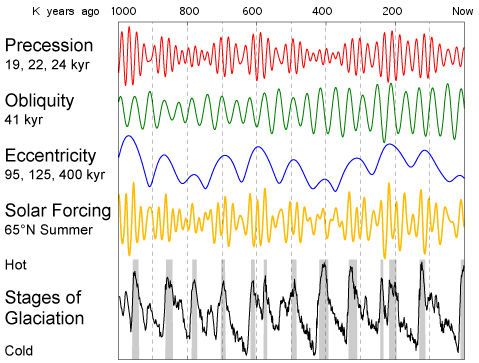 A cyclic chaos, with only a few pertinent natural cyclic components displayed

Earth’s climate is complex and chaotic. It is driven by the interaction of a variable sun with large oceans, land masses, atmospheric gases, and the activity of the biosphere — including human actions.

Moreover, Earth’s climate is driven by complex overlapping cycles on many levels. When natural resonant cycles overlap — at whatever level — they contribute to a chaotic pattern.

When the overlap starts, many higher-order resonances are also involved so fairly large areas of phase space have their tori destroyed and the ensuing chaos is “widespread” since trajectories are now free to wander between regions that previously were separated by nonresonant tori. _Wolfram

We begin with a pictorial overview of the natural components of climate — sun, ocean, land, atmosphere, volcanoes, ice & snow, living organisms — all of which appear to be subject to periodic cycling of various types, with potentially chaotic overlap.

Volcanoes can exert very strong influences on climate. It appears as if volcanic activity can occur at widely separated locations almost simultaneously, due to underlying geologic activity. Whether or not such tectonic movements occur “cyclically,” the impact of such large scale volcanic activity can easily contribute to a naturally chaotic climate.

Natural ocean oscillations are thought to be driven by periodic solar variation, pictured below. These ocean oscillations such as El Nino (PDF) drive cycles of atmospheric heating and cooling, cycles of ice & snow, and strongly influence populations of living organisms worldwide.

Solar variation influences the size of the heliosphere, and determine the extent of galactic cosmic ray infiltration into the solar system and Earth’s climatic system. This cyclic variation of cosmic ray bombardment on Earth’s atsmosphere is thought to influence the amount of cloud formation in the atmosphere, which influences planetary ensolation and radiative heat balance.

The Milankovich orbital cycles occur with different periodicity in the tens of thousands of years, creating overlapping resonances with potential chaotic results on climate.

Another multi-thousand year orbital cycle which could easily influence global climate, is the slightly varying angle of Earth’s solar orbit to the ecliptic. As the planet falls slightly below the plane and risis slightly above the plane of the ecliptic — over tens of thousands of years — the thickness of intervening dust between Earth and Sun varies. This periodically alters the ensolation of the Earth’s system. Such cycles may have subtle effects, but in combination with other overlapping resonances, these overlapping effects may push the system into a chaotic result.

The image above illustrates the heliosphere, which can expand and contract according to the Sun’s periodic activity. The fluctuating heliosphere is an important line of defense against galactic cosmic rays — which are very likely to influence Earth’s climate.

The Solar system is passing through an enormous interstellar cloud, which may or may not have an influence on climate. But it is a rather fascinating topic all the same.

Understanding natural chaos in climate is a crucial matter for policy-makers, who must determine the fate of US$trillions of future spending of tax dollars.

For science to provide the greatest benefit to those who fund it, it must focus upon genuine problems which need to be solved. As long as scientists have open, sceptical minds, they are more able to look at problems from varying perspectives — from the close-in small picture, to the far-out big picture.

Modern humans are being fed a diminished view of climate which fits the corrupt and narrow activist views of persons in power within political, academic, media, and activist circles. Sheep are meant to go where they are led.

But following that path of political correctness would create tragic consequences. We have the choice whether to behave like sheep or like competent, independent-minded humans.

This article was adapted from an earlier article first published in the original Al Fin blog.