Compression-evaporation-condensation cycle on top — An electromagnetic cooling cycle beneath —

Modern air conditioners and refrigerators have too many moving parts, are expensive to buy and run, and require too many expensive repairs. Researchers are hard at work, devising simpler, hardier, less expensive replacement systems for cooling and refrigerating which amount to nothing less than a revolution.

The breakthrough system, which is projected to be 20 percent more efficient than current refrigeration technology, could be inside your fridge by the end of the decade.

The system is using a water-based fluid flowing through a series of magnets to transfer heat, rather than a chemical refrigerant and a compressor. This significantly lowers any harm to the environment and makes the recycling of old refrigerators simpler.

“This is a big deal,” says Venkat Venkatakrishnan, a leader of the research team. “We are on the cusp of the next refrigeration revolution.” _GE

Thermoelectric refrigerator based on the Peltier effect

The cooling cycle shown below is based upon the compression and decompression of a special solid material, a Nickel Manganese Indium, or Ni-Mn-In alloy developed by a team of Spanish researchers. 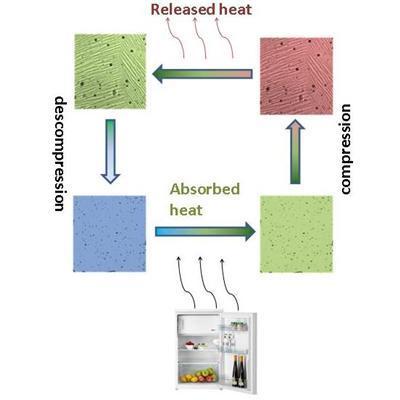 GE researchers in Germany and the US are taking a slightly different approach, using the same type of nickel-manganese alloy magnetic materials.

… the team’s materials scientists developed a new type of nickel-manganese alloys for magnets that could function at room temperatures. Design engineers arranged the magnets in a series of 50 cooling stages. Today they are capable of reducing temperature by 80 degrees. “We are focusing on magnetic refrigeration as a potential replacement for all the refrigeration technologies currently in use,” Benedict says. _GE

Advantages of the new system:

What makes this revolution so cool is that it is taking place below the pop-culture radar screen. It is too mundane for the gee-whiz! media, but the effects of the conversion to such systems of cooling and refrigeration will be profound.

This entry was posted in Energy, Technology. Bookmark the permalink.