Obama’s EPA Holds a Gun to US Economy’s Head

The problem with lefty-green climate and energy policies is that they are based upon delusional ideas about climate science, and pie-in-the-sky ideas about big wind and big solar energy. Those delusions in combination are fatal to an economy.

The US Environmental Protection Agency under US President Obama is threatening to make energy paupers out of the majority of US citizens — based upon a false scientific hypothesis.

Energy is uniquely essential to modern life and human progress; it is the master resource. …the human mind, has harnessed energy to meet the world’s increasing needs. Throughout history, human knowledge, creativity, and sweat have overcome technical, resource, and environmental challenges to convert energy into useful work. __ Energy the Master Resource (online e-book)

Affordable and abundant energy is crucial for a prosperous modern economy. But if an ideologically top-heavy government agency goes to war against its nation’s energy supplies, that nation’s economy — and ultimately its very existence — are in big trouble.

The US Supreme Court is currently divided on the EPA’s aggressive anti-CO2 regulations. The EPA’s crusade against coal and other fossil fuels is based upon the (CO2) catastrophic anthropogenic global warming hypothesis, which is supported mainly by computer models.

How do the projections of these models compare with real world observations? 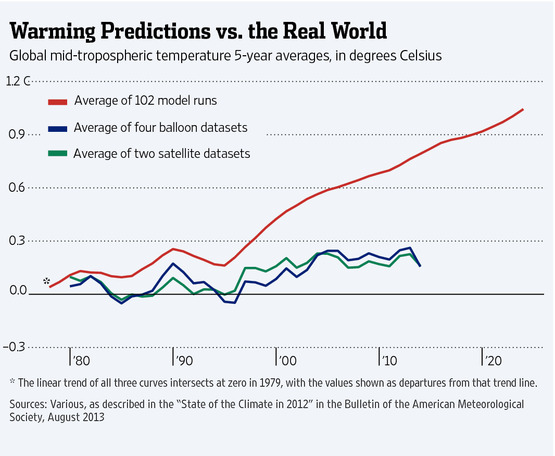 The graph shows the pattern. The red line represents the average of 102 runs of models created over the last two decades. The blue and green lines show the actual pattern of temperatures in the earth’s atmosphere as measured by four balloon datasets (blue) and two satellite datasets (green).

“We might forgive these modelers if their forecasts had not been so consistently and spectacularly wrong,” the two concluded. “From the beginning of climate modeling in the 1980s, these forecasts have, on average, always overstated the degree to which the Earth is warming compared with what we see in the real climate.” _RealClearEnergy 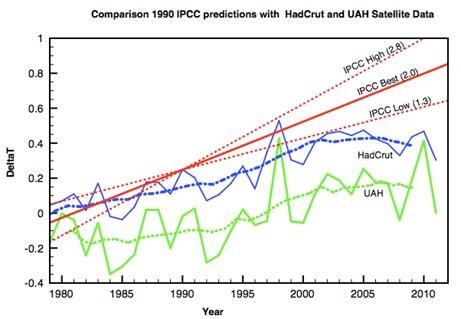 Every single IPCC forecast from the 1990 Report on was wrong. Instead of re-examining their science they began what became their standard practice of moving the goalposts. The full politicizing of climate science took hold between the 1990 and 1995 Reports. Instead of acknowledging the science was wrong they changed from forecasts to projections and all those were incorrect since. Figure 6 shows Clive Best’s three IPCC levels of projection from 1990 against actual surface (blue) and satellite (green) temperature. _WUWT

This is not an academic question. It is a question of how far US government agencies will be allowed to go in applying poorly thought out science. Will the EPA be allowed to raise the cost of energy in the US to crippling levels based on unproven “science”? That is the question.

If the US economy collapses, it will put a lot of other economies and governments at risk. Global unrest, and multiple wars of convenience, would be virtually inevitable. Simultaneous EMP attacks against North America and Europe would put an immediate end to the multi-century dominance of European civilisation, and the spotty trans-millennial dominance of western civilisation.

A shame, too, given how close we are to some truly disruptive technological developments in the fields of biotechnology, nanotechnology, automation, virtual reality, and neuroscience. Oh well. Easy come, easy go. Surely Obama and his EPA know exactly what they are doing, eh?

More on what EPA-style policies are doing to Europe:

Meanwhile, the shale revolution is just beginning, as long as the EPA keeps its hands off US energy.

Europe also has plenty of shale energy, if its lefty-green corrupt crony politicians could be swept from power

The problem with lefty-green energy and climate policies is that they are based upon delusional ideas about climate science, and pie-in-the-sky ideas about big wind and big solar energy. Those delusions in combination are fatal to an economy. 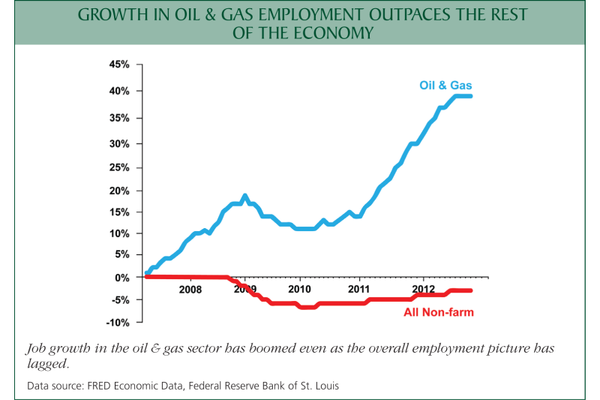 If Obama’s EPA kills oil & gas, there will be nothing left

More: In every US state where shale fracking has taken hold, employment is up well above the national average. Obama is lucky that his EPA did not kill the shale revolution in its cradle. Fortunately, neither Obama nor his lackeys understood what was happening until it was too late. Killing the golden goose at this stage would be very tricky politically.

If Obama does choose to kill US shale oil & gas — the only high point of the US economy under his tenure — he will do it in 2016, safely after the next presidential election — particularly if the next US president is to be a republican. Just to be safe, Obama’s EPA has pushed back the date of publication for its big “fracking” study to the year 2016, in politically convenient fashion.

If a Republican does get elected president in 2016, Obama will not hesitate to pull the trigger on the few parts of the economy that happen to be doing well. His various agencies are likely to do everything possible to slow economic activity while they can to make his successor in the Oval Office look bad. Such “poison pill” attacks at the end of a lame duck presidency can have significant effects on the economy for years and decades subsequently.

President Clinton did much to lay the groundwork for the big financial catastrophe of 2007-2009 in the final weeks of his presidency. Obama is likely to do far worse, if a Republican is elected.