Brave New World: Running Out of Other People’s Money 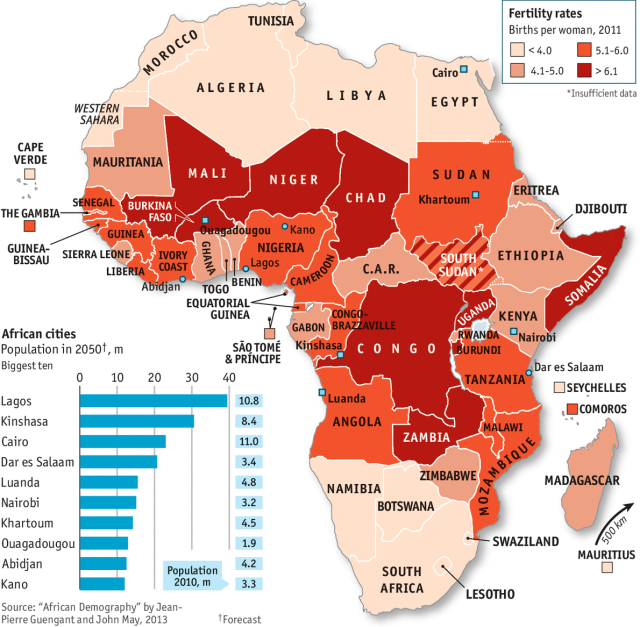 Africa Popping: 2.7 billion pop. by 2050; More than twice as many under age 14 as currently exist

Image via Brian Wang at Nextbigfuture

Looking at a world map of Total Fertility Rate by nation: 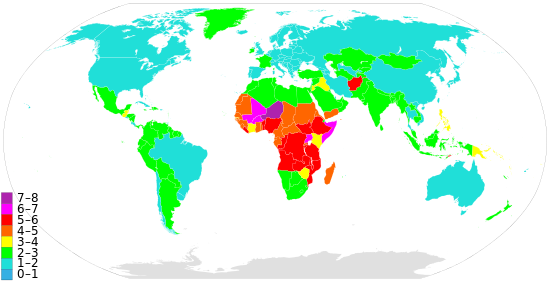 We see that most of the world’s population growth over the next 40 or 50 years will take place in some of the world’s least productive nations — most dependent upon foreign aid.

Surviving on Other People’s Money

The productive populations of developed nations — providers of foreign aide — are shrinking at the same time that populations of recipient nations are growing.

What would happen to the world if the abundant fountain of foreign aide went dry?

Look at medical aide: The primitive nations do not make most of their own vaccines, antibiotics, surgical instruments and supplies, nor do they supply most of their best physicians, surgeons, or public health workers.

Look at food: SubSaharan Africa is a fertile land, capable of supplying all its food needs, with an abundant excess for export. But when you see photographs appealing for hunger aide, the photos are almost invariably of black Africans. Look what happened when Rhodesia became Zimbabwe, and a wealthy food-exporting nation became an impoverished nation of undernourished people.

And on and on…. Africa cannot support the population it has already without abundant aide and assistance from the outside. How long can the developed world fund and support a population explosion of people who are among the least intelligent, least productive, and most violent people in the world?

Robert D. Kaplan’s prescient 1994 article, The Coming Anarchy, and the subsequent book, were premised on the assumption that foreign aide would continue. To understand the bleak picture without foreign aide, imagine the anarchic devastation as portrayed by Kaplan, but multiplied by 100 and spread over 10 times the geographical area.

IQ and EF (executive function) together predict life success. Both IQ and EF are roughly 80% heritable.

No matter where a person goes, there he is. A small proportion of persons transplanted from the high TFR undeveloped world to the low TFR developed world, will succeed in becoming self-sufficient, positive additions to their new country. These are persons with relatively high IQ and EF (executive function), compared to their fellow immigrant countrymen. Most of the rest, unfortunately, are apt to end up on welfare rolls or in the criminal justice system, or both.

In the past when SubSaharan blacks transplanted to more developed countries, their progeny has accounted for a much higher level of crime than the progeny of other population groups. 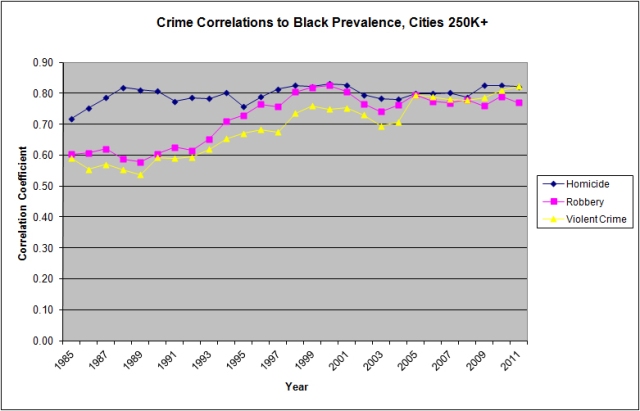 Homicide, Robbery, and Violent Crime correlations to black prevalence in US cities above 250K population
http://www.unz.com/article/race-and-crime-in-america/

Once we accept the reality of these stark racial facts, we must naturally wonder about the causes, and also why the historical trends seem to have been moving in exactly the wrong direction over most of the last quarter-century. _ http://www.unz.com/article/race-and-crime-in-america/

Statistically, it would seem that the higher the population prevalence of blacks, the more crime. This is as true in Europe as it is in the Americas.

One of the ironies of the brave new multicultural world, is that the victim population groups must pay ransom to the violent population groups to keep levels of violence to levels that can be largely ignored by government, media, and academia.

One thing that didn`t help the cause of the people who burned and looted was that two days into the rioting, TV newscasts carried pictures of long lines of people at a Los Angeles post office, waiting for their welfare checks. You couldn`t ask for a more graphic illustration of what bothers the middle-class taxpayers. The city is burning, demands are being made, and meanwhile each person in line at the post office represents tax money that is going out of a working person`s pocket. Several of the people in line told interviewers that they were inconvenienced by the failure of federal workers- mail carriers-to hand-deliver their checks. _Chicago Tribune

When seen in this way, both foreign aide and domestic welfare to transplanted third world populations can be seen as a type of extortion payoff. “Keep paying us and we will not beat and kill all of you at one time.” Or something like that.

To monitor how effectively these payoffs against violence are preventing third world in the first world violence, check these websites often:

Within the nations of the developed world, the higher the proportion of third world people possessing generally low IQ, low conscientiousness, poor executive functions, high violent tendencies, and low impulse control grows — the lower the quality of life will become for those who must pay the bills and try to go on about their lives as best they can.

If you think you know what a holocaust is, wait until you see the brave new world when it runs out of other people’s money.

HFTB-PFTW; Be aware wherever you go, of both dangers and opportunities.

Some parts of the world will pass through The Coming Anarchy relatively unscathed. Those would be places that successfully restrict the numbers of low IQ/ poor EF/ high TFR third world immigrants, as well as those places where people and their progeny are wise, resilient, competent, and dangerous.

Other problems with foreign aide — massive corruption in recipient states.

Money-grubbing for international aide at the climate talks — situations where China and India want to be treated like “developing nations.”

This entry was posted in Africa, Blacks and crime, Demographics, Dysgenics, Maintenance and tagged Demographic Decline, dysgenics. Bookmark the permalink.

4 Responses to Brave New World: Running Out of Other People’s Money