… Among the top 20 global economies, only India, with a population almost nine times bigger than Russia’s 143 million, has more people living with HIV, according to the Joint United Nations Programme on HIV/AIDS, known as UNAIDS, and the U.S. Centers for Disease Control and Prevention.

“There is a climate of suspicion about everything that comes from the West — and the U.S. particularly,” Kazatchkine says. “I don’t see much progress coming in Russia unless it changes quite radically. It’s so shocking. The nation’s HIV policies result in death and suffering that could be avoided.” _HIV Surges in Russia

The picture is similarly bleak in regard to TB, suicide, violent crime, drug and alcohol abuse, diseases of excessive tobacco use, and a widespread hopelessness that drives Russia’s best young men and women to emigrate westward.

At 994 per 100 000, Russia has one of the highest death rates from cardiovascular disease in the world, accounting for 52% of all deaths nationally each year. Similarly, the rate of traffic injuries, at 20.6 per 100 000, is double that in EU and G8 countries, and the rates for cancer mortality, homicide, and suicide far exceed EU levels. __ Russian Health 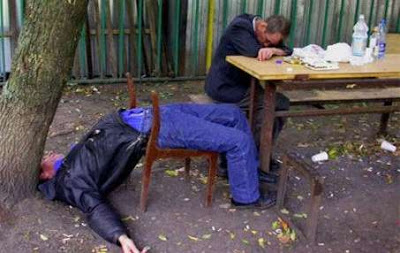 Men of Russia Behind the Potemkin Facade

Russians want to be seen as a strong nation, even when they are falling down drunk. Putin’s empty swagger makes them feel good, in a drunken stupor sort of way.

… even Russia’s phenomenal natural wealth can’t support indefinitely an economic system that produces little and instead efficiently breeds parasites. Even with high oil prices and output, the Russian economy is sputtering. Capital and brains are fleeing the country, investment is shrinking, and inflation is on the rise. The Central Bank has already been forced to devalue the currency to make petrodollars go farther in ruble terms. _ Alexei Bayer

Here is a short list of a few of Russia’s many severe problems:

The ethnic Russian depopulation of siberia
The persistent brain drain of Russia’s best young graduates
The persistent womb drain of Russia’s fertile young women
The persistent capital flight from the corrupt inner circle to overseas banks
The persistent movement of families of the elite overseas
The hopeless dependency of a shrinking Russia on the volatility of energy prices
The ubiquitous sense of hopelessness among Russians
The public health disaster of suicide, drunkenness, drugs, TB, HIV, violent crime
The steady replacement of ethnic Russians by uneducated muslim immigrants
The impossible business environment inside Russia killing the private economy
The disappearance of any meaningful speech and other freedoms under Putin
The steady decay of Russia’s military and military industrial infrastructure
A steady movement of Chinese interests into resource-rich Siberia, at the same time that ethnic Russians are leaving.

“There’s a risk that in the most negative situation, Russia will stop existing as a state,” said Olga Isupova, a senior demographic researcher at the Higher School of Economics, a leading private Russian university in Moscow.

…Russia as a whole lost 12.3 million people from 1992 to 2008. An influx of immigrants, mainly from former Soviet territories, helped hide the extent of the problem. The population is now 142 million, but it would have been 136.3 million without that surge from outside.

…— the decay in the heartland suggests that Russia isn’t a resurgent superpower so much as a nation that’s trying not to come apart at the seams._NewsTribune_via abu al-fin

If Weaker, Why Did Putin Invade?

Putin… saw a pattern of words without consequences, of actions that are ephemeral and not sustained, and so he concluded that a weaker power like Russia most certainly can bully a neighbor with access to stronger powers like the United States. For Putin and his ilk, willpower and his mythologies about Russian moral superiority are worth more than the hardware and data points of the West. __Potemkin Putin Invades

The neo-fascist billionaire leader Putin has many fans in the western world who assume that he is attempting to do what is best for the Russian people. In fact, Putin is doing just the opposite. Which is why the smart people are either moving out of Russia now, or moving their money out now in preparation for getting out permanently in the future.

More: Russia is not the only country that is bleeding its best people away

More: Putin changes his mind about fracking for Russia. For the rest of the world, he’s still against it. He’s not afraid to fund western green agitprop, either.