Would Russia still be Russia Without Siberia?

Siberia’s population is disappearing. In a generation, if current trends continue, the vast land—one and a half times the size of China—will have fewer inhabitants than Moscow or St. Petersburg. _Shrinking Siberia More

Massive oil and gas profits allow the leadership to finance pet projects, many of which benefit those in Putin’s inner circle but contribute little to the general welfare. They suck up money needed for modern highways, regional airports, hospitals, courthouses and other infrastructure, analysts say.

State-owned factories still dominate production. Bureaucracy stunts the small businesses that are the engine of growth elsewhere. Private wealth generated in Russia is often spirited abroad, to countries where banking and investment are more trustworthy. Efforts initiated by former President Dmitry Medvedev to streamline the economy have sputtered since Putin engineered his return to the top job two years ago and shifted the focus to enhancing state control and ensuring public order.

As economic growth has flat-lined over the last six months, a sense of unease has emerged, even among state economic advisors who see more risk to stability from an economic crisis than a political one. Putin’s seizure of the Crimean peninsula from Ukraine, causing a sharp deterioration in relations with the West, is likely to make matters worse.
__LAT 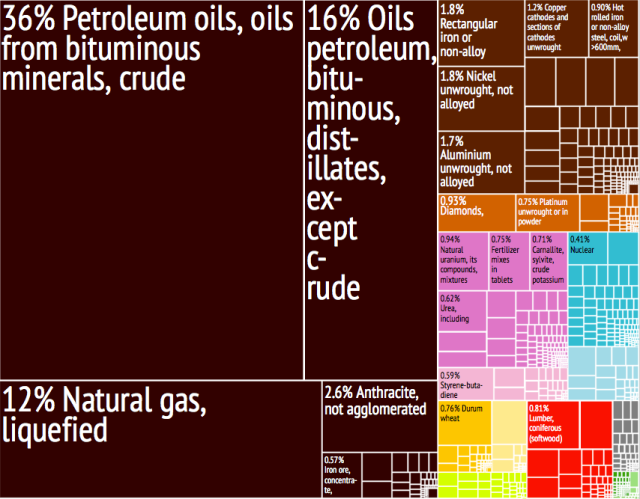 Russia’s Unbalanced Economy — What Will Happen After Siberia is Lost?

Budgetary break-even costs for Russian oil sales were estimated to be about $120 bbl in 2012. But that was before Putin’s ambitious new spending plans, and grand expensive gestures meant to demonstrate Russian power. And there is no reason to believe that Putin is satisfied with his expensive annexation efforts to date. The grand new Russian empire is still being built.

What happens if Russia adds territory to the west, only to lose much more territory in the east? Siberia is a huge, hostile territory, both unattractive and relatively inaccessible to most ethnic Russians.

Sparse population east of the Ural Mountains discourages investment in roads or cost-effective air connections, often forcing those who want to travel between Siberian cities to fly via Moscow. To fly from Yakutsk, in the depths of Siberia, to Ulan Ude near Lake Baikal, a distance equivalent to that between New York and Miami, takes a minimum of 23 hours and a route through Moscow. _LAT

We must continue to remember that the Russian government depends upon sales of natural resources to finance its budget — and to dominate Europe and other regions. Most of its natural resources are located far away from ethnic Russian populations. The situation is growing worse, as ethnic Russians continue to flee Siberia. Who will be left behind to watch over this source of great wealth?

China has old territorial claims to parts of Siberia. As Russian populations and concerns shift westward, China is making plans for Siberian wealth. Some of the demographic shift is taking place beneath the surface:

One feature of the Russian-Chinese relationship seemed especially telling: Cross-border marriages are overwhelmingly between Chinese men and Russian women. Much of this has to do with demographics-Russia has a surplus of women, while China has too many men. But as one Russian woman told me, “Chinese men are kinder and more attentive to their wives. And they usually have more money.” __China is the Destiny of Siberia

An eager current of Chinese immigration and investment is flowing northward into formerly Russian Siberia.

The Chinese have effectively avoided paying taxes and managed to take control of several companies that have become de facto monopolies in the food supply. In the Russian city of Blagoveshchensk on the Amur River, a 1755-mile-long waterway separating Russia and China, the factory producing Kvass, a popular Russian beverage made out of rye bread, is now owned by Li Lihua, a Chinese businesswoman. He Wenan, a Chinese entrepreneur, has specialized in the construction of shopping centers, along with running the most expensive hotels in town. In Chita, Chinese investors have bought a former tank factory and converted it into a truck manufacturing plant.

All indications show that the Russian Far East is fast becoming (if it has not already become) economically dependent on China. Its future is in the hands of the local Chinese, not Russian local authorities. The Chinese cultivate the land, which the Russians are not motivated to do on their own. Local authorities and businessmen don’t complain about dwindling Russian manpower beyond the Amur River as they can easily replace native workers with Chinese who are willing to work 12 hours a day or more. __EurasiaReview

Meanwhile, as the slow motion annexation of Siberia by China takes place, Putin’s attentions continue to be focused on re-building the Eastern European portion of the Tsarist empire. Has Putin forgotten the source of his ambitious spending, and the basis for his ability to cow Europe? With Putin, one never knows.

But the biological imperative is driving China’s stealthy expansion, even as a widespread malaise is intensifying inside the portions of Russia that are still controlled by the Russian government. Russia’s best and most fertile people are leaving. They are being replaced in Moscow and elsewhere largely by muslim newcomers with no loyalty to Russia, and with significantly higher birth rates and lower death rates than ethnic Russians.

Slow motion history-through-demographics is not as startling as wars, invasions, or genocides, but the end result over vast expanses of time may appear the same.

The hubris of Tsar Vlad carries a price tag

Do you get your information on Russia from Mark Adomanis? Mark comes across in that interview as a typical member of the modern skankstream journo-listic echo choir. Scared to death of Putin, and clearly lacking the courage of persons — both still living and murdered — who have dared to speak the truth to dictatorship.

Russian Recession in the Pipeline

Life in Crimea under Russia a clusterfoque

Although Russia is focusing mainly on the western frontier of its empire, it is making a bloody hash of it. Meanwhile, the east of Russia is slipping away, and that is where most of Russia long-term wealth resides.

Russia’s “captive trading partners” in Europe will eventually find other sources for the things they need. As that happens, Russia will be a loser on both the western and the eastern fronts.

China will play a waiting game with Russia, hoping the country will eventually implode from a lethal combination of ethnic strife, government corruption, Islamic rebellion, fiscal mismanagement, and a commodities driven economy that lacks diversity. When a total collapse does occur and chaos ensues, China will move in a deliberate and swift fashion across its 4,000 km boarder with Russia to secure what it can of the Russian Far East and Siberia. _ China’s Manifest Destiny

7 Responses to Would Russia still be Russia Without Siberia?