Update — Other than energy exports, Russia’s economy is disintegrating:

The Russian central bank last month said $63.7 billion left Russia in the first quarter, equal to all capital lost in 2013. The World Bank estimates this year’s total could reach $150 billion. U.S. automakers GM and Ford, which were doing well in Russia’s underserved auto market, decided this year to slow down or stop some production lines “because of political risk,” Cohen said. Companies leave because of corruption, but the worsening economy is another factor. “The economy is projected to slow down or go into recession. “Consumer income is dropping; consumer credit is dropping. So people will be buying less, including American cars,” he said.

… Russian officials may be thinking they can operate without being part of the global economy, but “it feels like going back, after 30 years, to where we were in the Soviet Union,” she said. “People always hope for the best. I don’t hope for the best anymore. It’s not like tomorrow the curtain will fall, but the sooner we leave the better.“ _Tech Startups Abandon Moscow (h/t NBF>

After several years of condemning shale oil & gas production as destructive to the environment, uneconomical, and of insufficient quantity to be meaningful, Putin and the oligarchs have reversed policy.

Russia… can deploy modern 3-D seismic imaging and computer technology, but it lacks the service industry and the fast-moving wildcat culture that lies behind America’s success, as well as a tax system fit for purpose.

“In Russia a horizontal well-bore of 1.5km costs $15m to $20m. In the US the costs have gone down from $8m to $3.5m for the same length of well. It’s simply not possible to transplant technologies from the US and transport them to East Siberia or the Volga. There are no standard solutions. I hope it won’t take twenty years to fulfil the shale revolution in Russia,” he said. __Evans-Pritchard

Russia’s government depends upon oil & gas revenues to run Putin’s ambitious schemes of expansion and global intimidation. But cheap new supplies of shale gas and petroleum products from North American shale production technology threaten to push & hold global prices for oil and gas below Russia’s fiscal breakeven price. Rather than to allow his plans for Russian expansion to be foiled, Putin is forced to reverse his public stance on shale production, and request assistance from western oil companies to provide expertise which Russian companies do not have.

Eric Liron, Rosneft’s vice-president, said Russia has a long learning curve head. “We have some of the best scientists in the world but we’ve been lazy. We didn’t conquer unconventional oil and gas because we didn’t need to,” he said. __Evans Pritchard

BP is in a difficult situation. It is helping Russia develop its resources, using western technology and expertise which is scarce inside Russia. But if history is any guide, Russia will nationalise BP’s assets as soon as the new fields become productive, and as soon as the few remaining competent and sober Russian engineers and scientists understand how to use and maintain the technology. 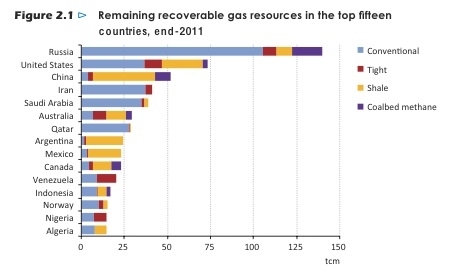 Russia’s resources of oil & gas remain vast, despite the fact that poorly maintained Soviet era technology is failing, and production in many fields is falling. The need for outside expertise to raise production to support Kremlin spending is growing critical.

Update: China’s shale gas reserves are massive, and being steadily explored and developed

Where China currently gets its gas, indicating that the deal with Russia was all about securing multiple supplies to play against each other. With China, a deal is never fixed and final.

When the $70 million pipeline construction is complete, Russia will be supplying China with about 1/5th of its current consumption, meaning that nearby Turkmenistan will remain the leading source. http://www.realclearenergy.org/charticles/2014/05/27/where_china_now_gets_its_gas_107793.html

Meanwhile, Europe chooses to be helpless and vulnerable.

Earth’s global energy assets are massive, with human ingenuity being the limiting factor for harvesting them.