It is only when we start looking at comparisons of brain size and IQ within the human species, that we begin to stir up controversy. All the same, if we are to understand the things that make us who and what we are, we will have to brave a bit of controversy. 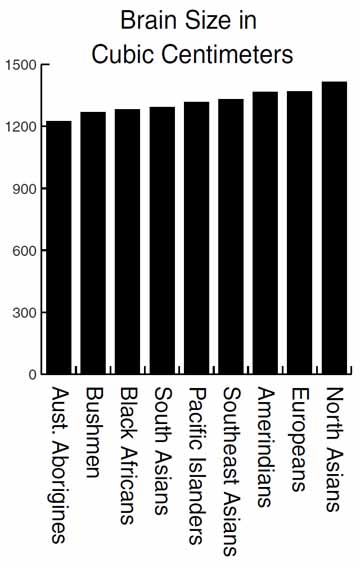 A recent study from the Netherlands (PDF) expands our knowledge of relationships between brain size, heritability, and IQ:

Human brain volumes change throughout life, are highly heritable, and have been associated with general13 cognitive functioning. Cross-sectionally, this association between volume and cognition can largely be attributed14 to the same genes influencing both traits. We address the question whether longitudinal changes in brain volume15 or in surface area in young adults are under genetic control and whether these changes are also related to general16 cognitive functioning. We measured change in brain volume and surface area over a 5-yearinterval in 176 mono-17 zygotic and di zygotic twins and their non-twin siblings aged 19 to 56, using magnetic resonance imaging. Results18 show that changes in volumes of total brain …, lateral ventricles … and in surface area are heritable …. An association21 between IQ (availablefor91participants) and brain volume change was observed, which was attributed to genes22 involved in both the variation in change in brain volume and in intelligence. Thus, dynamic changes in brain23 structure are heritable and may have cognitive significance in adulthood. _Abstract from paper (PDF)

More on brain size and IQ

More detailed brain imaging shows that the sizes of particular brain centres as well as the organisation and speed of white matter networks correlate with IQ even better than gross brain size. More on brain imaging and IQ

Another interesting recently published study looks at Sex-Related differences in emotion regulation ability. In general, women have more problems with affective disorders such as depression, and a lesser ability to regulate their emotions. This study used neuroimaging to investigate brain differences related to emotion regulation in males vs. females.

We are becoming more sophisticated in our ability to derive information about population groups from brain imaging studies. More objective IQ tests using brain imaging are within reach, although they are still more expensive and cumbersome than old-fashioned psychometric cognitive studies.

The objective comparison of brain function and capacity between the sexes, and different ethnic groups, is also becoming more realistic — although no less controversial, when conventional dogma is contradicted by scientific studies.

Suggesting that males are statistically better adapted for some types of thinking than females, can get you fired and worse. Suggesting that Europeans and East Asians evolved bigger and smarter brains than did Africans, statistically, can result in a wide range of penalties to your person and your pocketbook. And yet, those are two findings that are relatively uncontroversial among those who study cognition in human populations.

As the tools of brain imaging, genetics, and data analysis grow more powerful, the ability to identify and support such distinctions between population groups will only grow stronger — as long as the Idiocracy can be staved off and mitigated just a few decades longer.

We will always have elites, because humans mate according to basic rules and patterns. Most mothers want their children to be well provided for, as well as healthy and intelligent. They also generally want their children to “look like them.” Because of assortative mating, even if you started with an “equal” society, within a few generations evolution would generate an elite fraction, likely to veer away from the mainstream more widely over time.

Heritability of Brain Volume Change and its Relation to Intelligence (PDF)

A fairly recent study supports the importance of a nation’s “smart fraction”:

…each point of national average IQ raised GDP per capita by $229, but every extra IQ point for the brightest 5% raised GDP by $468.