Remember the grand old days of the USSR? Remember Dr. Strangelove, Alas Babylon, Lucifer’s Hammer, Earth Abides, On the Beach, and the large number of other popular works that both shaped and reflected the widespread nightmares of global nuclear war? Did you think those dark days were gone? Think again. 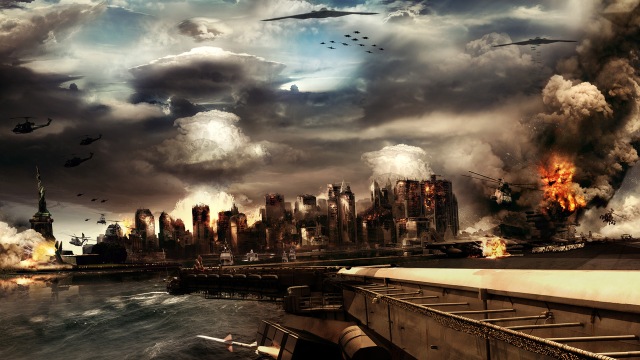 Letting Slip the Dogs of War

Vladimir Putin wants to reclaim for Russia the respect and status the Soviet Union once commanded and has recently undertaken to achieve this by force. His landgrab in Ukraine has been swift and remarkably successful, emboldening him to continue his campaign against Ukraine. Between his high popularity at home and the meek reaction of the West, it might seem that Putin is growing in power. Yet to maintain it, he will have to increasingly rely on violence, including world’s largest nuclear arsenal.

… With its corrupt and oppressive oligarchy, its primitive hydrocarbon economy one-eighth of the size of America’s, and its stifled public sphere, Putin’s Russia has found few eager followers. Unable to generate power by influencing, engaging, and inspiring the world with a compelling ideology, a model of development, or a concept of good life, Putin [resorts] to violence [and intimidation]. __ http://www.worldaffairsjournal.org/article/violence-power-and-nuclear-putin

The spectre of global nuclear war haunted the western and global zeitgeists for decades, from the late 1940s through the early 1990s. After the fall of the USSR, multiple cooperative agreements between the large nuclear powers led to the destruction of a number of nuclear missile warheads. As the size of the global nuclear arsenal was voluntarily reduced, the fear of global nuclear war began to wane.

Now, Russia’s Putin is reversing the trend toward disarmament, and is building a new generation of nuclear threat against anyone who stands against Russia’s grand new imperial expansion. All of this is being done with the tacit acquiescence of US President Obama.

ICBMs are not the only part of Russia’s attempts to retain its nuclear posture. ICBMs form one part of what is known as a nuclear triad, the key concept behind maintaining an effective nuclear deterrent and response. The other two parts are air and submarine launched nuclear weapons. Russia has plans to build eight new Borei class nuclear submarines that will form the core of its sea-based nuclear deterrent and replace the ageing Typhoon, Delta III and IV class submarines. Each Borei is equipped with 16 (later versions may have up to 20) new Bulava SLBM (submarine launched ballistic missile).

… Additionally, Russia is putting priority on the development of a new long range bomber, the PAK-DA, to replace its ageing fleet of Tu-95MS Bear and Tu-160 Blackjack strategic bombers. These will be equipped with new Kh-101 and Kh-102 (nuclear) cruise missiles, increasing their range up to 6,000 miles. Tactical nuclear weapons can also be configured to be loaded onto the new Su-34 fighter bombers recently introduced into service. __ Nuclear Weapons Central to Putin’s Plans

Russia has used its conventional forces to bully its neighbors in the Ukraine, Georgia, and even Sweden. Now it is beginning to use the threat of a resurgent nuclear force to project its nuclear power far beyond its local neighborhood.

Russian aggression in the Baltic has recently been expressed in other ways. NATO interceptors based in Poland and the Baltic states have been sent up more frequently in June because of numerous (at least half a dozen) incidents of Russian military aircraft making unsafe flights over the Baltic Sea. These Russian warplanes were detected by NATO military radar, but had their transponders turned off and had not filed a flight plan with the air controllers who regulate air traffic over the Baltic. With no flight plan and transponders turned off these warplanes were [invisible] to flight controllers. This sort of thing risks collision with commercial aircraft and Russia has ignored criticism of this dangerous practice. __StrategyPage

Putin makes no secret of his willingness to use nuclear weapons against virtually any perceived threat.

“They’ve come with their long-range aviation off the coast of California, they circumnavigated Guam,” he said, showing a picture of a U.S. F-15 fighter “intercepting” a Russian Tu-95 “Bear” bomber off the Pacific island. __ Dogs of War

To this point — other than Georgia and the Ukraine — Putin has relied largely on intimidation and the threat of force. Most of Putin’s grand new arsenal of nuclear weapons by land-sea-and-air are still in development or the early stages of production and de-bugging. Russia’s military industrial infrastructure is good enough to project a cataclysmic threat, but no one really knows what will come out at the end of the assembly line.

Putin remembers how Reagan used the threat of “Star Wars” and the collapse of global oil prices, to help bring down the USSR. He is attempting his own reverse-Reagan strategy, with intimidation of his own along with the reduction of global oil supplies through inflaming tensions in oil producing parts of the third world. He is hoping to use Russia’s energy wealth to build new generations of weaponry — to bring a new international respect to neo-imperialist Russia.

Will Putin’s strategy work to give Russia domination over Europe and much of the rest of the world? Or will it escape his control, running rampant to the point of global nuclear war?

The only area in which Russia still brandishes a global status is its nuclear arsenal. It is the only conceivable reason why Russia still enjoys a permanent seat on the UN Security Council. In essence, Russia inherited the Soviet Union’s super-force without a modicum of super-power responsibility. In fact, Putin looks to be set on dismantling the very postwar order that helped prevent nuclear conflagration during the Cold War. __ Nuclear Putin, Nuclear War?

More: What about Obama’s role in creating chaos in the international order?

The Obama administration’s reset with Russia paid no attention to our Eastern European friends, who were eager to work with America on missile defense and integration within the West. It also ignored that reset essentially undid the punishments accorded Vladimir Putin for his 2008 invasion of Georgia….

Americans did not fully appreciate the costly postwar global order that the United States had established over the last seventy years. Maybe they will start to as they witness it vanish. _ Obama’s Disordered World

Sooner or later, things will move quickly out of control, and all of those other shoes that have been waiting so long to drop, will do so. When that happens, you may want to be in a location where you can be sheltered from fallout, have a good supply of food, water, medicines, fuel, and other necessities — and be prepared to deal with what may be a long, long aftermath.

This is not number 1 on the list of things you should be worried about. But it is there. Again. Thanks to Putin. And Obama. Deal with it.

HFTB. PFTW. It is never too late to have a dangerous childhood.

(Vladimir Putin) got elected the leader of Russia and revived the Soviet era foreign espionage program. This time the goal was stealing commercial secrets and a lot of recently retired Russian KGB (intelligence) officers were back working full time. The espionage led to meddling in the affairs of neighboring nations (another Soviet specialty) and that led to the 2008 annexation of parts of Georgia and 2013 effort to bring Ukraine back under Russian control. The Ukrainian affair did not go according to plan and got rather messy.

Meanwhile many former subject (or “satellite”) states of Russia in Eastern Europe were not surprised by this Russian resurgence and after 1991 made the financial and diplomatic effort to join NATO. This irritated the Russians a great deal, but for people in Eastern Europe who had endured decades of Russian occupation after World War II, pissing off the Russians was a bonus. These East European nations warned their Western neighbors that Russia would soon be up to its old bad habits again and these warnings were downplayed or ignored. Now everyone is a believer and intelligence experts with Russian language skills are in big demand. Many retired or fired Russian experts (the youngest of them in their 60s) are being sought and rehired if possible.

The Cold War isn’t over, it just took a time out. __ StrategyPage