The world continues to cut back on oil but is still dependent on coal, according to this chart produced by Robert Andrews. The decline in oil drop in oil consumption since 1970 is the most notable trend, with the decline continuing steadily since 2000. But the increase in coal consumption over the same period = mainly – China and India – has pretty much cancelled this trend. Natural gas is climbing steadily but the huge increase in the U.S. is not reflected in the rest of hew world. __Coal Replaces Oil

Coal is cheap and dirty — but it works!!! The same cannot be said for big wind and big solar, which are very expensive, and only “work” when they feel like it.

Coal, which now accounts for about 40 percent of all global electricity production, will likely maintain its dominant role for decades to come. Electricity-poor countries, along with those that are electricity-rich, are currently building hundreds of gigawatts of new coal-fired electricity-generation capacity. Since 2003, global coal consumption has increased by about 24.4 million barrels of oil equivalent per day. In absolute terms, that was nine times faster than the growth seen in wind-energy consumption and 40 times that of solar energy __Next Big Future

Billions of people have been brought into the age of electricity by coal-fired power generation. Without reliable and affordable electricity, the whole world begins to share more of the primitive traits of life in sub Saharan Africa or Haiti. 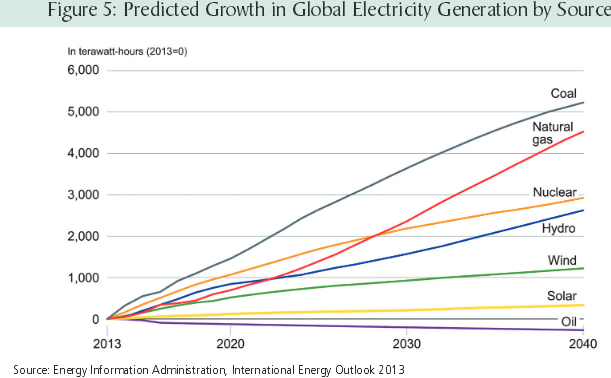 It is true that even the least polluting coal power plants will release significant quantities of CO2 into the atmosphere. But smarter scientists are beginning to wonder about the extreme fear of CO2 that the “climate orthodoxy inner circle” has been promulgating. It seems that climate models are much worse than we thought. CO2 may play a much smaller role in climate than most rational people once believed. In fact, according to some scientists, the global warming apocalypse scare may be one of the biggest hoaxes in history.

How do we explain the apparent dishonesty, stupidity, and corruption being displayed by academic and government climatologists, politicians, celebrities, schoolteachers, and others who have hitched their wagons to the global warming apocalypse steamroller?

There is nothing to explain. Humans are naturally stupid, dishonest, and corrupt when it suits them. Any pursuit that can be tied to generous government grants and political power will acquire a large coterie of scammers and power mongers. This is what we naturally see in climatology and associated programs in government, academia, foundations, environmental lobbies, and inter-governmental agencies such as the UN’s IPCC. Corruption from top to bottom.

While the climate apocalypse remains in fashion among the (largely) superfluous elites, there is little that ordinary people can do about the massive waste of resources and the destructive programming of young minds by schools and media.

But it is important that a close record be kept of those who chose to profit from the destruction being done to economies, scientific pursuits, and minds, under the corrupt banner of CAGW. There must be a reckoning of some type.

In the meantime, smart people will work hard to make sure that the power supplies for their own communities, regions, nations, and continents, are built upon rational foundations. Without the oversight of honest and concerned people, vested corrupt interests will lead societies down the path of ideological poverty and energy starvation.

One extreme example: Germany claims to be in the process of replacing all of its nuclear and fossil fuel power generation infrastructures within a few decades. Deutschland intends to use very high penetration of big wind and big solar to replace the more reliable forms of power. Germany is already suffering from these irrational choices, and will inevitably fail in its aims — since even a small-scale penetration of power grids by unreliable intermittent energy sources can lead to severe loss of quality and reliability of actual power.

When one places the sober reality of power demands in industrial societies next to the “castles in the air” fantasies of wind and solar promoters, one can easily become frightened by how painfully separated from reality our policy-makers and political power-brokers have become. It is as if The Idiocracy has been in operation at higher levels of political power for some time now.

But is it stupidity, or is it corruption? Or both. A corrupt person can be bought using money, power, position, prestige, or with mere fashionable ideological pressure. Sometimes human corruptibility is even more complex, involving threats to the continuing livelihood, life, and health of the protagonist — or his loved ones.

All of us would like to see clean nuclear fusion or clean nuclear fission perfected and made safer, cheaper, and more reliable. Such sources of power would suffice for an expansive and abundant human future over tens of thousands of years or more. In the meantime, we must fight to make sure that our societies continue to have access to affordable and reliable power sources — while fending off the legions of lefty-Luddite green dieoff.orgiasts.

For those with cheap, reliable supplies of short-chain hydrocarbons, home-scale fuel cells are slowly but surely becoming more affordable. These devices will be able to supply all your electrical power, hot water, and perhaps even your space heating needs. If you have a pool, you may even be able to heat it affordably in cooler weather!

Modern governments have chosen the paths of debt, dysgenic decline, and opportunity destruction for their societies. The results of these elite-chosen choices will be multiple and profound.

More: Energy in the US and North America likely to grow more plentiful after US mid-terms

The truth about government subsidies for energy sources across the spectrum

This entry was posted in Climate, coal, Energy and tagged coal, energy. Bookmark the permalink.

1 Response to Global Energy Use: Coal Rises, Oil Falls in % of Total Energy 2013