Nuclear War vs. Recession in the Land of Slaves and Tsars

I am becoming a little less secure in my belief that nukes will never be used.

There are three reasons for my anxiety. First, the spread of nuclear weapons to unstable countries such as Pakistan and North Korea. Second, the growing body of evidence about how close the world has come, at various times, to nuclear conflict. My third reason for worry is more immediate: a significant increase in threatening nuclear talk from Russia.

Both in private and in public, the Russians are now making increasingly explicit references to their country’s nuclear arsenal. A couple of weeks ago, I witnessed a prominent Russian warn an audience, at a private seminar in Washington, that “President Putin has put the nuclear gun on the table.” The Russian president has indeed told an audience at home that outsiders should not “mess with us”, because “Russia is one of the leading nuclear powers”.

Last week, Pravda – the Soviet mouthpiece during the cold war – ran an article headlined, “Russia Prepares Nuclear Surprise for Nato”. It crowed that Russia has parity with the US in strategic nuclear weapons and boasted: “As for tactical nuclear weapons, the superiority of modern-day Russia over Nato is even stronger. The Americans are well aware of this. They were convinced before that Russia would never rise again. Now it is too late.” _Nuclear War is Back 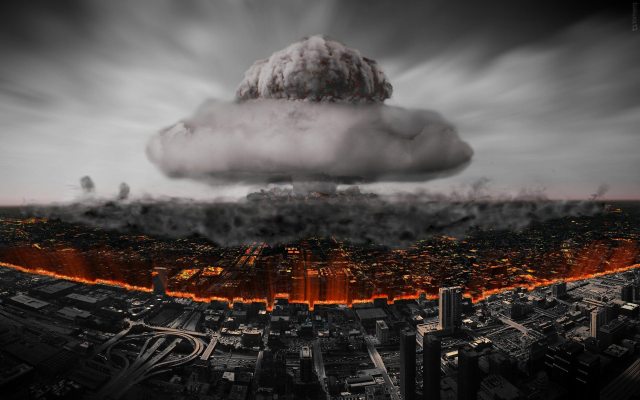 This is one piece of Putin’s propaganda puzzle presented to the western world. The threat of nuclear war goes along with the bomber flight airshows and other Putin propaganda extravaganzas. Costly, but the rubes eat it up.

Russia was already slipping into recession in May 2014 — although the massive Russ propaganda machine will not admit it. Western media will continue to be spoonfed the mantra that Russian government spending is under control, and the Russian economy is doing just fine without strong commercial and financial ties with the EU and the Anglosphere. But remember: State propaganda is the second largest Russian industry, behind oil & gas. Everything one hears from Russian sources complies with the propaganda mandate — under threat of death to dissident voices, of course.

There’s a 70 percent chance of a recession in the next 12 months, according to the median estimate of 27 economists in a survey Oct. 30. That’s the highest since Bloomberg started tracking the figure two years ago, up from 60 percent last month.

Putin has returned Russia to the era of gunboat diplomacy.

Deploying four very old warships to the Australian coast does not exactly impress anyone, and if the U.S. had sent a couple of carrier battle groups to those same waters, the Russian ships would have looked like so many tugboats by comparison.

The same is true of Russian strategic bombers patrolling the Gulf of Mexico. If the Defense Ministry carries out Shoigu’s instructions, Russian bombers will begin making regular patrols of the Caribbean Sea and the Gulf of Mexico. Russian strategic aircraft already fly “around the corner,” skirting Scandinavia and darting up to the Faroe Islands where they simulate a cruise missile attack against U.S. territory.

Now Moscow threatens to the do the same in the Caribbean. The problem is that, in contrast with the almost empty skies in the far north, in the south the Russian bombers will have to operate amid extremely heavy air traffic. That greatly increases the likelihood of a wide range of incidents, any one of which could have disastrous consequences.

The article goes on to describe the strategic lunacy of Putin’s Potemkin gunboat diplomacy.

In Moscow, uncertainty is growing over where Putin’s rush to war is heading. Will Putin actually nuke the cities of Europe just to prove his manliness, or is there still a tiny streak of sanity and decency to be found in the Kremlin?

By establishing a frozen conflict in Donbas, Russia has jammed a thorn into Ukraine’s side and, in the short run, complicated relations between Ukraine’s President Petro Poroshenko and the country’s prime minister, Arseniy Yatsenyuk. But it has also guaranteed that, in the longer run, the Ukrainian state will be reconsolidated around anti-Russian sentiment and policies – meaning that Russia will be unable to normalize its relations with Ukraine for decades.

Putin had Ukraine over a barrel. Simple seduction would have sufficed to tighten economic and political ties between the two nations. But Putin would settle for nothing less than rape, theft, and brutalisation. Such behaviour is the mark of a thuggish fool.

In the meantime, Putin continues to destroy alliances across Europe, particularly in Germany. Simultaneously, Russia is over-extending itself all along its border with Easter Europe, from north to south.

All of this from a nation with an economy that is smaller than that of a single US state — California. __ https://alfinnextlevel.wordpress.com/2014/08/13/russian-economy-smaller-than-californias/

It is clear that Russia cannot afford its superpower pretensions. But since Putin seems unlikely to submit to reality, the possibility of a Russian instigated nuclear war grows more realistic as Russia continues to decline economically, demographically, militarily, politically, medically, and morally.

Russia was already experiencing slow motion collapse from corruption / mismanagement, capital flight, brain drain, loss of its fertile female population, depopulation and loss of control in Siberia, a destructive influx of uneducable Muslims from Central Asia and the Caucasus, high death rates and low birth rates among ethnic Russians, a collapse of economic opportunity, a collapse of speech and assembly rights, and a long list of problems even more ominous to Russia’s long term future.

Now as Putin’s sustained global temper tantrum intensifies, Russia is doomed to fail even sooner than without his help.

Will Kaliningrad Secede from Russia in yet another Colour Revolution? ….

The Russian Fear of Colour Revolutions …..

Fear of revolution is a constant worry for tyrants such as Putin.

Russia’s bloody headlong rush to disaster is driving more neighbors into the arms of NATO.

Who would have guessed back in 2000 that Putin would prove to be such a clumsy, suicidal fool?

The Russian president cannot help but realize that everything has somehow gone wrong and that he must make some sort of course correction, even if it means openly declaring an inhuman dictatorship. The problem is that he is not alone in the car: He is surrounded by powerful individuals who are perfectly happy with the current state of affairs and have no intention of letting him make any changes whatsoever. _MT

Putin has painted himself into a corner

Russia stands to lose $140 billion a year as a result of lower oil prices and US and European sanctions over the Ukrainian crisis, Finance Minister Anton Siluanov said today. “We’ve seen a contraction of capital inflows into the country,” he said at a conference in Moscow. “We’re losing about $40 billion a year because of geopolitical sanctions, and we’re losing about $90 billion to $100 billion on the basis of a 30% decline in oil prices.”

Outside of the inner circle of power and the massive spy and propaganda machines, ordinary Russians are feeling the pain of Putin’s reckless aggression.

An analysis of the coming Russian invasion and attempted conquest of all of Ukraine Putin’s inability to let go of the grand Eurasian Empire delusion may be the death of Europe.

Looking at Putin’s Propaganda Apparatus: views of a former Soviet citizen and expatriate Propaganda is what the USSR did best. Putin cannot survive without a massive propaganda blitz, and masses of gullible naifs on both sides of the new iron curtain.

Low oil prices bring Putin to his moment of truth

9 Responses to Nuclear War vs. Recession in the Land of Slaves and Tsars