Simple 2 Step Approach to Building an Artificial Brain that Thinks

Stanford’s Dorian Aur is proposing a new way to build a thinking artificial brain inside the lab. It is a two-step process that appears simple at first glance:

The first phase will require growing a full size brain either from natural stem cells or from induced pluripotent cells. Providing nutrients, oxygen and environmental interaction is needed to shape the structure of the evolving human brain and control spatial organization of cells .

The second phase will create a virtual world in which the evolving human brain can be trained to learn and experience live scenes following a specific gradual program. It is likely that after training the hybrid system will be able to mimic human behavior in the ‘real’ world and trigger conscious experience. _Can We Build a Conscious Machine? 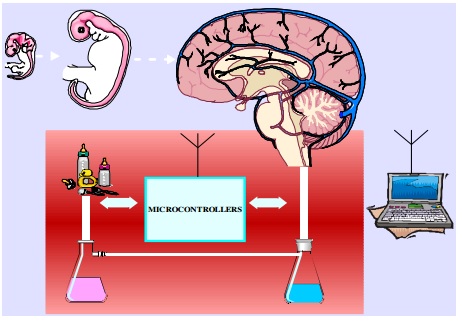 Long-time Al Fin readers will expect us to take a sceptical attitude toward Dorian Aur’s proposal. And they would be mostly right in such an expectation.

Aur’s brain would be of a hybrid nature. Its development and ongoing operation would be dependent upon the actions of small integrated bio-sensors working with at least one (and probably more than one) powerful digital computer. As described by Aur, the brain would spontaneously develop self-assembling “cerebral organoids” into a functioning system, under a “sensorimotor flux” generated by the digital computer system. This “sensorimotor flux” is described as being similar to what a newborn baby is exposed to.

“Our brain is a formidable computing machine,” Aur told me. “Bill Gates said: If you invent a breakthrough in artificial intelligence, so machines can learn, that is worth 10 Microsofts’ and he is right. Building intelligent—conscious—systems that can talk, move, and solve problems like us will be the goal of many companies in the future. Such machine would be ‘laughing of the mechanic aspects of its being.’ That’s the machine that is worth far more than 10 Microsofts.”

“A hybrid system can be designed to include an evolving brain equipped with digital computers that maintain homeostasis and provide the right amount of nutrients and oxygen for the brain growth,” Aur writes in the paper. “Shaping the structure of the evolving brain will be progressively achieved by controlling spatial organization of various types of cells.” __Artificial Brains from Biological Building Blocks

Aur suggests that thousands of subtle, so-far undiscovered components of consciousness, might well become clear as the lab-grown brain is exposed to more and more complex elements of human reality.

Independent of the technological approach, the projects differ substantially in the level of bio-realism and computational sophistication in their emulation of neurons and synapses _PDF Brain Emulation Challenges (a review)

Understanding even the most basic levels of how the brain generates consciousness is difficult:

The ganglion cells in the retina do not project directly to the cortex but relay signals through neurons in the thalamus, deep within the brain’s midsection. This region in turn must activate 100 million cells in the visual cortex in each hemisphere at the back of the brain before the messages are sent to higher brain areas for conscious interpretation.

… Attention—a central facet of cognition—may also have its physical underpinnings in sequences of synchronized spikes. It appears that such synchrony acts to emphasize the importance of a particular perception or memory passing through conscious awareness. Robert Desimone, now at the Massachusetts Institute of Technology, and his colleagues have shown that when monkeys pay attention to a given stimulus, the number of cortical neurons that fire synchronized spikes in the gamma band of frequencies (30 to 80 hertz) increases, and the rate at which they fire rises as well. Pascal Fries of the Ernst Strüngmann Institute for Neuroscience in cooperation with the Max Planck Society in Frankfurt found evidence for gamma-band signaling between distant cortical areas. _Language of the Brain

Aur suspects that his lab-grown bio-brain will spontaneously exhibit patterns of synchronous local and long-distance communication across the brain, unlike the wholly digitally-emulated brains of other projects. Lab-grown hybrid brains should also display dozens of other types of signaling that yet remain unknown to neuroscientists and cognitive scientists, who are trying to emulate the brain in order to generate machine consciousness.

This is where things get interesting: Aur’s lab-grown brain will presumably incorporate thousands of micro/nano integrated sensors and actuators. These sensor/actuator networks will be crucial in the brain development stage for growth regulation, but they may be equally crucial in the “consciousness development” stage after the brain has reached final anatomical development. At this “post-birth” stage, the hybrid brain will be under the influence of an evolving computer-generated “sensorimotor flux” that becomes more sophisticated and realistic over time.

During this stage of “consciousness development,” experimenters will be able to monitor (and alter in real time) the function of the lab-grown hybrid brain at levels of detail — physiology, molecular dynamics, gene expression, electrical dynamics, and more — currently inconceivable to neuroscientists working with other types of neuron based systems and preparations.

As it stands, the idea is just an embryo in the making. But it has potential to become more.

Al Fin cognitive scientists are on record as stating that the earliest non-human intelligences would need to be evolved, rather than programmed, borrowing heavily from the example of the human brain as the only proof of concept of semi-intelligence currently known.

We are also on record suggesting that the most fruitful approach to artificial intelligence would be to break the problem into modules, finding ways to fit them together into more and more complex wholes. Such a project would involve devising “neural prostheses” capable of substituting for damaged brain modules — such as the cerebellum, hippocampus, parts of the basal ganglia, brain stem nuclei, white matter pathways, and different types of neo-cortex. Such prostheses would be designed to replace brain tissue damaged by stroke, degenerative processes, traumatic brain injury, abscesses, and tumours.

Are we at the Al Fin Institutes of Advanced Cognitive Sciences sceptical? Of course we are. But we are also intrigued by the possibilities, if the problem is approached intelligently.

Can We Build an Intelligent Machine? PDF … Dorian Aur

A massive system is required to emulate the brain: none of the projects we discuss have come close to this scale at present. The largest supercomputers and computer clusters today have thousands of processors, while the human cortex has tens of billions of neurons and a quadrillion synapses. We are a long way from cortex scale, even if one computer processor could emulate thousands of neurons, and, as we will see, it is unclear whether that emulation would be sufficiently accurate.

Language of the Brain Sejnowski and Delbruck

Conclusion: It goes without saying that the algorithmic approach to artificial intelligence is doomed to failure. But the “brain emulation” approach is by no means guaranteed to succeed. Most of the critical decisions that need to be made in evolving a successful brain emulator have not yet been conceived, much less made. Whether the bulk of the work can be completed by the turn of the next century, is yet to be determined.