Europe is faced with a serious brain drain problem. Since the introduction of the euro, more qualified workers have left Europe than have newly arrived. In the pre-crisis years, the 15 countries that adopted the euro currency exhibited, on average, a net loss of around 120,000 postsecondary-educated workers each year. They were mainly attracted by the United States’ higher salaries, world-class universities, and efficient bureaucracy. In the years leading up to the Great Recession, from 2000 to 2008, Italy lost around 1.5 million professionals — many of them with very advanced skills. __ Foreign Affairs 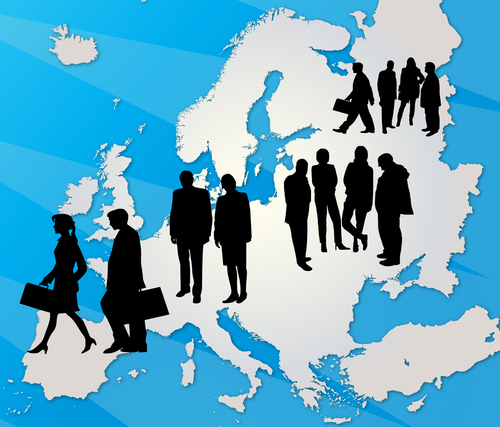 Not as many people are familiar with Europe’s brain drain problem. In fact, Europe is undergoing two simultaneous brain drains: The first involves the movement of highly talented people from one European country to another. This “within-Europe” brain drain is not considered as serious a problem as the other brain drain: Migration of talented Europeans to non-European countries.

Out-migration of European scientists, engineers, entrepreneurs, and sports/entertainment celebrities has long been a sore point for European leaders. But a new out-migration of wealthy and talented Europeans threatens to deplete the continent’s human capital even further.

Russia is no longer Mother Russia without its violinists, poets, and novelists. Former Soviet scientists and engineers helped pioneer the high-tech wizardry originating not from Moscow, but Tel Aviv. The Jewish Shahs in Los Angeles are a reminder to Iran of a far more valuable weapon they once had, and then lost. Syrian Jews were thankfully spared the present mass murders in their former country, and along the way they invented the designer jean industry. Polish, Lithuanian, and Ukrainian Jews left a cavernous cultural hole behind where they once lived and then proceeded to invent the American songbook, film and fashion industries — not to mention stand-up comedy.

Jews have become like “canaries in a coal mine.” History teaches that it is a sign of serious decline when Jews are routinely persecuted and killed. Europe should have learned that lesson by now.

Fanatical muslims and neo-nazis represent a net negative to any country, and any population would be better off without them. Jews, on the other hand, tend to help build science, culture, advanced medical care, advanced engineering, and other net benefits.

But Europe is not only losing its Jews. It is also losing non-Jewish scientists, engineers, highly skilled medical clinicians and researchers, industrialists, and the kind of entrepreneurial minds that build multi-billion dollar enterprises. When one combines this loss of talent with the very low birth rates among ethnic Europeans, the future of Europe might seem bleak to some observers. Particularly if Europe does nothing to correct the underlying policies of immigration, taxation, energy, etc. that are leading to inexorable decline.

The flow of talent worldwide reflects shifting tides of opportunity and prosperity. These shifts have occurred for as long as human civilisations have existed. But in the modern age of rapid technological development and implementation, shifts in talent can lead to multi-decadal shifts in global dominance for particular nations or cultures. It is something to pay attention to, and to strive to understand.

Ultimately, Europeans need to acknowledge that only radical reforms can reverse the tide of the ongoing brain drain. It won’t be easy to lure the most talented Europeans back home, but the continent has no other choice. Otherwise, talented people — regardless of the passports they hold — will shy away from Europe, to the detriment of the continent’s present and future economy. __Edoardo Campanella

This entry was posted in Demographics, Europe, Russia and tagged Capital Flight. Bookmark the permalink.