A growing body of research has identified the presence of multiple brain networks supporting human behavior. These networks include a salience network involving dorsal anterior cingulate and anterior insula regions thought to be relevant to attending to survival-relevant events in the environment; a central executive network (CEN) consisting of regions in the middle and inferior prefrontal and parietal cortices engaged by many higher level cognitive tasks and thought to be involved in adaptive cognitive control; and a default mode network (DMN) consisting of regions in medial frontal cortex and posterior cingulate, among others, that reliably reduce their activity during active cognitive demands and which may be involved in attention to internal emotional states or self-referential processing[1]. ___ http://ccpweb.wustl.edu/pdfs/2013barch-cell.pdf

The network approach to brain function and human cognition is opening a new window into the conceptualisation of “human intelligence.” The model of 3 interacting brain networks — the Default Mode Network (mind wandering), the Salience Network (taking note of change or something of possible import), and the Central Executive Network (on-task focusing of attention) — provides a foothold onto a high and steep edifice of knowledge yet to be climbed. 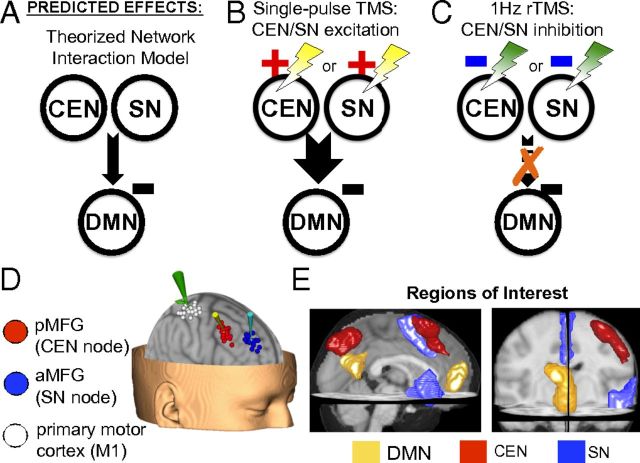 Information processing during human cognitive and emotional operations is thought to involve the dynamic interplay of several large-scale neural networks, including the fronto-parietal central executive network (CEN), cingulo-opercular salience network (SN), and the medial prefrontal-medial parietal default mode networks (DMN). It has been theorized that there is a causal neural mechanism by which the CEN/SN negatively regulate the DMN. Support for this idea has come from correlational neuroimaging studies; however, direct evidence for this neural mechanism is lacking. Here we undertook a direct test of this mechanism by combining transcranial magnetic stimulation (TMS) with functional MRI to causally excite or inhibit TMS-accessible prefrontal nodes within the CEN or SN and determine consequent effects on the DMN. Single-pulse excitatory stimulations delivered to only the CEN node induced negative DMN connectivity with the CEN and SN, consistent with the CEN/SN’s hypothesized negative regulation of the DMN. Conversely, low-frequency inhibitory repetitive TMS to the CEN node resulted in a shift of DMN signal from its normally low-frequency range to a higher frequency, suggesting disinhibition of DMN activity. __PNAS Abstract

The ability to selectively alter the functioning of specific areas of the brain with TMS (transcranial magnetic stimulation) while monitoring the resulting effect on global brain function, is a powerful research tool. Combined with increasingly sophisticated brain network theory, such tools should lead to a rapid expansion in our knowledge of what makes “human intelligence” work.

Large scale brain network research suggests that {cognitive} functioning is the result of interactions or communication between different brain systems distributed throughout the brain. That is, when performing a particular task, just one isolated brain area is not working alone. Instead, different areas of the brain, often far apart from each other within the [geographic] space of the brain, are communicating through a fast-paced [synchronized] set of brain signals. These networks can be considered preferred pathways for sending signals back and forth to perform a specific set of cognitive or motor behaviors. – __ http://www.creativitypost.com/psychology/the_brain_as_a_network_focusing_your_network 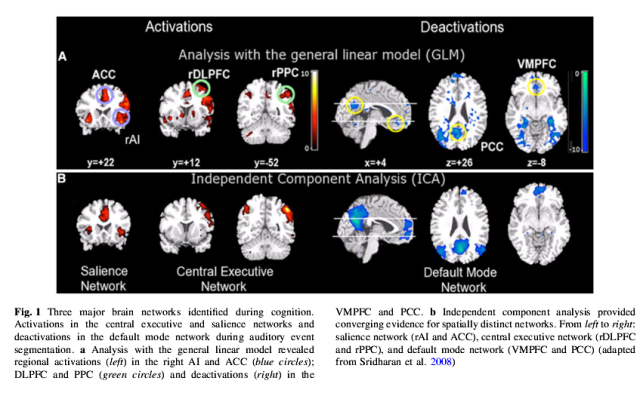 A network approach to brain function provides a principled approach to predicting core functions and deficits associated with specific brain systems. It is becoming increasingly apparent that cognitive neuroscience needs to go beyond the mapping of complex cognitive and psychological constructs onto individual brain areas. Nowhere is this more apparent than the study of insular cortex function. In this article, we take a systems neuroscience view that considers cognitive function to arise from the interactions of brain areas in large-scale distributed networks (Bressler1995; Dosenbach et al.2008; Goldman-Rakic1995; McIntosh2000; Mesulam1998). The network paradigm is becoming increasingly useful for understanding the neural underpinnings of cognition (Fuster2006). Furthermore, a consensus is now emerging that the key to understanding the functions of any specific brain region lies in understanding how its connectivity differs from the pattern of connections of other functionally related brain areas (Passingham et al.2002).

Even with the best tools of neuroimaging, the many recognised — and many more yet-to-be-recognised — brain networks do not reveal themselves easily. And it is very likely that the network organisation of the brain is different in different persons, and in different breeding groups of persons.

By presenting several research studies related to these brain networks, I risk being accused of repetition. But the idea is central to a new understanding of human cognition, and I want to give readers the benefit of different perspectives to the basic concept.

Learning to understand how these networks develop in children is one of the most important tasks ahead for educational psychologists. The paper linked below looks into that phenomenon.

Using functional magnetic resonance imaging (fMRI), we examined the Default Mode Network (DMN) and the Central Executive Network (CEN) at ages 10 and 13 in a longitudinal sample of 45 participants. In the DMN, participants showed increasing integration (i.e., stronger within-network correlations) between the posterior cingulate cortex (PCC) and the medial prefrontal cortex. During this time frame participants also showed increased segregation (i.e., weaker between-network correlations) between the PCC and the CEN. Similarly, from age 10 to 13, participants showed increased connectivity between the dorsolateral prefrontal cortex and other CEN nodes, as well as increasing DMN segregation. IQ was significantly positively related to CEN integration at age 10, and between-network segregation at both ages. These findings highlight early adolescence as a period of significant maturation for the brain’s functional architecture and demonstrate the utility of longitudinal designs to investigate neural network development. ___ http://www.sciencedirect.com/science/article/pii/S187892931400053X

We need to be able to “stay on task” (Central Executive Network — CEN), but we often also need to be able to “let the mind wander” (Default Mode Network — DMN) in case there is something more important we may need to attend to. The Salience Network seems to provide the link and the switching control between the CEN and the DMN. (The role that the insula plays in the salience network is fascinating, but beyond the scope of this post.)

There are multiple attention and executive networks, multiple default mode networks, and certainly multiple salience networks. Once you understand how the “basic 3 networks” interact, you can begin to see how multiple similar networks might interact and compete.

Given that the complex interaction of these intricate brain networks makes humans what they are, how did the networks evolve in the first place? One interesting and obscure theory suggests that retroviruses may provide a clue:

… Johan Jakobsson and his colleagues show that retroviruses seem to play a central role in the basic functions of the brain, more specifically in the regulation of which genes are to be expressed, and when. The findings indicate that, over the course of evolution, the viruses took an increasingly firm hold on the steering wheel in our cellular machinery. The reason the viruses are activated specifically in the brain is probably due to the fact that tumours cannot form in nerve cells, unlike in other tissues.

“We have been able to observe that these viruses are activated specifically in the brain cells and have an important regulatory role. We believe that the role of retroviruses can contribute to explaining why brain cells in particular are so dynamic and multifaceted in their function. It may also be the case that the viruses’ more or less complex functions in various species can help us to understand why we are so different”, says Johan Jakobsson, head of the research team for molecular neurogenetics at Lund University. __ Do viruses make us smarter?

These retroviruses are “endogenous,” meaning that they have taken up residence inside our genomes. In fact, endogenous retroviruses make up about 5% of our genomes. Most scientists never expected them to play a significant role in brain function and brain evolution. But some scientists are beginning to change their minds about that.

Do our “inner viruses” exert a strong control over how our brains developed — both on the species level and on an individual level? (Ontogeny “recapitulates” phylogeny…) Difficult to say.

The brain is a highly complex organ on many physical and logical levels and scales. If we are to gain a better understanding of our brains, and if we are to come closer to constructing working artificial brains, we must explore this complexity on most of these physical and logical levels — even if much of our exploration seems to lead to culs de sac.

Some knowledge, if widespread, is highly disruptive. Knowledge about how the human brain works — in all its varieties — falls into the “disruptive” category.

Two popular neurocognitive books are worth reading for a broader perspective on how different brain regions and brain networks interact:

Antonio Damasio’s “Self Comes to Mind”

There is no single key to understanding consciousness or human intelligence. If one is interested, the topic can provide more than a lifetime of material for mental integration, level by level.

Attn: The above link may not work with all browsers. Let me know if it doesn’t work for you.

This entry was posted in Cognition, Human Brain and tagged Brain. Bookmark the permalink.