Russia has turned Internet trolling into a profession with full time workers getting paid $700 to $1,000 a month (plus bonuses for especially effective efforts) and working in office settings rather than from home. These professional troops mainly write in Russian, to encourage pro-government opinions among Russian Internet users. The government also has an international program that pays a lot more because of the need for good foreign language skills. That means the ability to “write like a native” not only in terms of grammar but in terms of the Internet idioms unique to each language or country. The key here is not so come off as a Russian troll but a local.

… Russia is adopting the Chinese technique of harnessing the enthusiasm of pro-government volunteers. As happened elsewhere, bloggers and posters with a large following are also enticed to be pro-government, for a fee (or perhaps because of a few threats). __Information War of the Trolls

Sometimes just a gentle reminder to bloggers and journalists — of the unhappy ends of earlier Putin opponents — can get bloggers, posters, and journalists back on track.

Remember those Russian troops in Ukraine that Putin claims are not really in Ukraine?

… portions of the Russian 15th Mechanized Infantry Brigade, 8th Mechanized Infantry Brigade, 331st Airborne Regiment and the 98th Airborne Division [are] operating inside Ukraine. It was noted that Russia moves these units in and out, rarely keeping Russian units in eastern Ukraine for more than a few months. There are some attempts to hide the fact that these Russian soldiers are Russians, but these efforts are not diligently carried out and given all the cell phone cameras around it is easier for anti-Russian civilians in rebel controlled areas to collect and pass on evidence.

… Since Russia does not admit it has troops inside Ukraine, the hundreds of Russian soldiers killed there so far have been coming back in coffins and the families are increasingly angry about the government secrecy about how their sons died and where. Despite strenuous efforts to suppress news of dead soldiers the Internet allows the news to get around and the families of dead soldiers to get in touch with each other and organize protests and unrest the government does not want. __Russian Forces Strained

The internet trolls and official Kremlin propaganda continue to deny the obvious — Russian troops are fighting and dying in Ukraine. Most Russians do not approve of this covert war against Slavic cousins, nor the ongoing deeply covert war against other former Soviet republics.

Russian manufacturing activity shrank for the fifth straight month in April, but at a slower pace than in March, a survey showed on Tuesday.

The HSBC purchasing managers’ index (PMI) rose to 48.9 from 48.1 in March but remained below the 50 mark. A reading above 50 signals growth in activity.

The index continued to be weighed down by declines in new orders and employment… a full recovery remained some way off given that survey data pointed to the sharpest monthly fall in new orders in almost six years.

The Kremlin is struggling to minimise political and economic fallout from Putin’s ongoing bloody invasion of Ukraine. But time is against the little big man. He may need to blow up a few more Moscow apartment buildings, or crash the planes of a few more hockey teams, to make sure the public gets back in line — or nuke a few cities in Eastern Europe. Let’s hope he does none of those things, but with Putin, one never knows.

At this time, all of Europe stands under threat from Putin’s desperate clinging to power. 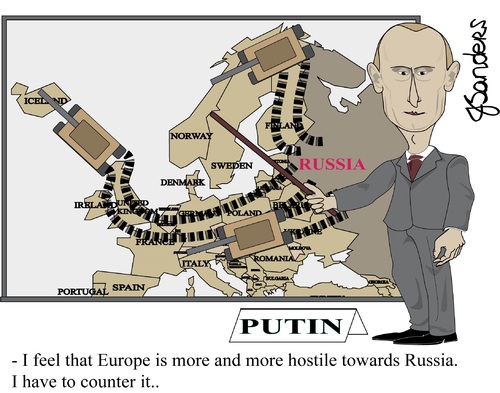 A Disingenuous “Feeling” of Threat
http://www.toonpool.com/cartoons/Putin%20Europe%20invasion%20en_220662

Oil prices are not likely to rise quickly enough to bail out the corrupt Putin circle of mafia chieftains and siloviki — who have become the new oligarchs. The economy and demographics of Russia were already on a deadly downward spiral well before the current oil price drop and international sanctions. Invest in Russia only if you have connections to top officials, plenty of bribe money, and plenty of money to lose.

The EU is broadening economic ties to Ukraine, and the Ukrainian military is slowly growing out of its Soviet-era incompetence. When Putin decides to heat up the bloody war against the Slavic cousins, Russia will require many more coffins.

Russians are singing: “Hard times, hard times, come again no more,” but apparently in vain, as their fearless leader continues down the path of war and decline.