Russia Haunted by Spectre of Disintegration 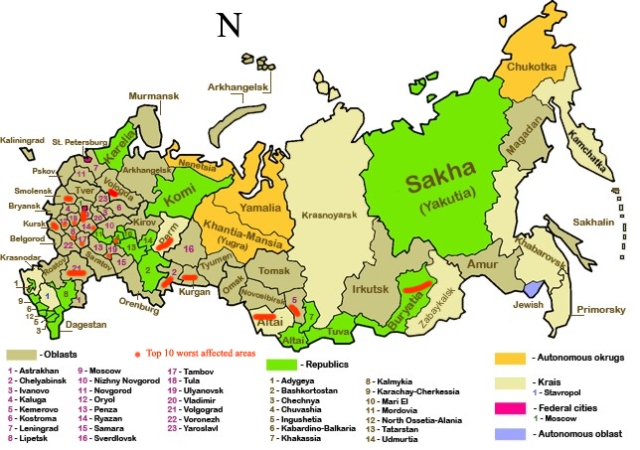 The spectre of disintegration is already haunting Russia. Politicians and pundits are scared to discuss it publicly. Shortly after annexing Crimea and stirring separatism in eastern Ukraine, the Kremlin introduced a law which makes “incitement of any action undermining Russia’s own territorial integrity” a criminal offence. Yet the greatest threat to Russia’s territorial integrity is posed by the Kremlin itself and its policies in Ukraine.

By breaking the post-Soviet borders, Mr Putin opened a Pandora’s box. If Crimea “historically” belongs to Russia as he has claimed, what about Kaliningrad, the former Königsberg, an exclave which Germany lost to Russia after the second world war? Should not eastern Karelia, which Finland ceded to the Soviet Union after the winter war in 1940, be Finnish and the Kuril Islands return to Japan?

Even more perilously for Russia’s future, Mr Putin brought into motion forces that thrive on war and nationalism. These are not the forces of imperial expansion—Russia lacks the dynamism, resources and vision that empire-building requires. They are forces of chaos and disorganisation. Eastern Ukraine has turned into a nest of criminals and racketeers. They cannot spread Russian civilisation, but they can spread anarchy. __ Russia Breaks Up 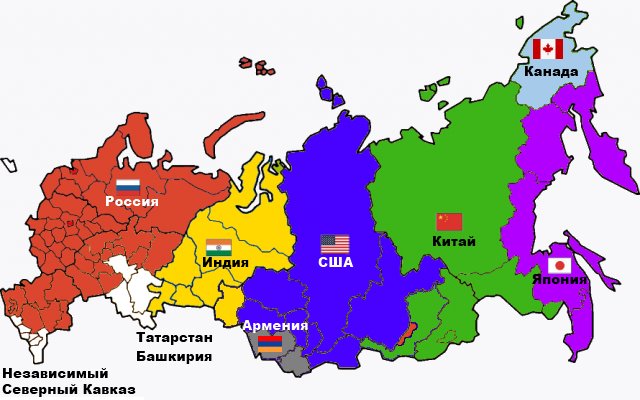 In short, Russia under Mr Putin is much more fragile than it looks. Vyacheslav Volodin, his deputy chief of staff, recently equated Mr Putin with Russia: “No Putin, no Russia,” he said. It is hard to think of a worse indictment. __ After Putin, the Deluge

China is investing in Central Asia, Ukraine, Belarus, and in the Russian Far East. In Short, China is anticipating the need to pre-position its assets and forces, before the disintegration of Putin’s Russia.

China recognizes the benefits of balancing its trade linkages with Russia and Ukraine, and is keen to embrace lower-cost imports from Ukraine’s crisis-ridden economy. The fact that China is keeping its diplomatic and economic strategies separate means that Ukraine can pivot towards China to help rebuild itself economically from the ashes of war. Chinese capital can facilitate the expansion of Ukraine’s growth industries like information technology and real estate construction, in addition to making China a reliable new market for Ukraine’s agricultural exports.

Under Putin, Russia is becoming far more dependent upon China. The dependency is, in fact, growing irreversible. It is not clear how far China will go to take advantage.

‘My forecast is rather a sad one,’ he said. ‘I am not even sure if I should voice it – for fear of spoiling people’s moods. I am afraid that beginning from March 2014 we have determined the destiny of our country for a long time. On one hand, this destiny will be about economic and technological downfall, and on the other on our rising dependency on China. This dependency might turn into a truly dominant one.’

He fears China exploiting a switch which has seen Russia angle its trade towards Beijing and away from Western countries which have imposed sanctions on Moscow.

‘I know just too well how good China can exploit it,’ he said. ‘These days we have literally cut ourselves off from the Northern – or Western – civilisation.’ ___ Former Head of Moscow FSB Speaks 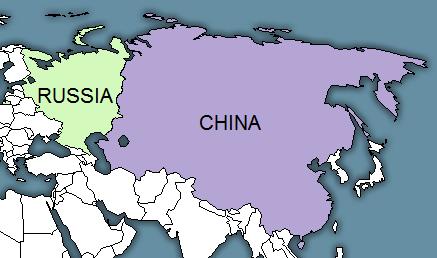 A Natural Relentless Ongoing Incursion by China Into the Former Russia

China will reclaim large parts of Siberia. But which parts, and how large?

The 1.35 billion Chinese people south of the border outnumber Russia’s 144 million almost 10 to 1. The discrepancy is even starker for Siberia on its own, home to barely 38 million people, and especially the border area, where only 6 million Russians face over 90 million Chinese. With intermarriage, trade and investment across that border, Siberians have realized that, for better or for worse, Beijing is a lot closer than Moscow.

The vast expanses of Siberia would provide not just room for China’s huddled masses, now squeezed into the coastal half of their country by the mountains and deserts of western China. The land is already providing China, “the factory of the world,” with much of its raw materials, especially oil, gas and timber. Increasingly, Chinese-owned factories in Siberia churn out finished goods, as if the region already were a part of the Middle Kingdom’s economy.

One day, China might want the globe to match the reality. ___ China Will Reclaim Siberia

It looks as if China has plans to wrest influence in Central Asia away from Russia. Further, its investments in Siberia, Ukraine, Belarus, etc. suggest that China is preparing for a long term future where Russia may as well not exist at all.

But first, China will have to get past some rather serious economic problems of its own. Regardless, the only way for Russia to prevent the slow absorption of Siberia by China would be to forcibly relocate ethnic Russians from west of the Urals — and strongly induce them to have multiple children per woman. Such a move is not likely to be well received by the neo-serfs of Putin’s Russia.

Most of the border region — an area roughly the size of Iran — used to be Chinese. Russia took the territory in 1858 and 1860 with the Treaties of Aigun and Peking, respectively. Of all of the unequal treaties forced upon the Qing dynasty by outside powers in the 19th century, these are the only two China has not managed to overcome. China and Russia signed a border agreement in 1999, but the Beijing government has never formally accepted the Aigun and Peking treaties. __ ABC News

As Garri Kasparov has pointed out, the longer Putin hangs around, the stronger the likelihood that Russia will disintegrate. 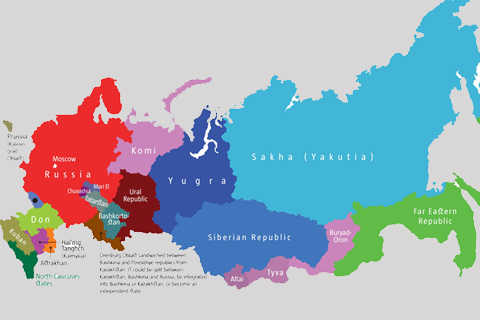 Disintegration of the Russian Federation could be triggered by just a few federal subjects that are potential hotbeds of separatism. They already have plenty of ethnic and/or economic reasons to separate from Moscow. If such sentiments escalated, Russia’s further existence as a single state would be impossible due to a number of reasons.

The first such province is the modern Ural Federal District that is clearly divided into two specialized regions: Tyumen Oblast (or Yugra comprised of the oil-rich Khanty-Mansi Autonomous Okrug and Yamalo-Nenets Autonomous Okrug) and the steelwork-dominated Ural including Chelyabinsk and Sverdlovsk oblasts. Adjacent is Kurgan Oblast dominated by industrial machine building.

Tyumen Oblast with its two autonomous okrugs has the most abundant resources in Russia. It provides 2/3 of all Russian oil and over 90% of natural gas (Gazprom is nothing without it). Deprived of its minerals, the rest of Russia would automatically turn into a huge importer of natural gas and would hardly be able to export oil or oil products, but would most likely have to import those as well. The population of Tyumen Oblast was a mere 3.55 million at the beginning of 2014, with just 2.15 million in the autonomous okrugs that extract oil and gas. This makes the region comparable to Kuwait in terms of oil extraction per capita (Kuwait’s population is 2.7 million people). The only difference is that Tyumen Oblast extracts 3.5 times more oil and over 150 more gas than Kuwait does.

Moscow is currently taking all rent from these riches, channeling it into confrontation with the outer world and support of depressed regions inside Russia, including a toll to North Caucasus republics. Thus, even though ethnic Russians make up an absolute majority in Tyumen Oblast, they have sufficient socio-economic motivation to get independence. Remote as it is from China, it faces minimum Chinese threat. The scale of its integration with European economy opens vast possibilities for entering the protectorate of the EU and NATO. That option would be much cheaper for the region compared to the funding of all Russia and its growing spending on the military industry and external expansion. __ How Russia Might Disintegrate

Former GRU officer Viktor Suvorov predicts that it will take Russia about 10 years to disintegrate.

Even before Putin “jumped the shark” last year, Russia was in rapid decline on several fronts. Putin has merely greased the skids.

All indications show that the Russian Far East is fast becoming (if it has not already become) economically dependent on China. Its future is in the hands of the local Chinese, not Russian local authorities. The Chinese cultivate the land, which the Russians are not motivated to do on their own. Local authorities and businessmen don’t complain about dwindling Russian manpower beyond the Amur River as they can easily replace native workers with Chinese who are willing to work 12 hours a day or more.

These short-term economic benefits for individual Russians are accompanied by tangible social trends. In the late 1990s, Russians found it unthinkable to marry Chinese, but today, Russian women hardly hesitate to take Chinese husbands, who are perceived as harder workers and softer drinkers than Russians.

… Russia may soon become a raw material appendage to China should the present trend continue. ___
Analysis of China’s Future in Siberia

The “present trend” — China taking over Siberia by stealth invasion — cannot help but continue, given inexorable demographic trends. The Russian Far East will have a Chinese future. But how will the rest of Russia disintegrate? That is a more interesting and uncertain story. 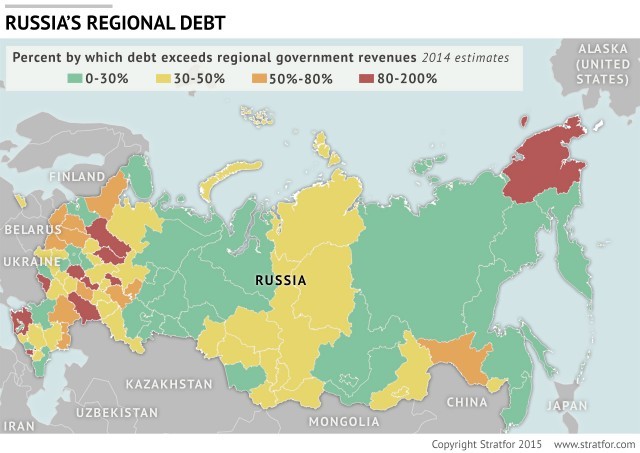 Russia has entered its second recession in six years. The effects of the country’s economic downturn have begun to trickle down from the federal level, spreading to Russia’s regions, cities and people. The federal government has long relied on the regional and municipal governments to carry their own burdens, and many are teetering on the verge of bankruptcy or collapse as Moscow siphons off a growing share of their funds. The Russian people are also beginning to feel the economic pressure more acutely as an increasing number of citizens fall under the poverty line and watch their savings dry up.

… All of Russia’s regions must meet a series of burdensome obligations to the Kremlin and social spending. Of the income each region generates, only 37 percent stays in the region itself; the rest goes to the federal government. The Kremlin returns a small portion of that in the form of subsidies, though no more than 20 percent of the original payment. Since 2011, the federal government has raised regional taxes by 12 percent.

… In response to their mounting financial burdens, Russia’s regional governments have already begun to slash their spending. According to the Higher School of Economics, 26 regions have cut funding for education, 21 have reduced spending on health care and 16 have slashed social security spending in the first half of 2015. For months, minor strikes have taken place across Moscow after 28 hospitals shut down and 7,000 medical employees were laid off. Teachers in Novosibirsk have protested repeatedly in 2015 in response to a 20 percent cut to their salaries. __ http://www.realclearworld.com/articles/2015/08/07/russian_regions_are_running_out_of_money_111361.html

Knowledgeable analysts predict the disintegration of Russia from the outside inward. That is a regional projection, given the huge size of the Russian landmass, and the shrinking size and quality of ethnic Russians who are somehow expected to hold the riches of Russia without credible outside help. 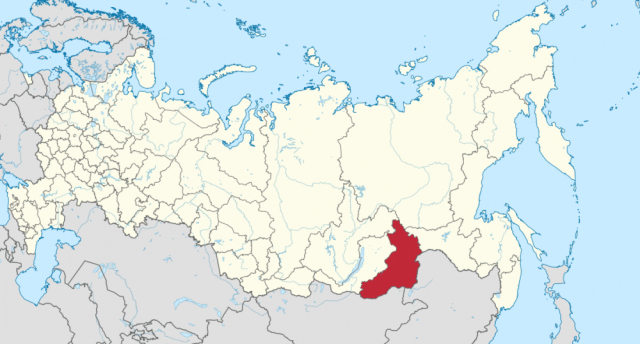 One Bite at a Time
http://euromaidanpress.com/2015/06/16/in-addition-to-massive-siberian-land-lease-beijing-wants-moscow-to-agree-to-massive-chinese-settlement/

Transbaikal officials are working on a deal with China that would allow Chinese firms to lease more than 300,000 hectares (1.2 thousand sq mi) of land in that Russian region, but a Beijing official says that the deal won’t go through unless Moscow agrees to a massive influx of Chinese workers…

As Mikhail Sergeyev, the head of the economics section of “Nezavisimaya gazeta,” observes, the Beijing writer “considers the transfer of land in the Transbaikal kray to be only the first swallow after which must follow others” and that such transfers are not “only” about an economic profit.

Beijing has already identified nine territories in Siberia and the Russian Far East which it would like to lease and then introduce a Chinese workforce, Sergeyev writes.

Beijing has strong economic leverage over Moscow. Each of these “small” (thousand square mile) land-grabs may be presented to Moscow as “offers that Putin cannot refuse.” Not if he wishes to retain his seat of corrupt power in the Kremlin.

14 Responses to Russia Haunted by Spectre of Disintegration