How to Eat Well During Ice Ages, Nuclear Winters, and Other Global Disasters

The World Just Ended: Whatever Are You Going to Cook for Dinner Tonight?

No more Chinese takeout. No pizza delivery. No Mexican drive thru. And forget about sit-down restaurants! The world as you know it is gone. If you want something to eat, you’re going to have to grow it, steal it, or kill it yourself.

Fortunately, a lucky convergence of indoor robotic farming, advanced LED ag-science, 3-D structural printing, and small-scale nuclear energy, are making it easier to survive underground — where ice age glaciation and years without summer can not stop you from growing large quantities of highly nutritious crops — up to 6 crops per year. How?

… cultivation that would require two and a half months with land cultivation can be reduced to less than one month of cultivation and harvesting… _ http://robohub.org/urban-vegetable-garden-system-with-led-lighting/

And robots can do all the work! 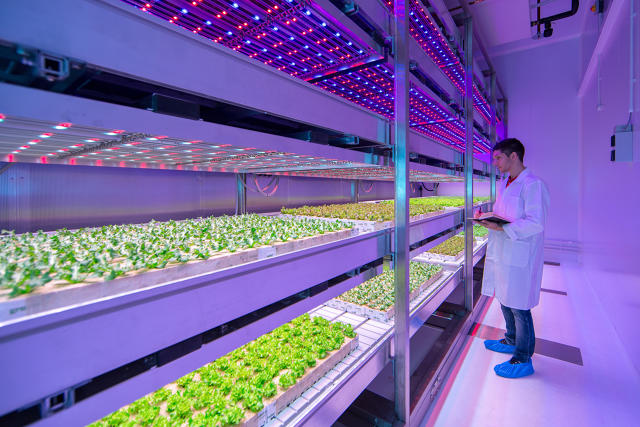 … LEDs offer a host of benefits over traditional, fluorescent growing lights. For one thing, they are far more efficient, which helps to keep electricity bills down. High efficiency means less heat, which makes air conditioning cheaper. Being cooler, the lights can be placed closer to the plants, so the crops can be planted more densely. The wavelengths of the light can be fine-tuned so that lettuce is crisper, or softer, says Robert Colangelo, the president of Green Sense Farms. Your correspondent tasted soft, sweet kale nibbled straight off the plant. It was delicious.

The crops grow faster, too. Philips reckons that using LED lights in this sort of controlled, indoor environment could cut growing cycles by up to half compared with traditional farming __ Roots of Indoor Farming

If you’re going to grow food indoors—especially in a windowless warehouse like the 30,000-square foot Green Sense Farms, one of Philips’ customers—you’ll need light. The LEDs provide a substitute for the sun, but they also go further; Philips designs “light recipes” that can make particular crops grow faster or produce more nutrients.

“We can tailor these recipes to the photosynthesis response of the plant,” says van der Feltz. “By being able to tweak the spectrum—the color the plants see—and put the lights exactly where they need it, we can dramatically increase yields and improve fruit density and quality.”

By changing the mix of lights, tomatoes can grow with more vitamin C. Basil gets tastier. The lights can be used as a supplement in more traditional greenhouses, but are even more effective in a closet-like vertical farm with no natural light. __ http://www.fastcoexist.com/3048492/in-this-huge-urban-farming-lab-led-recipes-grow-juicier-tomatoes-and-sweeter-basil

Using a 20 ft shipping container, this type of agriculture can provide as much crop output as a standard cultivation 1,000 square metre outdoor field.

Keystone Technology’s LED vegetable garden system is a cultivation system for indoor plant factories that uses LED lighting instead of sunlight. The most defining feature of the system on display at the company’s showroom in Yokohama is its 3-dimensional use of space. “This is a 5-tiered cultivation system. For smaller heads of lettuce, you can harvest about 1,500 heads in one month. If this were to be fit into a container of about 20 feet (6m), it would be equivalent to 970 sq. meters. Thus with 16 sq. meters, you could produce an amount that is on par with 970 sq. meters.”

… LED lighting has three different wavelengths of red, blue, and green. This system can control the illumination strength according to the stage of plant growth. So, cultivation that would require two and a half months with land cultivation can be reduced to less than one month of cultivation and harvesting. __ http://robohub.org/urban-vegetable-garden-system-with-led-lighting/

Notice that the entire production can be installed inside shipping containers — either buried underground, or stacked aboveground. But a more intriguing construction methods for these indoor — or underground — farms, is to have them constructed using 3D printing contruction methods. Using advanced 3D printing, such fully enclosed farms can be constructed with wiring, plant support structures, irrigation systems, and lighting systems all at once, in place. High rise printed construction could be used either aboveground or below ground. Robots do all the planting, monitoring, and harvesting.

These indoor robotic LED ag factories have been pioneered in Japan and Europe, but the end of the world as we know it (TEOTWAWKI) of the cold and sunless ice age or nuclear winter variety, are not likely to be particularly localised. This means that survivalists, preppers, and Dangerous Communities, should begin experimenting with indoor robotic LED farming ASAP.

And how will you power your romantic underground getaway and robotic farm? Given power density concerns, your best bet is some form of nuclear energy — fission, fusion, nuclear battery, or LENR etc. One example

As the technologies improve, would-be survivors are likely to upgrade their systems as necessary.

Hope for the best. Prepare for the worst.