Europe, and much of the rest of the advanced world, is undergoing a permanent transformation. After surviving the ambitions of Hitler, Stalin, and the Kaiser, shrinking populations of Europe are voluntarily surrendering — unconditionally — to more rapidly proliferating populations from tribal areas of the third world. Why?

On its own, Europe was becoming an unsustainable and overly costly retirement home. Who would pay for the upkeep of the rapidly expanding cohorts of the European aged?

The nature and scale of the global demographic future are becoming ominously clear. As Goldman points out, on present trends, “in the second half of this century most of the great powers of the past—Germany, Spain, Italy, Russia, and Japan, among others—will cease to function. A century later they will have ceased to exist.” In Western Europe, by 2100 the working-age population will have fallen by about 40 per cent, and in Eastern Europe, Russia, and East Asia by some 66 per cent. The least fertile European nations face a population decline of 40 to 60 per cent, with Germany’s population projected to decline by 98 per cent over the next 200 years if present trends continue.

Today’s European woman can simply not be bothered with child birth and child raising. European women have grown beyond such mundane things, and expect to be taken care of by someone else’s children as they age.

Demographic Point of No Return 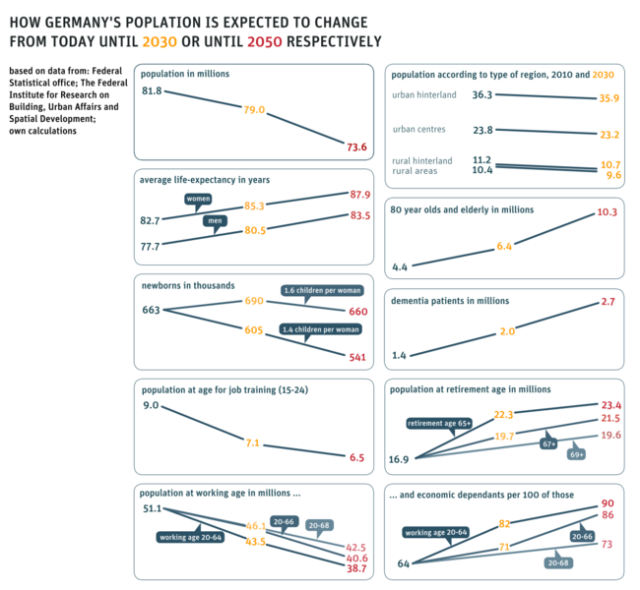 Germany has already passed the demographic “point of no return”. Even if the annual migration surplus were to rise to 200,000 people by 2020 and the average fertility rate to 1.6 children per woman by 2025, the population would still continue to age and decline. Thus the number of people receiving transfers from the funds for pensions, health and nursing care will steadily increase in the decades to come. Simultaneously, the number of people generating wealth will decline considerably. Raising the retirement age to 67 or 69 can only attenuate this trend but not stop it.

… As German society ages sooner than elsewhere, it will lose its competitiveness to younger, emerging countries. That is why, as a pioneer of change, Germany should duly develop concepts for social well-being in times of demographic post-growth. If it succeeds in doing this, its demographic problems would soon become relative, for sooner or later most industrial countries and the first emerging countries too will be hit by the same changes.
__ http://www.berlin-institut.org/en/publications/discussion-papers/demographic-strategy-20.html 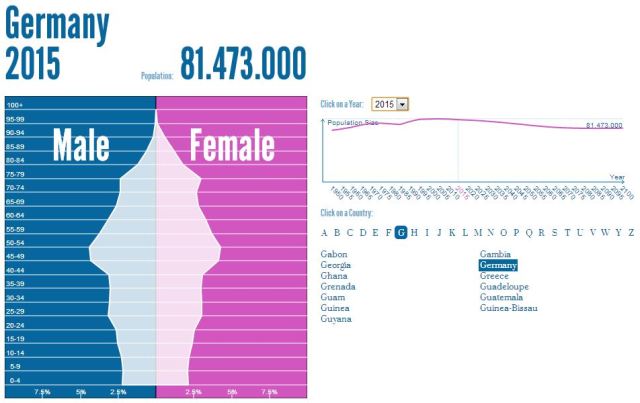 The population pyramid provides a graphic representation of expected population percentage for specific age cohorts of males vs. females.

An inverted pyramid, such as we see for many nations of Europe and East Asia, implies an ageing population that is due to shrink. It also suggests that such a country will not long be viable as a welfare state of the European variety. 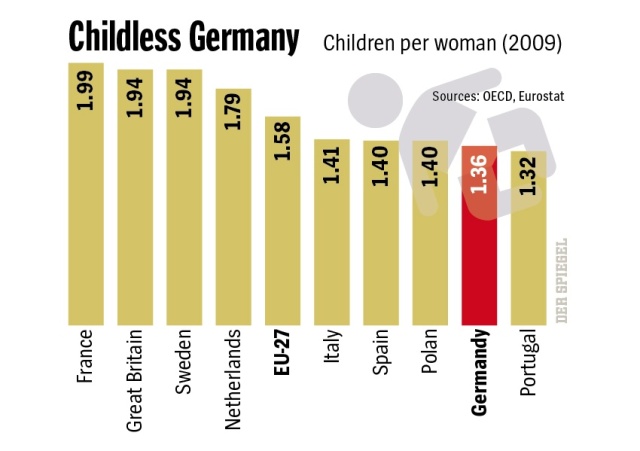 Perhaps this sad reality is driving Angela Merkel’s insane policy of promiscuous immigration from the more violent and less intelligent populations of the tribal third world. But without the surge of violent cultural clashes that will come with low-quality immigration, there is a chance that Germans will eventually wake up: Either German women will discover a way that they can tolerate having children by German men — or someone will invent a workable and affordable artificial womb.

Germany has opened the floodgates to immigrants from violent and low-IQ tribal areas. This flood of anger and discontent is likely to flow directly into German cities, where generous welfare assistance can be most easily found.

Berlin/Mainz: More than a million refugees will come to Germany this year, Chancellor Angela Merkel’s deputy said on Sunday, as a poll showed almost half of Germans believe she is handling the influx of asylum seekers badly.

German authorities are struggling to cope with the roughly 10,000 asylum seekers arriving every day. The German government still officially expects 800,000 asylum applications in 2015, while media say up to 1.5 million people could come.

“Germany will receive more than a million refugees this year,” Vice Chancellor Sigmar Gabriel told a Social Democratic (SPD) party event in Mainz. It was important, he said, to create the right conditions to ensure Germany could meet the challenge.

Reports of violent clashes at refugee shelters and overburdened local communities are deepening public scepticism towards the influx and have weighed on support for Merkel’s conservatives, and opened rifts in their ranks.
__ http://gulfnews.com/news/europe/germany/merkel-s-deputy-expects-germany-to-get-over-a-million-refugees-in-2015-1.1599104

As has been discovered in the UK, immigrants transform a nation’s cities, making them more violent and unrepresentative of the nation’s historical culture.

Thanks to generous welfare payments, as well as higher wages for those immigrants who actually work and collect wages, tribal third world immigrants feel empowered to have more children than do the indigenous people who must pay the taxes to fund generous welfare policies. Low-IQ, high violence immigrants can thus better afford to have many more children than indigenous Germans, once they have established themselves in their new country.

Suddenly, one begins to see population pyramids beginning to widen at their bases, thanks to children of third world immigrants. Birthing wards, schools, pediatrics wards, and welfare rolls begin to fill and expand with these newcomers.

Welfare costs were already rising, and tax income was already falling — due to the ageing of the society — even before the onslaught of these costly immigrants. Taking account of additional costs to society from low IQ, low-achieving, high violence immigrants, many government budgets will reach the breaking point far sooner with the immigrants, than without them.

This destructive transformation occurs over time, from the bottom up, as uneducable and unassimilable youth cohorts grow older.

Europe’s newcomers could never have created the civilisations of Europe, and they can never maintain them. As their numbers grow relative to Europeans, the decline and collapse of European institutions and societies will accelerate. That is, after all, the natural end result of a feminist social welfare society.

The US is likely to grow in population, thanks to immigrants from Asia and Latin America — and thanks to religious denominations made up of mostly European Americans which still promote large family sizes.

Many other nations will find themselves somewhere between the rapid decliners: Japan – Spain – Italy etc. and the modern nations likely to sustain or increase population numbers, such as the US.

Russia’s population pyramid tells us that its numbers will decline rapidly over the next few decades, due to a drop-off-the-cliff of Russian women of child-bearing age. A recent slowing of Russia’s population decline was caused by a combination of immigration (of Russians from the former USSR and of Muslims from various nations) and a temporary birth uptick from a mini baby-boom a few decades back. A temporary decrease in mortality rates is already being reversed by current abysmal economic conditions across most of Russia.

As the brighter populations of the world fade away, the less intelligent — but more rapidly breeding — populations will fuel population growth for the next century or two — at least on the planet’s continental surfaces.

Obama and Putin seem to believe that allowing the governments of such populations to control and proliferate nuclear weapons, will work out well.

http://bruegel.org/2015/10/the-systemic-roots-of-russias-recession/ …. Recession in Russia feeds into the accelerating demographic decline of all nations that are too closely tied to the dying bear.