Tribulations of the Petro-States

If oil stays around $50 a barrel, most countries in the [Middle East] region will run out of cash in five years or less, warned a dire report from the International Monetary Fund this week. That includes OPEC leader Saudi Arabia as well as Oman and Bahrain. __
CNN Money 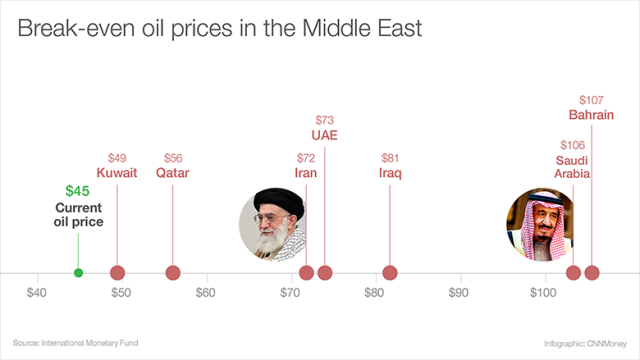 Saudi Arabia, the world’s largest oil producer, needs to sell oil at around $106 to balance its budget, according to IMF estimates. The kingdom barely has enough fiscal buffers to survive five years of $50 oil, the IMF said. __ http://money.cnn.com/2015/10/25/investing/oil-prices-saudi-arabia-cash-opec-middle-east/index.html?

Russia’s fiscal breakeven oil price is between $100 and $150, depending upon how quickly the Kremlin moves to slash the state budget for next year. Russia’s reserve funds are scheduled to drop near empty in 2016, if Putin does not scale down his grand ambitions.

Russian Finance Minister Anton Siluanov prompted more concerns over the health of the Russian economy Tuesday when he said there was a danger that the country’s vast Reserve Fund could be entirely exhausted in 2016 if oil prices stay at their current level. __ Running on Empty 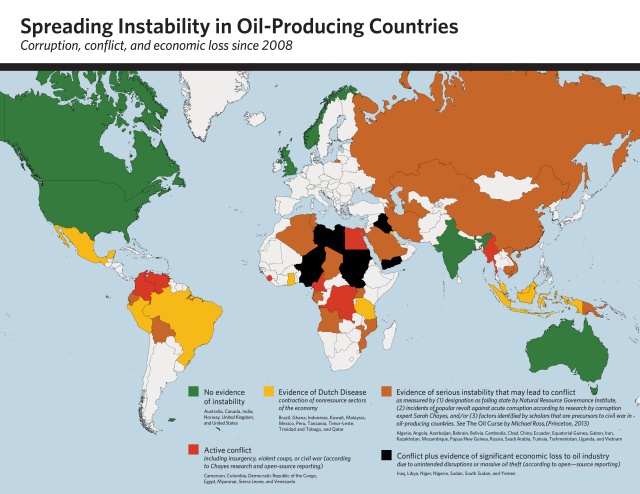 Oil Purgatory: Where the Pain and Instability Are
http://carnegieendowment.org/2015/09/30/oil-curse-remedial-role-for-oil-industry/iibp

Russia faces the deepest crisis of its existence, according to its former deputy energy ministry. A Russian default on debt in 2016 is not out of the question, things are looking so bleak at this point.

Many readers cannot comprehend how Russia could be in danger of default, when it began this crisis with $500 billion in reserves. Here is part of the answer:

The country’s economic and political problems can be traced in large part to acute corruption, which analysts estimated in 2013 costs the country about $300 billion a year, a full 16 percent of its GDP.40 Such corruption causes massive losses in the oil and gas sector. For example, in 2011, Gazprom alone lost $40 billion to corruption and inefficiency, Anders Åslund of the Peterson Institute for International Economics estimated.41 These losses likely translate into increasing costs for Western oil companies operating in Russia (and also for China, which is increasingly investing in the Russian oil sector). __
http://carnegieendowment.org/2015/09/30/oil-curse-remedial-role-for-oil-industry/iibp

When $300 billion is being skimmed off the top every year — and when Putin splurges on an expensively corrupt Olympics, an invasion of Crimea and east Ukraine, troublemaking in Moldova and Georgia, Kabuki Bombing Theatre in Syria, and incredibly corrupt and expensive military upgrades and increased spending on propaganda and internal/external espionage and security — it all adds up to a very leaky sieve holding the reserves. 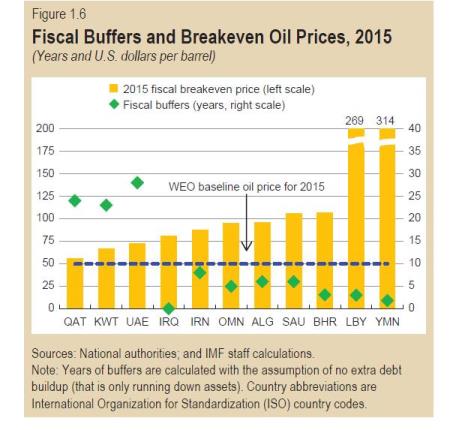 On October 14, non- OPEC member Mexico confirmed its participation in a technical meeting organized by the cartel on October 21 in Vienna to which seven other non-OPEC members were also invited.

“We are going with a technical delegation to receive information and exchange it with other producers. But Mexico will not take part in any reduction in production volume,” said Mexico’s Energy Minister Pedro Joaquin Coldwell. The meeting was held last Wednesday and was attended by representatives of five countries: Russia, Brazil, Kazakhstan, Colombia and Mexico. The main agenda of the meeting was to exchange different market views and create a common strategy in response to the current market conditions and low oil prices. __ Oilprice.com

The people of Venezuela and Iran are suffering the most of the petro-states on a practical level, but the people of Russia are re-learning the meaning of the word “hardship.” Even Russia’s elites are growing uneasy over Putin’s spending priorities in a time of dire economic troubles.

Inside the ruling elite, longstanding competition over power and property has intensified as the resource base has shrunk. The “economic storm” has caused “bewilderment” and nervousness at the top, according to one expert, since the elites did not anticipate the West’s determination to impose effective sanctions and underestimated the effects of those sanctions. Some power players are reportedly critical of Putin in private but cannot challenge his authority, since he could easily crush them. Longstanding tensions among the leaders who seek to replace Dmitry Medvedev as prime minister, and thereby formally become Putin’s heir apparent, lie just below the surface. __ http://imrussia.org/en/analysis/politics/2454-russia%E2%80%99s-elites-battle-over-a-shrinking-economic-pie

Putin is spending scarce reserves and pension funds on a military buildup and a Kabuki bombing theatre in Syria. The Russian people are too preoccupied by Russian television propaganda to notice how empty their food stocks are growing.

Other Russians are seeking the help of psychics in the search for a way out of the hellish future Putin is generating.

Psychotherapist Dmitry Olshansky links the growing popularity of psychics to Russia’s economic crisis – since last December the value of the rouble has halved.

“People feel unsure. And they want to rely on somebody. They need a ‘parent’ figure, a shoulder, or somebody who would tell them how to live and what to do,” he says.

“Moreover, Russians don’t have reliable sources of information. What people see on television, what they read in newspapers does not correspond to reality. And they know this.”

This, he suggests, increases their need for someone who appears to have special powers to discern the truth.

Those who are unable to escape from the increasing hardship inside Venezuela, Iran, and Russia, are seeking comfort and reassurance anywhere they can.

For the time being, the full force of Russia’s economic problems has yet to hit consumers. What problems consumers have faced are blamed not on Putin, but on the West — a function of how state-run television and other media portray the crisis, said Ilya Zaslavsky, a former Russian energy sector consultant now with the British think tank Chatham House. __ http://www.rferl.org/content/russia-ex-officials-say-stagnation-decline-looming/27328059.html

The same is true for the Persian Gulf states, and the corrupt petrostates of South America and Africa. The painful consequences of long-term low oil prices have yet to fully impact the many nations suffering the oil curse. But the pain is coming.

Growing economic difficulties and lack of job opportunities and professional development entice many young people to emigrate, particularly to Europe and to the United States. It is estimated that between 2000 and 2010 more than 1.25 million Russians emigrated, an even greater number than those who left after the collapse of the Soviet Union .

During the past two decades, an aging demographic turn and its effect on Russian society has been the focus of debate. Russia is experiencing a rapidly aging population with steadily declining birth rates. However, while people living in most industrialized countries have increased life expectancy, Russian inhabitants have a relatively low health status.

These factors, in addition to restrictive immigration policies and low fertility rates (below two children per woman, which is considered the population replacement rate), have led Russia to a constant process of depopulation. Between 1993 and 2015 Russian population decreased from approximately 149 to 144 million people. If current trends continue, there will be between 100-107 million Russians in 2050.

According to the World Health Organization, heart disease, aggravated by alcohol and tobacco, is responsible for over 1.2 million deaths each year. Estimates of annual fatalities derived from smoking-related diseases range from 350,000 to 400,000. In the U.S., with more than twice the population of Russia, cigarette smoking causes more than 480,000 deaths annually.

HIV/AIDS is still a serious problem, particularly because 80 percent of those infected with HIV are under 30, and the epidemic is closely associated with high levels of intravenous drug use. More than two million men are considered to be HIV positive, and the epidemic doesn’t show any signs of abating.

Tuberculosis still affects many Russians. Even more seriously, the country is experiencing a high burden of multidrug-resistant tuberculosis (MDR), a variety of the disease impervious to isoniazid and rifampicin, the two most effective first-line anti-TB drugs. Treatment of MDR TB requires treatment with drugs that are less potent and more toxic that those used to treat drug-susceptible TB.

The prevalence of diabetes is rapidly increasing in Russia, where four million people have been diagnosed with the disease and almost six million people are unaware they have it. The annual cost of caring for diabetic patients in Russia is over $12.5 billion.

In addition, a still inadequate health care system, lacking in resources and with attention focused on the country’s main cities, affects mental health care. In 2012, there were 277 outpatients clinics devoted to the primary care of people with mental disorders compared to 318 such clinics in 2005. At the same time, there is a reduction in the number and quality of medications for patients with psychiatric illnesses.

The economic outlook is negatively affected by widespread corruption. Independent experts name law enforcement agencies as the most corrupt institutions, followed by health care, education, housing and communal services. While some experts maintain that corruption consumes as much as 25 percent of Russia GDP, the World Bank puts this figure at 48 percent. Transparency International ranks Russia 136th in its Corruption Perception Index.

The economic downturn affects all sectors, from big corporations to small and medium enterprises, many of which have gone bankrupt. A considerable number of small businesses that do well in prosperous times such as boutiques, small restaurants and several kinds of service stores have closed down.

Some recent cuts in health care and education will not solve the problems affecting the Russian economy. They are at most palliative measures.

Although the problems highlighted are not the only ones affecting Russia, they need to be effectively addressed if the country aims to develop at the rate that its considerable resources allow.

Putin’s Strange World and stranger yet.

And then there is Russia’s “womb drain” and the need to liberate the girls and women of Russia while there is still time.

Other petro-states have similarly severe underlying problems, but most of them are not threatening the world with global thermonuclear war.

Due to poor leadership, most petro-states are unlikely to apply the much-needed reforms to their economies and governmental structures. Most of them have always been corrupt and can conceive of no other mode of operating.

Keep all of these things in mind when considering your plans for the future.

4 Responses to Tribulations of the Petro-States