No matter what you want to escape — from a zombie apocalypse to a comet strike to a skankstream cathedral — you will wish to do so with flair. Below is a collection of escape vehicles, meant for a variety of escape occasions. Consider your needs, your budget, and the capacity of your heart to withstand big thrills.

The hover-bike above is being tested as a “drone” or unmanned vehicle. But it is meant to be flown by humans eventually. Expect the military — and gung-ho survivalists — to show strong interest.

Built by Malloy Aeronautics in the UK, the hover bike appears to have solved the secret for achieving both stability and compactness in a quadcopter hovercraft. It does so by overlapping the left and right rotors — which appears to make the vehicle both narrower and much more stable, than previous two-rotor attempts. 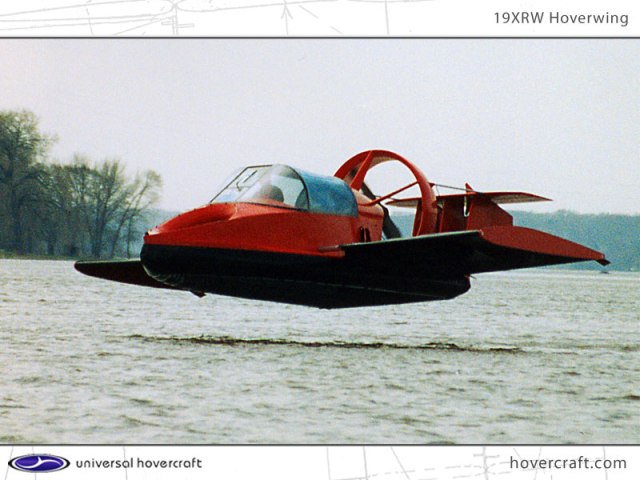 The ground effect hovercraft above — the Hoverwing — combines a conventional hovercraft with short stubby wings, allowing the craft to achieve low-level flight.

Flying in ground-effect enables you to clear obstacles and fly over rough water at speeds in excess of 75 mph. Cruise altitude is 1 meter (3 feet) to 2 meters (6 feet) and the craft can jump up to 7 meters (20+ feet) to clear large obstacles. __ hovercraft.com/content/index.php 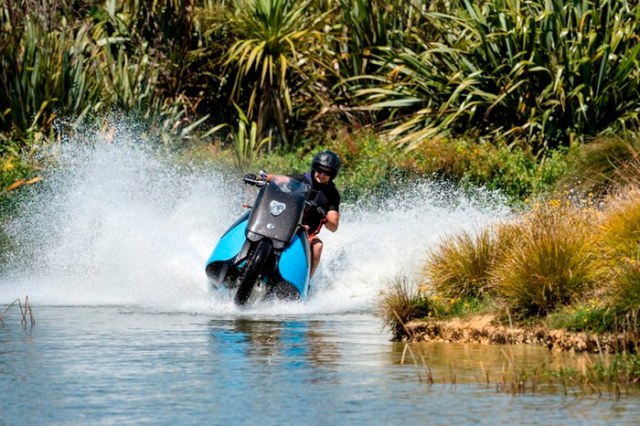 Like the Triski, the Biski pulls its wheels up and out of the way, and it’s driven and steered by a jet on either side of the wheel. It’s worth noting that when you switch to water mode, it appears the front wheel is locked in place, dead straight. The transition takes around 5 seconds, and barely slows your progress as you ride off the road, into the water and go. __
http://www.gizmag.com/gibbs-sports-amphibians-concept-vehicles/39912/ 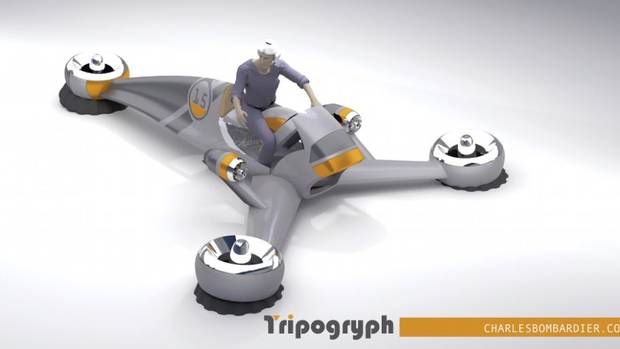 This “tricycle” hovercraft includes forward-swept “wings” that allow ground effect, low-level flight. It uses three hoverskirts instead of one — one skirt for each blower.

The Tripogryph is configured similarly to a trike (a three-wheeled motorcycle like the Can-Am Spyder). The rider sits on top of the vehicle, the engine is located under the seat, and it’s controlled by handlebars. However, the comparison stops there—the Tripogryph is supported by three blowers instead of wheels.

These blowers push air downward into a rubber skirt (airskirt), which increases air pressure and creates lift. The pressure difference is enough to make the vehicle float and travel over land, mud, ice, water, and other surfaces. The rubber on the airskirt also protects the vehicle from damage if it runs over small rocks or debris.
__ More at: http://www.theglobeandmail.com/globe-drive/culture/technology/its-like-a-three-wheeled-motorcycle-but-would-be-able-to-fly/article25225032/# 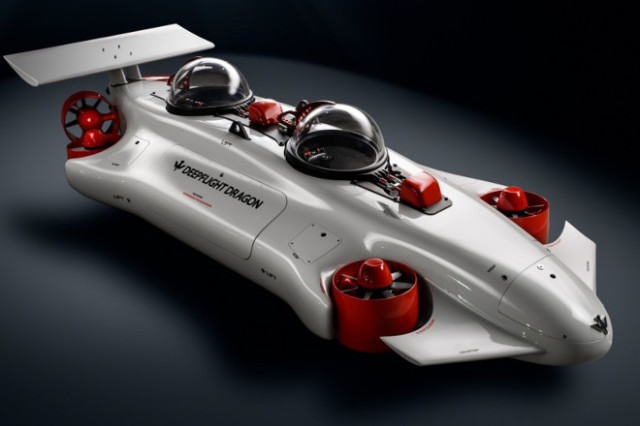 The hybrid hovercraft-submarine concept above requires more work to become bifunctional. But it appears to have some of the key ingredients that it will need.

Personal submarines are the ultimate plaything of the mega-rich and now one company has taken it to a new level. DeepFlight with an experienced team of designers and engineers have reworked the submersible from the ground up, applying the principles and dynamics of flight to the aquatic vessel.

Dragon, is the firm’s second vehicle, and brings a new dimension to underwater travel with the additions of “hover and flight”. Dubbed the easiest submarine to pilot, it could well be the safest too – it has fixed positive buoyancy, i.e. it’ll always float back to the surface, no drop weights or variable ballast system.

At just 1800kg and 5 meters in length, Dragon will fit onto more yachts than any other sub on the market, but it will set you back a cool $1.5m; in case you’ve just got it lying around.

The Deepflight submarine above is highly hydrodynamic, allowing for exciting underwater manoeuvres.

Forget everything you know about submarines: the Super Falcon Mark II leverages the principles and dynamics of flight by incorporating a patented inverted winged design. It is the underwater equivalent of an airplane. Diving the Super Falcon Mark II is a radically different experience from a conventional submarine, connecting you to the blue space around you like never before.

Unlike traditional submarines with cockpits as complicated as a 747, the Super Falcon employs intuitive controls, fly-by-wire technology, and a simple layout, enabling you to dive your Super Falcon with minimal training. If Apple designed a submarine cockpit, this would be the one.
__ http://www.deepflight.com/super-falcon-mark-ii/#

You can see a more conventional hovercraft design above, meant for personal use. Such craft are capable of traveling over water, land, ice, snow, mud, sand, and most any reasonably flat surface. The highly streamlined version above is meant as a do-it-yourself project.

The gyro-rotocraft above is FAA type certified, and its builder intends to put it into production as soon as possible. Such “gyrocraft” utilise the rotary wing concept. Its wings rotate above the cockpit, providing lift using the same aerodynamics that fixed wings do, making it different from a helicopter. It must be propelled in a forward direction to achieve such lift, like ordinary airplanes.

A no roll takeoff is more of a normal event and is achieved by pre-rotating the rotor. This stores energy in the weight of the rotors, much like a flywheel on a car. The inertia is then converted to lift after releasing the clutch and pulling the collective, allowing for a near vertical departure, without concern for torque.

Rotor F/X offers a complete line of Mosquito helicopters. From “open air” copters that require no license at all, to more sophisticated helos with more power and range, that require either helicopter or fixed-wing licenses. More about the Mosquito XE:

Mosquito XE – HELICOPTER OR FIXED WING PILOTS LICENSE REQUIRED TO FLY THIS HELICOPTER IN USA** If you have a rotorcraft rating or are planning on getting your license the XE is the place to start. Identical to the XEL but without the floats and with an unrestricted fuel capacity the XE will really take you places. Fly for over 2 hours, or even 4 with optional extended tanks, at a comfortable cruise of 75 mph and a very economical fuel burn of only 4.5 gallons per hour. This helicopter requires FAA registration and a pilot rating with its enhanced capabilities.

Personal jets such as the SubSonex above, require a runway. Takeoff distance for the SubSonex is 1200 feet and landing roll is 2500 feet. Cruising speed is 240 mph, range is 480 statute miles. More

As long as you have good places to take off and land, you will be able to achieve greater range and higher elevations than the other escape craft pictured higher on the page. 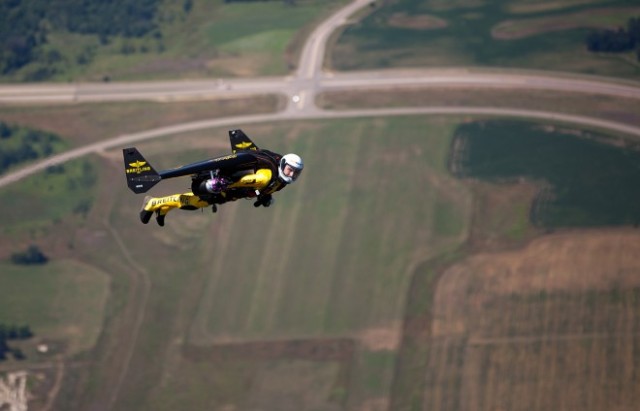 To fly the Rossy Wing Pack Jet, one must start from a high place (6500 ft or so) — such as an airplane, helicopter, or very high balloon, cliff, or tower. The Jet Pack features 4 jet engines of 50 lbs thrust each.

For a few minutes, one can even “fly with the big boys.” 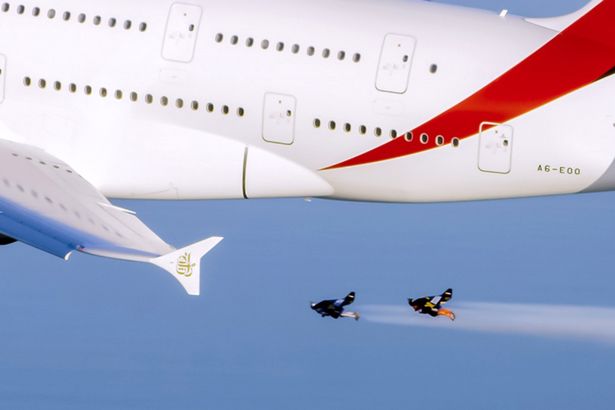 If you need to escape to another continent or hemisphere, you may wish to take the Skreemr scramjet mach 10 aircraft, in development.

The Skreemr is an aircraft concept that would be launched at very high speed with the help of a magnetic railgun launching system. Rockets would increase the aircraft speed enough to ignite its main scramjet engine, making it possible to reach speeds over Mach 10.

Scramjet engine designs are being developed right now by the U.S. and China. It will take years to see them on factory-built military drones, but maybe in the distant future they could be used to fly passengers across oceans at very high speed.

The Skreemr would need to be launched from an electric launch system. This device would make it possible to accelerate the aircraft to high speed. This system would need to be long enough to achieve supersonic speed without taxing the passengers with too much g-force.

The Skreemr would then ignite liquid-oxygen / kerosene rockets to rise up in altitude and reach a speed of Mach 4 (or maintain it after being released from the railgun). The plane would then ignite its scramjet engine and burn hydrogen and compressed oxygen to continue its acceleration.
___ http://www.theglobeandmail.com/globe-drive/culture/technology/passenger-plane-concept-could-travel-five-times-the-speed-of-the-concorde/article26950644/

Needless to say, you will need to bring a large pocketbook.

If you can wait 100 years or so, Icarus Interstellar is running a project that hopes to achieve interstellar flight by the year 2100.

This entry was posted in Survival Prepping, TEOTWAWKI, Transportation and tagged survival. Bookmark the permalink.
%d bloggers like this: