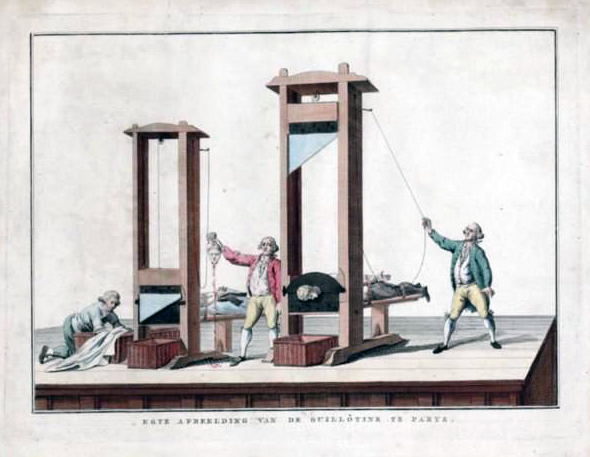 The modern “climate apocalypse” movement is bringing a cult of fanaticism back to Paris. And like all cults, it has its heretics that it would like to burn, behead, and mutilate.

One of the top climate heretics, a scientist who opposes the cult of climate apocalypse, is Judith Curry of Georgia Tech University.

London: It is safe to predict that when 20,000 world leaders, officials, green activists and hangers-on convene in Paris next week for the 21st UN climate conference, one person you will not see much quoted is Professor Judith Curry. This is a pity. Her record of peer-reviewed publication in the best climate-science journals is second to none, and in the US she has become a public intellectual. But on this side of the Atlantic, apparently, she is too “challenging”. What is troubling about her pariah status is that her trenchant critique of the supposed consensus on global warming is not derived from ideology, let alone funding by fossil-fuel firms, but from solid data and analysis.
__ Heretical Confessions

It seems that Professor Curry is too much the properly sceptical scientist, and not enough the “credulous true believer,” to suit the cultists of climate apocalypse. Perhaps she is too intelligent, with too much integrity, to fit in with the cultists?

Another scientist who is a sceptic of the apocalyptic bandwagon of the pseudo-scientific cultists, is Dr. Roy Spencer — climatologist and expert on climate satellite data interpretation. 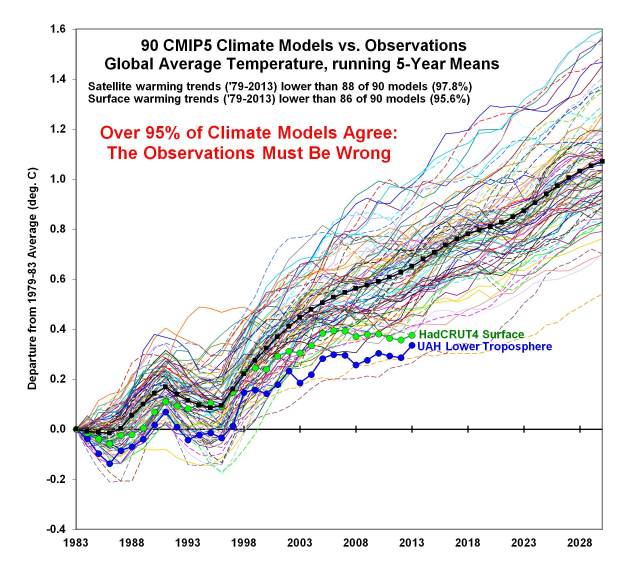 Dr. Spencer’s graphical representation of the ongoing divergence of actual temperatures vs. the climate cult predictions, helps to reveal why “the map is not the territory, the model is not the climate.”

The resulting picture that emerges is of an IN-sensitive climate system, dominated by negative feedback. And it appears that the reason why most climate models are instead VERY sensitive is due to the illusion of a sensitive climate system that can arise when one is not careful about the physical interpretation of how clouds operate in terms of cause and effect (forcing and feedback).

Indeed, climate researchers seldom (if ever) dig into the archives of satellite data and ask the question, “What are the satellite data telling us about the real climate system?” Instead, most climate research money now is funneled into building expensive climate models which are then expected to provide a basis for formulating public policy. Given the immense effort that has been invested, one would think that those models would be more rigorously tested.

There is nothing inherently wrong with a model-centric approach to climate research…as long as the modeler continues to use the observations to guide the model development over time. Unfortunately, as Richard Lindzen at MIT has pointed out, the fact that modelers use the term “model validation” rather than “model testing” belies their inherent preference of theory over observations. The allure of models is strong: they are clean, with well-defined equations and mathematical precision. Observations of the real climate system are dirty, incomplete, and prone to measurement error.

Yet another sceptical scientist, MIT’s Richard Lindzen, probably has more intelligence in his small toenail than the cultists have in all of their brains put together.

Research in recent years has encouraged those of us who question the popular alarm over allegedly man-made global warming. Actually, the move from “global warming” to “climate change” indicated the silliness of this issue. The climate has been changing since the Earth was formed. This normal course is now taken to be evidence of doom.

Individuals and organizations highly vested in disaster scenarios have relentlessly attacked scientists and others who do not share their beliefs. The attacks have taken a threatening turn.
__ http://www.cato.org/publications/commentary/political-assault-climate-skeptics

Climate models have been failing this basic test for many years, and yet the climate apocalypse cult is quite willing to bet all the advanced economies of the world on the unlikely gamble that the models’ predictions of climate apocalypse should be believed and acted upon.

A recent mathematical discovery has revealed that the climate cult is overestimating future warming by roughly a factor of 10, or an order of magnitude. How could the climate cultists and inquisitioners have gotten their predictions so wrong? Poor modeling practises… More

Another prestigious and world-renowned heretic is physicist Freeman Dyson.

My first heresy says that all the fuss about global warming is grossly exaggerated. Here I am opposing the holy brotherhood of climate model experts and the crowd of deluded citizens who believe the numbers predicted by the computer models. Of course, they say, I have no degree in meteorology and I am therefore not qualified to speak. But I have studied the climate models and I know what they can do. The models solve the equations of fluid dynamics, and they do a very good job of describing the fluid motions of the atmosphere and the oceans. They do a very poor job of describing the clouds, the dust, the chemistry and the biology of fields and farms and forests. They do not begin to describe the real world that we live in. The real world is muddy and messy and full of things that we do not yet understand. It is much easier for a scientist to sit in an air-conditioned building and run computer models, than to put on winter clothes and measure what is really happening outside in the swamps and the clouds. That is why the climate model experts end up believing their own models.

As a scientist I do not have much faith in predictions. Science is organized unpredictability. The best scientists like to arrange things in an experiment to be as unpredictable as possible, and then they do the experiment to see what will happen. You might say that if something is predictable then it is not science. When I make predictions, I am not speaking as a scientist. I am speaking as a story-teller, and my predictions are science-fiction rather than science. The predictions of science-fiction writers are notoriously inaccurate. Their purpose is to imagine what might happen rather than to describe what will happen. I will be telling stories that challenge the prevailing dogmas of today. The prevailing dogmas may be right, but they still need to be challenged. I am proud to be a heretic. The world always needs heretics to challenge the prevailing orthodoxies. Since I am heretic, I am accustomed to being in the minority. If I could persuade everyone to agree with me, I would not be a heretic.
___ http://edge.org/conversation/heretical-thoughts-about-science-and-society

You may see a basic trend emerging: These heretics of the climate apocalypse cult want to treat the climate like any other object of scientific study: Form a null hypothesis, collect data in an attempt to refute the hypothesis, then carefully – honestly – and openly evaluate the data to determine whether the hypothesis can be refuted. Continue, and repeat, ad infinitum, and attempt to replicate the findings of others who still practise old-fashioned science, with an ever-sceptical eye.

Don’t Be a Cultist!

These are days when intelligent and independent minds must study issues and make decisions for themselves — rather than leaving potentially devastating decisions up to politicians, ideologues, bureaucrats, cultists, and corrupt policymakers of every stripe.

Below you will see the beginnings of the swelling currents of independent researchers and citizen science:

How the term “climate change” became a bait and switch, typical of corrupt politicians and ideologues, by independent researcher and author Bob Tisdale.

Citizen scientist Steve McIntyre is, in fact, one of the persons instrumental in refuting some particularly deceptive modeling techniques by cultist Michael Mann. McIntyre continues performing the thankless task of holding the climate cult accountable for its deceptive practises.

We should all learn to be Dangerous to the corrupt opportunists, cultists, and blind fanatics now gathering in Paris.

Destroying the futures of your children and grandchildren in exchange for short-term political and financial gain, may seem a fair trade to these cultists and opportunistic fellow travelers. But you have the ability to think and act for yourself.

There will be a reckoning. Best make it sooner, rather than later.

More — A few of the many things improperly accounted for in climate models:

Cultists have put the cart before the horse. They pre-decided their conclusion before they looked at all the pertinent data. They chose not to test their ideas, theories, models, and hypotheses — and chose instead to go on a cult crusade for climate apocalypse. In Paris over the next several days, you can go to see the groupthink mindlessness of cult-bubble chic.

Provisions must be made for such voluntary Idiocracy, as well as for the coming dysgenic Idiocracy of the immigration invasion of uneducated, unskilled, hostile newcomers.

Hope for the best. Prepare for the worst. It is never too early or too late to have a Dangerous Childhood.

Make no mistake: Climate cultists are terrorists of the most destructive kind.

Greenpeace founder Robert Johnson suggests we are moving from legitimate rational concern about changing global conditions and toward a state of “climate hysteria.” This, he suggests, is openly promoted by a scientific and political establishment fed, emotionally and sometimes economically, by selling ever more extreme scenarios. Climate scientists, notes the left-leaning magazine Oz, are even embracing emotion and salesmanship as a part of their job description as researchers, quite a departure from past standard professional behavior.

Combining this mindless hysteria with long-range global policy-making by advanced nations, is a recipe for massive economic and cultural disaster.

Destroying the global economy on an unworkable whim

Keep an eye on what happens in Paris. She is not the only part of the world being savagely raped by the apocalypse cults. The same pious sadism wielded against Paris by the Islamist Doomsday Cult and the Climate Apocalypse Cult can also be used on your own cities and nations. Examine these things closely so that you will know the enemy when he comes to overturn your future.

An 18,000 Year Look at Climate and Human Civilisation
(via The Arts Mechanical)

This entry was posted in Climate, Groupthink, Ideology, Science and tagged Climate Cult. Bookmark the permalink.

2 Responses to “Climate Heretics” vs. the Climate Apocalypse Cult