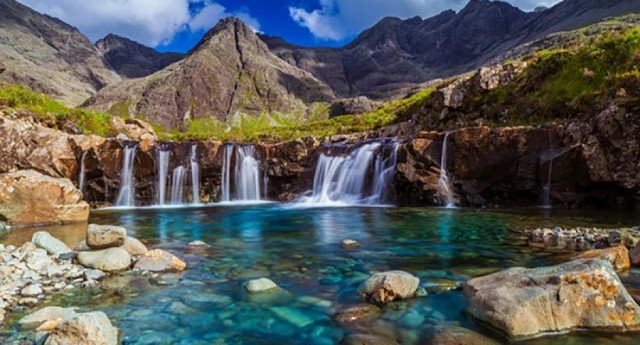 Everyone loves pristine places: Clean air, clear water, blue skies. No one likes pollution such as one sees in Beijing, Moscow, or Mexico City. Everyone wants to see a clean Earth. So how did the “clean Earth movement” get so viciously hijacked by the Climate Apocalypse Cult™ ?

And why do otherwise “intelligent” people go along with it?

The world’s temperature fluctuates, but it has certainly been warmer in a number of epochs in world history than it is now. “Global warming” is an expression that once empurpled the air and debouched from the lips of all of “mainstream science’s spokespeople” and their crowded echo chamber, but it silently metamorphosed into “climate change.” This is a much less definitive expression, and is much more of an intellectual retreat than that of a denier to a doubter.

Politicians and celebrities have been hyping climate apocalypse — and neglecting the environment — at an accelerating pace, in an increasingly strident and hysterical tone.

This “convenient neglect of the environment” in favour of climate hysteria has been noted for a number of years now. The above quote from Conrad Black is from December of 2015. The excerpt below from Richard Black is from 2009:

By singing the climate tune so loudly, have environmental groups unwittingly helped to create a situation where climate change is all that politicians and the public hear?

Has the media contributed? A couple of years ago I added up the number of articles we had written on the BBC News website within the preceding nine months about various issues.

The scores were four for deforestation, four for desertification, 17 for biodiversity – and on climate change I stopped counting when I reached 1,000.

The two excerpts might have been written by the same person on the same day, but they were not. It is perfectly appropriate to refer to the modern climate movement as a Climate Apocalypse Cult — since there is very little of science to it, and a great deal of religion. 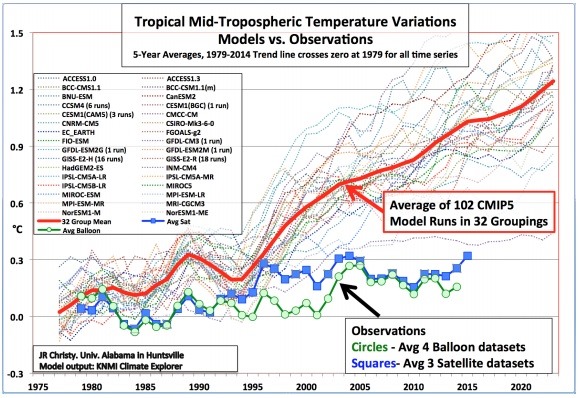 It is on the basis of forecasts that the political leaders and government officials gathered in Paris are discussing agreements that would impose extraordinarily disruptive and expensive policies on the nations of the world. Those forecasts—called scenarios and projections by the U.N. Intergovernmental Panel on Climate Change (IPCC)—are the product of complex computer models involving multitudes of interacting assumptions.

The Climate Apocalypse Cult appears poised to create the largest economic and geopolitical train wreck in human history — all under the false flag of “protecting the environment.” But it is not “the environment” that is being protected, but rather the ideological purity of the lefty-Luddite faux environmental dieoff.orgy movement.

… the defeated international left gravitated to the environment movement as a way of obstructing the victorious forces of the free enterprise system, gradually, instinctively and opportunistically, not by any plan or prearrangement. They crowded onto the eco-bus and radicalized a positive and very respectable pro-Earth movement and pushed it, as waves of thought are pushed, to extremes from which they are already retreating (i.e. global warming to climate change). This may not be even be the conscious motive of many of them, though it is fairly obvious in the triumphalist Marxist revanchisme of people like Naomi Klein, celebrating by anticipation, the counter humiliation of capitalism by the alarmists of Eco-Horror Inc.

Once an intellectual fad attained such a state of permeation that it was impossible to set foot out of doors without being disparaged for unkindness to vegetables, and for desecration of grass, our politicians rushed head-long to the head of the mob, over-committed themselves to the cultish fad, rivalled each other in their trillings of virtue and shrieks of eco-vengeance. It was a perfect cycle of an apprehended event and the rousing of public opinion to meet an immense existential challenge. Horizons darkened with these absurd and noisy, bird-unfriendly windmills, and energy consumers are saddled with the preposterous costs of solar energy. There is only one fundamental problem: there is still no evidence that the world is getting warmer or that the climate is changing in any identifiable way. __ National Post

Currently in control of governments, universities, most media outlets, primary education down to pre-school levels — these lefty-green cultists have indoctrinated entire generations with their pseudo-scientific nonsense.

They are foisting their delusional beliefs onto national and international economic treaties, and contributing to an ongoing impoverishment of middle classes across the developed world.

The climate impact of all Paris INDC promises is minuscule: if we measure the impact of every nation fulfilling every promise by 2030, the total temperature reduction will be 0.048°C (0.086°F) by 2100.

Not only that. The climate circus — the Climate Apocalypse Cult™ Crusade — is doing more harm to the human future than all terrorists, Chinese hackers, and dysgenic immigration put together. Beyond the devastating economic harm, the future of science itself is being undermined.

For humans to be able to create an abundant and expansive future that will take them beyond the stars, they must be able to build success upon success. Most might think that someone like Jeff Bezos has it made, with Amazon and his $billions. But big success #1 is just the beginning: That is why Bezos invests in spaceflight, nuclear fusion, 3D printing, and dozens of other potentially important pieces to the puzzle of the future. It’s not just about the money for guys like this.

So why are the corrupt and deluded jerks recently in Paris, trying so hard to smother the future in its cradle? Because for them, it is all about the money, the power, the groupthink ideology, the fashionable thing to be seen doing, the false sense of relevance. What is an intangible concept like “an abundant and expansive human future” to drone clones like that? Nothing but something to share a laugh about, and then to shudder secretly in fear lest it actually happen.

This is high stakes poker, and only a few of the players understand what is being wagered.

Much Ado About Nothing