Why Russia and China Can’t Innovate

Once upon a time, Russia and China were considered the economic powerhouses of the future. Those two bright stars — along with the rest of the BRICS and Turkey — were supposed to propel the global economy through the 21st century. But things change, and hidden faults that only a few were able to see, have been revealed … and fortunes have fallen. 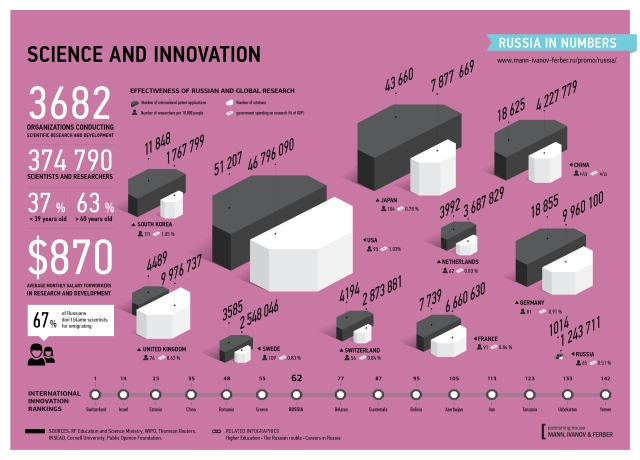 Can You Find Russia?
http://archive.rusbase.com/news/author/benhopkins/infographic-science-innovation/

The Russian business environment does not provide conditions and a level playing field for small and medium businesses to develop and operate effectively. The situation in the country has created a maelstrom of vicious cycles, where the people do not trust the government and the government is afraid to make the courts independent, open up the political process, and liberalize the media due to fears of being overthrown by a wave of discontent.

Twenty years after the collapse of Communism, Russia increasingly abuses individuals’ economic and property rights, thereby reducing the attractiveness of the country at home and its global competitiveness abroad. These developments are having dire consequences, including violence, a bloody revolution, and potentially, a civil war, for the country and the citizens, as economic growth slows down and the best and the brightest lose any hope and faith in the future of their country. __ http://www.heritage.org/research/reports/2014/09/russias-avoidable-economic-decline

Russia’s situation has only been made worse by the Kremlin’s mad military adventurism — its dismal outcomes obscured by a suffocating propaganda smokescreen.

“All that Russians have gotten from Putin’s international activity is a boost to their pride, delivered by the Kremlin’s propaganda channels — not a tangible benefit as the economy continues to buckle under the weight of falling commodity prices.”

… Over the last year, inflation has soared, real incomes have plummeted, and purchasing power has evaporated. With oil prices at historic lows with no recovery in sight and Western sanctions remaining in place, there is little chance things will get better soon.

Supreme Comrade Ceausescu had a hallucination of 97% approval until 21 Dec 1989. Next day he got an approval of minus 97%, 3 days later he was killed. __ [from comment following the article linked above]

… at this stage, it’s mostly “dumb money” going into China. It “chases quick wins, investing fads, and propositions without real value or differentiation.”

… the newfound Chinese millionaires and billionaires don’t understand the venture game and chase quick returns rather than build businesses by offering money and expertise.

… the quantity of engineers and scientists is staggering, the quality is lacking.

“Sheer numbers of graduates are not translating into talent that can turn ideas into scalable businesses,” says Roth.

… “Chinese companies have an abundance of structures and processes, but suffer from the inability to translate these into an increased stream of value creating innovation,” he writes. Economies of scale aren’t creating more innovation as the average size of the Chinese company has increased.

Roth says that the hierarchical structure of the typical Chinese company stifles innovative thinking and focuses on leadership and execution rather than bottom-up creativity. “The leadership makes decisions to reinforce the status quo and solidify management power bases,” Roth writes.

He could say the same about the Chinese economy as a whole.
__ http://www.theepochtimes.com/n3/1923995-if-china-wants-to-innovate-it-needs-to-overcome-these-challenges/

What is true for Russia and China, is true for the BRICS and other emerging economies as a whole. Corruption and vested interests combine with oppressive economic traditions to hold new and useful innovative people and practises down. 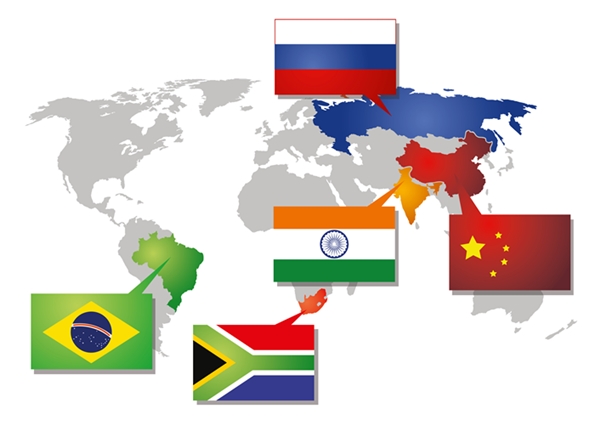 Instead of realizing their dream of surpassing the old world economic powers, most of BRICS’ economies are dropping faster than a falling brick… Brazil’s economy fell into deep recession and Brazilians have taken to the streets in protest. Russia’s economy is significantly contracting, triggered by low oil prices. China’s economy is cooling off despite the government’s best efforts. South Africa’s economy has weakened with decreasing GDP and rising unemployment. India’s economy is the only one that is maintaining momentum.

…. a slower-growing China needs less from Asia’s mines, wells, plantations and factories. China’s imports from the rest of Asia sank 13% in the first nine months of this year, according to CEIC data, leading a region-wide export slump.

Worries about China combined with continued stress in Europe in April to rattle confidence in the global economy. With the European Central Bank launching its own money-printing program, German bond yields sank below zero. The International Monetary Fund’s managing director, Christine Lagarde, warned of a “new mediocre” for global growth, prompting investors to push out past September their expectations for when the U.S. Federal Reserve would at last be able to lift its benchmark interest rate above zero.

The World Bank trimmed its economic outlook for developing East Asia and the region’s policymakers embarked on a fusillade of interest rate cuts. Led by China and New Zealand, Asia’s central banks have treated markets to no less than 13 interest-rate cuts since the end of March.

With the return on money invested in Asia dropping and expectations still in place for U.S. rates to rise, investors packed their bags and headed for the relative safety and higher returns of North America. 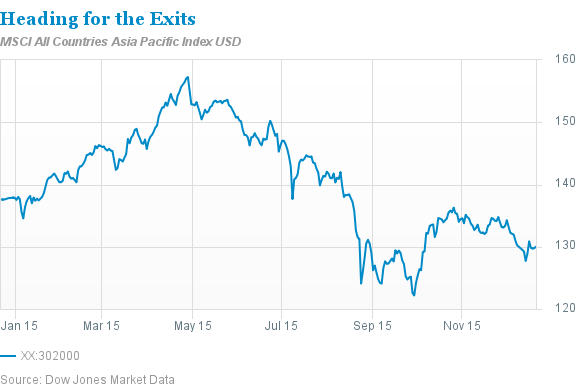 Other nations are turning away from corrupt authoritarianism and populism in an attempt to woo the gods of economic prosperity, who seem to be repulsed by the corrupt totalitarians and liars who traditionally rise to the top of most political forms.

For example, in formerly fading Argentina, a new president is attempting to take the anti-populist path — a path that has typically worked whenever tried persistently. One hundred years ago, Argentina was the shining star of South America. Alternating populist corruption and military coups stopped Argentinian prosperity in its tracks until now. Now the nation of rich farmlands and ranchlands will attempt once again to make money the old-fashioned way: by earning it.

Revolution: One week into office, Argentina’s new president has slashed taxes, ripped out capital controls and restored the peso to its natural level. It takes guts, but this blaze of reforms has worked wherever it’s been tried.

The markets certainly think it will, with some stocks rising as much as 5% and the overall market not panicking in the wake of President Mauricio Macri’s announcement that capital controls are now a thing of the past. The move triggered a wrenching 27% devaluation of Argentine currency, causing it to fall from 9.8 pesos to the U.S. dollar to 13.9.

It will likely force prices to rise by half in the short term and could trigger protests from the country’s powerful Peronist unions. But it’s the speed with which the move took place that puts time on Macri’s side and a sign that the distasteful maneuver will work.

After all, Macri has been in office since only Dec. 10, and his biggest likely political opponents, such as the Peronist socialist labor unions, are still licking their wounds since his landslide victory. Economists such as Johns Hopkins University’s Steve Hanke have pointed out in the past that free-market reforms tend to have the best results when they are executed quickly, with conviction. That’s precisely the path Macri is taking in his lightning-bolt moves. It’s an interesting thing from a man whose family business has included race cars.

What’s more, unlike devaluations past, Macri prepared the country for this one. The need for the devaluation is the ugly result of the previous socialist government’s effort to control the economy and create a falsely inflated currency based on phony statistics so bad that even the International Monetary Fund complained.

Three days ago, Macri set the country up for recovery by cutting its punitive personal and export taxes so that there would be incentive to work and save.

Two days ago, he lifted capital controls so that export trade, Argentina’s great competitive advantage, could take off once again. Argentina’s farmers and ranchers have said that they could rake in $400 million a day in export revenues based on high inventories of grains and other agricultural products if those punitive taxes were scrapped. Barron’s reported that they pulled in only $72 million in seven days last week, so the capital inflows should be instant.

A few days before that, Macri moved to protect savers somewhat by firing the central bank chief and having the new one hike interest rates from 7% to 38% to alleviate the shock of devaluation. He also sold $3 billion in Chinese yuan and other not-so-useful foreign currencies touted by the anti-American crowd and bought U.S. dollars to help buttress the country’s foreign exchange cushion and protect savers some more.

Russia and China are attempting to win through bluff, bluster, intimidation, and military shows of force. If those countries had put half the effort into genuine innovation and solid and integrated economic growth as they have put into propaganda and military spending, they would be much more powerful forces with which to reckon.

Both China and Russia suffer from brain drain, capital flight, massive infrastructural decay, toxic land-water-air, top-heavy unstable and corrupt governance, and a will to dominance that they cannot live up to.

Can China Stop Itself from Self-Destructing? 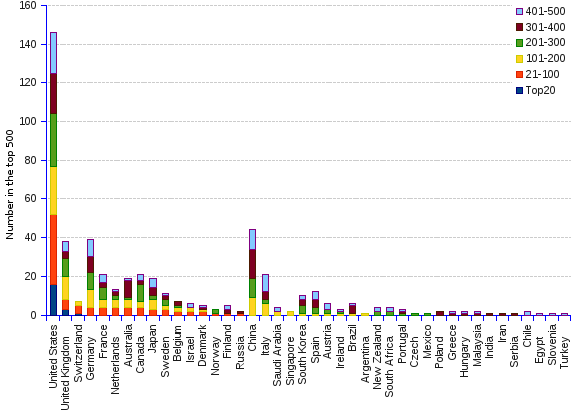