Global Civilisations in 2016: The Clash Has Not Been Cancelled

Muslims have more children than members of the seven other major religious groups… Muslims have the youngest median age (23 in 2010) of all major religious groups… More than a third of Muslims are concentrated in Africa and the Middle East, regions that are projected to have the biggest population increases. But even within these high-growth regions – as well as others – Muslims are projected to grow faster than members of other groups. 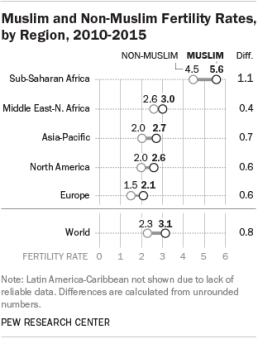 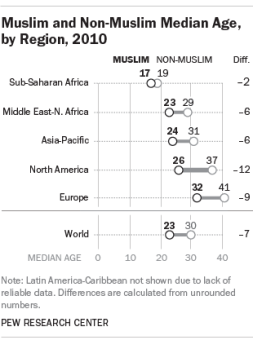 Islam is Not Alone, but it Takes Centre Stage

The Clash is Fueled by Economics, Ideology, Tribalism, raw thirst for power, human gene expression, and a Muslim Youth Bulge ™ that simply will not quit. 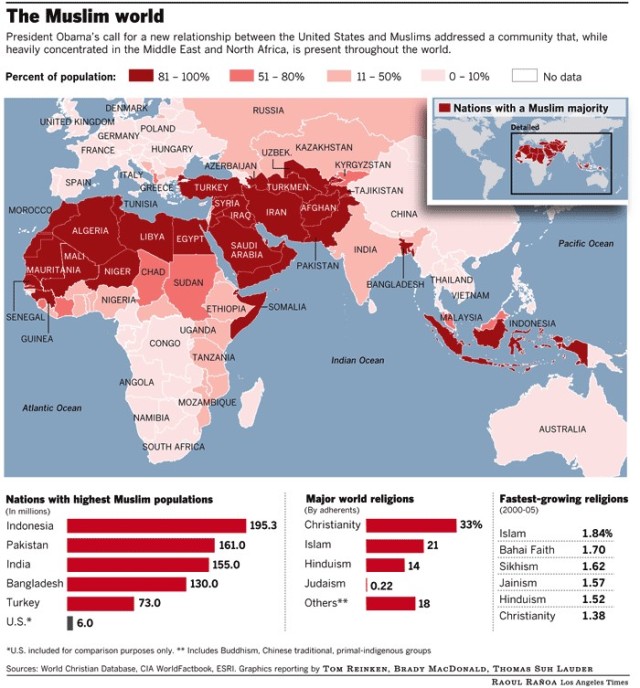 Most of the violent bloodletting taking place in the newborn year of 2016 occurs within or along the borderlands of the world of Islam. Many Islamic nations of tribal culture continue to have fertility rates double or triple those of the advanced world.

The main reasons for Islam’s growth ultimately involve simple demographics. To begin with, Muslims have more children than members of the seven other major religious groups analyzed in the study… The growth of the Muslim population also is helped by the fact that Muslims have the youngest median age (23 in 2010) of all major religious groups, seven years younger than the median age of non-Muslims (30). A larger share of Muslims will soon be at the point in their lives when people begin having children. This, combined with high fertility rates, will accelerate Muslim population growth.

More than a third of Muslims are concentrated in Africa and the Middle East, regions that are projected to have the biggest population increases. But even within these high-growth regions – as well as others – Muslims are projected to grow faster than members of other groups. __ Breeding Islamic Growth 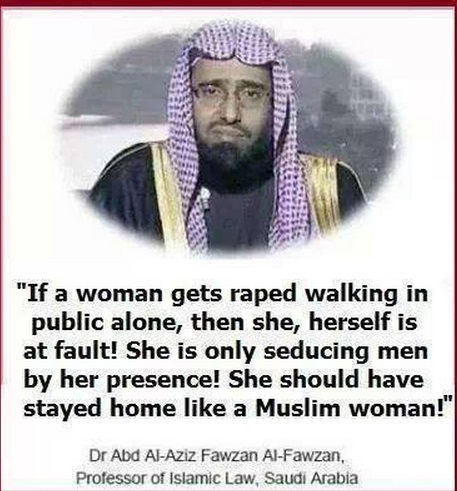 All Your Women Am Belonging to Me
http://www.blazingcatfur.ca/ 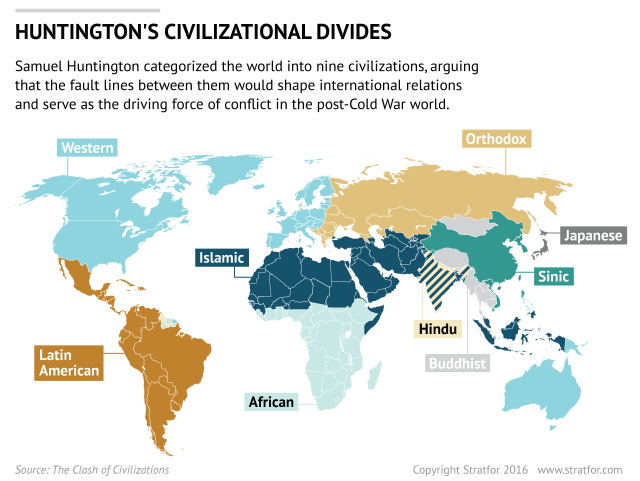 Like the Islamic world, the Sinic civilization believes itself to be superior to the West, and Huntington predicted it would therefore seek to challenge the West and its designs for global influence. China’s resistance to Western supremacy stems from its Confucian values, which emphasize the importance of hierarchy, authority, consensus and the state’s dominion over society and which clash with American beliefs of liberty, equality, democracy and individualism. The chasm between the two makes a Western-style political structure incompatible with Chinese cultural and civilizational traditions, just as it is incompatible with the Islamic world’s rejection of the separation of church and state. As a result, the relationship between the two civilizations would become increasingly confrontational, especially as China’s economic and military power expands and Beijing begins to pursue a role as a regional hegemon. __ https://www.stratfor.com/analysis/why-civilizations-really-clash

Sometimes prosperity can temporarily calm waters that might otherwise erupt into violent storms. But in 2016, prosperity may not be in the cards for the primitive world and the emerging world, including the BRICS.

Brazil, Russia, India, China and South Africa – the so-called Brics economies – could all face problems simultaneously would put in jeopardy the chances of a pick-up in growth in the coming year __ http://www.theguardian.com/business/2016/jan/06/world-bank-perfect-storm-warning-2016-slowdown-brics-economies

Some people are holding India up as an exception to the rule, but they may be a touch optimistic. Not to mention a bit deluded — if they think that economics can be separated from geopolitics, that is.

Among the seven emerging economies (China, India, Brazil, Mexico, Russia, Indonesia and Turkey), India will be a “star performer”, while the Brazilian and Russian economies will contract and China will slow down, the report said.

… The migrant crisis in Europe, the response of the international community to the crisis in the Middle East and the referendum on the fate of the UK’s membership of the European Union, will be the three major geopolitical issues to dominate the news headlines.
__ http://economictimes.indiatimes.com/news/economy/indicators/india-to-be-star-performer-china-to-slow-down-in-2016-pwc/articleshow/50517644.cms

India is a nation convulsed with religious, cultural, and economic schism. It is precariously perched between China and Pakistan. When Russia and China come to blows over the rich resources of the Far East, India had best stay out of it.

The Clash of Civilizations holds many insights that provided useful context for a good share of the conflicts that have taken place over the past 20 years and remain relevant to this day. With an eventful and volatile 2015 behind us and 2016 ahead, one of these insights is especially worth considering:

“Instead of promoting the supposedly universal features of one civilization, the requisites for cultural coexistence demand a search for what is common to most civilizations. In a multicivilizational world the constructive course is to renounce universalism, accept diversity, and seek commonalities.”

Of course, searching for common values and accepting the differences of others will not fully eliminate conflict, which has existed throughout human history and will continue to do so. __ Why Do Civilisations Clash?

In the massively connected world of 2016, nothing happens in isolation. Geopolitics, economics, and ideology all intertwine to form the perfect storm of clashing civilisations of 2016.

Even government employees in Russia are not being paid

Clearly the government is worried that what little money is left in the country will disappear. Between 2014 and 2015 – as the economic crisis started to bite – there was capital flight estimated to be worth around $151 billion.

Every year worse than the last from now on?

Blame Putin, not sanctions and oil prices for Russia’s woes. All the cash and smart people are gone. All that is left is corruption, murder, and cheap vodka.

One reason for the Russian decline is the inability to keep up in developing new technology. Russian tech is increasingly seen as backward and unreliable. Thus India is threatening to cancel its order for 154 of the new Russian T-50 “stealth fighter” because of growing delays in the program. It’s not just the high-tech T-50 but several other new Russian aircraft, both military and commercial. Same with Russian efforts in space. Growing quality control problems and delays in developing new technology has damaged Russian efforts to remain a major power in space or in any high-tech field.

… The collapse of the Soviet Union in 1991 led to a lot of the best talent leaving state run enterprises and there is no easy way to get them back. The growth of the police state in Russia has led to a more (over a million) of these skilled and talented people migrating. This has hurt the Russian economy across the board. The fundamental problem is an ineffective government that tolerates widespread and crippling corruption. Instead of addressing that problem the government blames all the problems on NATO plots to destroy Russia. __ Propaganda Industry Only Russian Industry Still Working

“A gas station pretending to be a superpower.

An aggressor country as the guarantor of a peace agreement.

A former German chancellor as an apparatchik of Gazprom and a former British prime minister as a Nazarbayev advisor.

Siemens AG Daimler and Mercedes Benz as the face of Western business and at the same time of corruption – competition for these roles is enormous.

Liberals in the Russian government as a group working for the salvation of autocracy.

Rights activists who receive grants from the Kremlin for the defense of rights and freedoms, a problem which the Kremlin has already solved.

Russian democrats who instruct Ukraine how to conduct reforms.

Experts and politicians who complain about the ‘denigration’ of Russia from nice houses in Londongrad.

Nationalism – we defend Russian speakers! – as an instrument for saving an empire that has as yet not fully disintegrated.

Analysts who show that there is ‘a demand’ in Russia for that power which we have.

Political analysts who assert that the more we imitate democracy, the greater the chances that it will appear with us.

America as a system-forming factor of the Russian state, [but] what will happen with the legitimation of the Kremlin if the Americans suddenly fly off to the moon?

Pavlovsky and Belkovsky as gurus of liberal-democratic thought; others are not required, which says a lot about the audience.

‘The collapse is coming!’ as a stimulus for happiness.” __ Lilia Shevtsova

But in Russia, we have always expected serfs to serf, and lords to lord. Being lied to and abused is the normal state of living inside Russia.

Ukraine is tooling for clash

Finland, the Baltics, and much of Eastern Europe are tooling for clash.

Is the West Better than the Broken BRICS and the Primitive Third World?

The modern west is so drunk and indoctrinated by media, government, “education,” multicultural political correctness, and other cultural institutions of inane delusion, that its people can no longer distinguish the probable from the improbable, the darkness from the light.

And yet there are huge gaps in the western matrix that can be exploited by smart folk. And as what is left of opportunity societies crank out more and more disruptive technologies, the gaps will only grow larger.

3 Responses to Global Civilisations in 2016: The Clash Has Not Been Cancelled