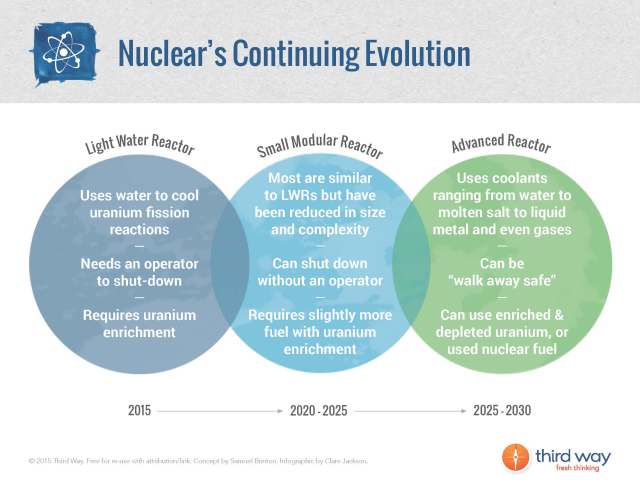 An Exciting Time to be a Nuclear Power Engineer

“As a professor, now is a very exciting time to be in nuclear engineering. The students in the program haven’t been around long enough to know that everything moves slowly in nuclear. They don’t know that yet. Nobody told them.”

“You have people who chose nuclear because they want to help save the world. They’re excited and giving them a way to both develop new technologies themselves so that we can have many ideas that can help us solve the economics problem is one of the ways to do it. But also getting them involved in such a way that the current knowledge is not lost. Plugging into the GAIN initiative, making sure they can understand what’s going on with the current fleet, how do we transition… They’re very excited; there are a lot of ideas.”

One of the more intriguing designs is Terrapower‘s traveling wave reactor, a fast reactor that will use depleted uranium as a fuel source. Depleted uranium is now essentially a waste product leftover from producing fuel for conventional reactors. The company signed a memorandum of understanding last year with the China National Nuclear Corporation with the goal of building a 600-megawatt demonstration plant by 2020.

TransatomicTransatomic is developing a molten salt reactor. The low-enriched uranium is dissolved in lithium fluoride salt that enables the reactor to burn nuclear spent fuel to produce heat to drive the turbines that generate electricity. The company claims that its reactors could convert the current stock of 270,000 tons of spent nuclear fuel into enough energy to power the entire world for 72 years. They also claim that their reactors would be “walk away safe.” Unlike conventional light water reactors, Transatomic reactors operate at atmospheric pressure; if the reactor should lose electrical power, the molten contents would dissolve a salt plug and safely drain out into an auxiliary container, where it would cool and freeze in just a few hours.

TerrestrialThe Canadian/U.S. Terrestrial Energy is also developing a molten salt reactor. Terrestrial’s Integral Molten Salt Reactor design is fashioned around core units that function for seven years and then are swapped out for new units. The company is seeking regulatory approval for its first plant in Canada, which would begin generating power in the early 2020s. The company makes the remarkable claim that the levelized cost of its electricity—that is, the cost taking capital, fuel, operation, and maintenance into account—would be 4 to 5 cents per kilowatt-hour. The U.S. Energy Information Administration estimates that the levelized cost of electricity from natural gas power plants is around 7 to 8 cents per kilowatt-hour.

Oklo, formerly named UPower, aims to create small 2-megawatt reactors that fit inside a shipping container. The reactors would compete with small diesel generators that are often used to generate electricity in remote off-grid locations. (The fact that the company changed its name to the site of an ancient natural nuclear reactor is intriguing.)

But essentially all the panelists agreed that the current regulatory structure is far from “right.”

Naturally, the NRC’s representatives pleaded that it was all that the agency could do to oversee the safety of the country’s current fleet of reactors, many of which will be coming up for their second relicense renewals soon. If the NRC does not authorize them to operate for an additional 20 years, they may have to be replaced with new power plants that burn carbon-emitting fossil fuels.

One big roadblock to innovation is that under the NRC’s enabling legislation, the agency is only able to consider approving a new power plant when its application is complete, noted Jennifer Uhle, head of the Office of New Reactors. Filing a complete application requires doing all of the engineering and legal work in advance. That generally takes a decade for conventional designs financed by giant utility companies. Entrepreneurs pursuing innovative designs don’t have the capital to endure this.

Nuclear power is the safest form of power generation, in terms of deaths / TWh

Nuclear power has endured because it has proved reliable, effective, and affordable. The basic facts are not in dispute among energy policymakers.

In America, the performance of nuclear plants has improved significantly since 1990. In 2014, according to the Energy Information Administration, the capacity factor—how often a power plant actually delivers power to the electric grid—for about 100 operating reactors was 90 percent.

Anticipating a more future-oriented government after the ejection of Obama, developers of Small Modular Reactors (SMRs) are forming a lobbying group in Washington DC.

This level of technical expertise is available in the west, but in few other places.

Nuclear power plants do not belong in Africa, Arab nations, or other regions with low average population IQ. Newer generation reactors will help expand the useful range of nuclear power — but the lack of reliable maintenance in third world nations is a distinct limiting factor in the safe spread of nuclear energy outside the more advanced world.

China and Russia are leading the world in contracts for new nuclear construction. Unfortunately, neither nation is known for its attention to safety — and neither nation is currently on a sound economic footing. Contracts and announcements of new construction is not the same thing as successful completion or safe operation.

2 Responses to Advanced Nuclear Reactors: The Future of Large-Scale Energy