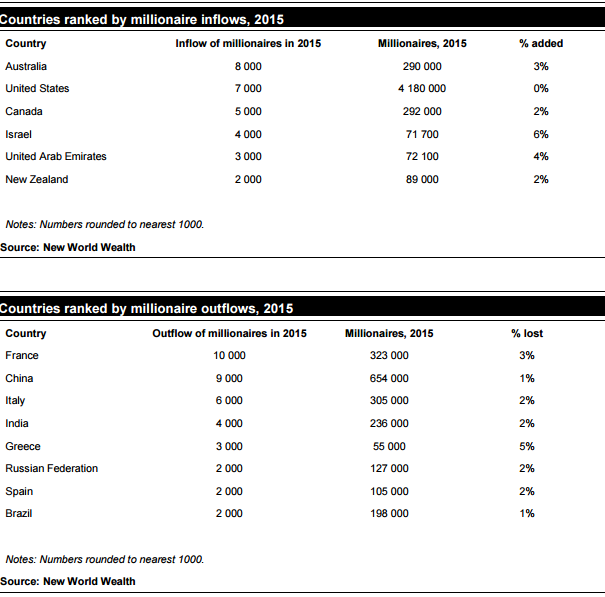 Russia has come sixth in a ranking of countries with the highest outflow of dollar millionaires, according to a recent report.

As a result, the total number of millionaires in Russia has decreased by 2 percent to 127,000, according to the report…

The top three countries which saw an increase in millionaires in 2015 include Australia, the United States and Canada…

The authors of the report said that Russia’s outflow of millionaires is “concerning.” They attribute it to a range of problems including “unhealthy level of government intervention in the local business sector” and an “anti-U.S. stance,” that makes it difficult for foreign companies to access the market.

Reasons for the millionaires’ wanting to get out of Europe include concern about out-of-control migration, among other things.

Millionaires are leaving Europe because of rising religious tension and concerns about the sluggish economy and the influx of migrants from Syria, a wealth analysis expert said.

… Millionaire migration may provide an indicator of upcoming trends among the rest of the population, as the wealthy are typically more geographically mobile than others. Millionaire emigration also hits government tax revenues and may be associated with loss of jobs and money outflows that can impact property prices and the financial markets.
__ Rich Leaving Europe

“The outflows from India and China are not particularly concerning as these countries are still producing far more new millionaires than they are losing,” the report said and added that “once the standard of living in these countries improves, we expect several wealthy people to move back.”

For many millionaires who fall from the good graces of despotic government leaders, getting out of the country may be beneficial to one’s long term longevity chances. Corruption and stifling government interference also play a large role in the escape decisions of millionaires from Russia, China, India, Brazil, and parts of Europe.

This entry was posted in Demographics and tagged Demographic Decline. Bookmark the permalink.
%d bloggers like this: