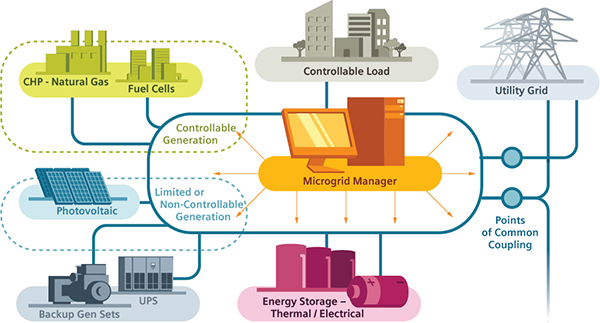 First of all, microgrids have nothing to do with unreliable intermittent energy schemes such as big wind farms and industrial solar power arrays. Microgrids are about building robust resilience into larger power systems. They are also about constructing small, reliable power grids in isolated locations such as islands and other communities located far from established power grids. More detail:

A microgrid is a discrete energy system consisting of distributed energy sources (including demand management, storage, and generation) and loads capable of operating in parallel with, or independently from, the main power grid. The primary purpose is to ensure local, reliable, and affordable energy security for urban and rural communities, while also providing solutions for commercial, industrial, and federal government consumers. Benefits that extend to utilities and the community at large include … lowering stress on the transmission and distribution system.

In many respects, microgrids are smaller versions of the traditional power grid. Like current electrical grids, they consist of power generation, distribution, and controls such as voltage regulation and switch gears. However, microgrids differ from traditional electrical grids by providing a closer proximity between power generation and power use, resulting in efficiency increases and transmission reductions. Microgrids also integrate with renewable energy sources such as … small hydro, geothermal, waste-to-energy, and combined heat and power (CHP) systems.

Microgrids perform dynamic control over energy sources, enabling autonomous and automatic self-healing operations. During normal or peak usage, or at times of the primary power grid failure, a microgrid can operate independently of the larger grid and isolate it’s generation nodes and power loads from disturbance without affecting the larger grid’s integrity. Microgrids interoperate with existing power systems, information systems, and network infrastructure, and are capable of feeding power back to the larger grid during times of grid failure or power outages.
__ http://www.generalmicrogrids.com/#!about-microgrids/c1r3e 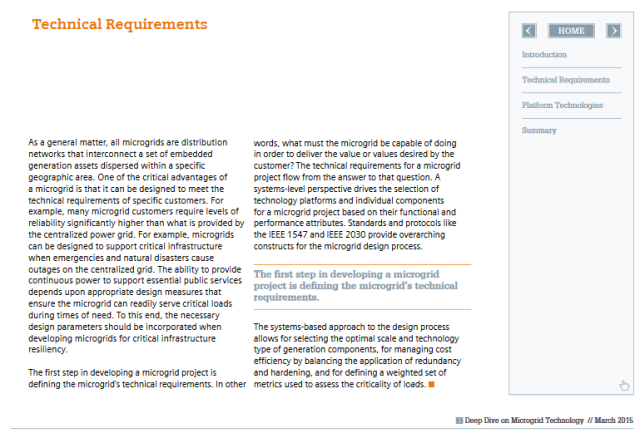 Resilience: Microgrids Can Disconnect from and Reconnect to the Main Grid

In case of weather-related outages, cyber-attack, EMP outage, or other forms of large-scale grid collapse, microgrids are capable of “islanding,” or standing alone from the power grid. This can be done proactively when a problem is anticipated, or it can be done quickly thanks to advanced sensor / actuator technologies.

One example of potential islanding from an Australian microgrid system:

The islanding capabilities of the [microgrid] system also show promise for reducing the severity and duration of outages in larger macro-grids as serious faults can be isolated and rectified, while the supply to interrupted areas is maintained by a GESS. Given the prevalence of bushfires in Victoria, the islanding and ‘bumpless’ reconnection capabilities of systems similar to the GESS may be used to mitigate the effect of such fires on the supply to remote and rural areas. In such cases, a feeder would be de-energized just prior to a bushfire passing through the area with any disconnected communities supplied by the GESS. Once the fire had passed through and the feeder checked for damage, the line would be re-energized before the GESS would perform a ‘bumpless’ transition, and the area could then be supplied by the feeder. __ http://microgridknowledge.com/batterydiesel-grid-connected-microgrids-a-case-study-of-future-microgrid-capabilities/ 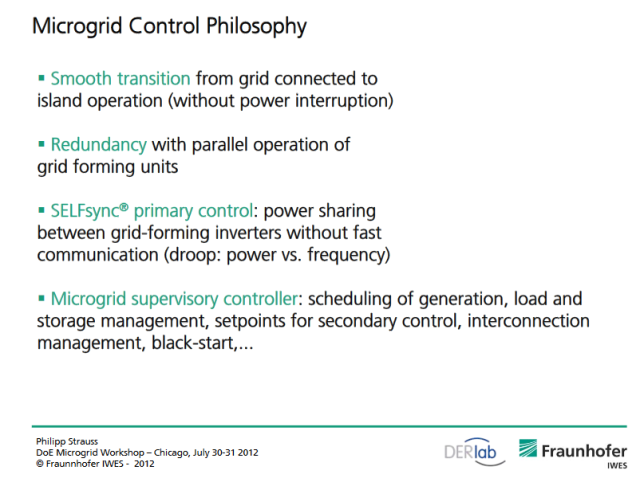 By providing additional buffering between the main power grid and the end customer — as well as additional generating and power conditioning systems capable of standing alone off-grid — microgrids have the potential to make the overall power supply more robust and resilient.

It should be easy to see the possibility for assembling backup microgrids that are not connected to either the larger power grid or the internet — ready to be powered up in case of severe emergencies. The electronic equipment for such standby systems can be hardened against EMP, and since it is not connected to the internet it is not as subject to cyber-mischief.

Islands of competence — such as Dangerous Communities — would prepare for potential emergencies so as to not be left without power to operate hospitals, fuel supplies, food growth and transport, and other crucial infrastructures.

Finally, don’t believe the hype about using microgrids to make large-scale wind and solar safe for the larger grid. The entire concept is economically suicidal and completely unnecessary — driven largely by fears of climate apocalypse and resource scarcity Armageddon. Microgrids have far better uses than as playthings for the green stupidity movement. 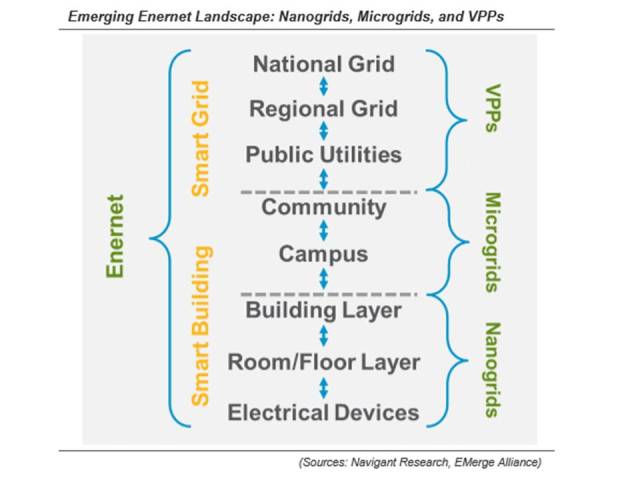 Keep in mind the life and death hazard of exposing critical power grid control systems to the global internet. Until grid cyber-security can be guaranteed, “smart grids” on large power grids should not be a consideration. Slimy green wishful thinking is no excuse for putting all of society at risk.