Humans Get Things Done When It’s Warmer Outside 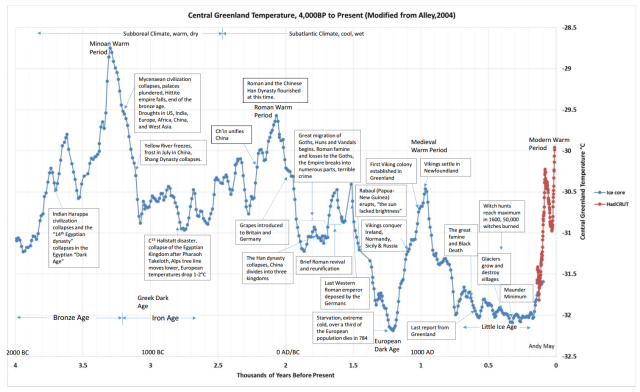 The timeline begins at 4,000 BP and it shows steady cooling to the Little Ice Age (roughly 1250 to 1850 AD). It is easy to see that the Roman Warm Period was cooler (at least in Greenland) than the Minoan Warm Period and the Medieval and Modern Warm Periods are cooler than the Roman Warm Period. The Little Ice Age was a horrible time for mankind according to Behringer. Glaciers advanced in the Alps and destroyed homes, it was a time of perpetual war, famines and plagues. Horrible persecutions of Jews and “witches” were common. Society was suffering from the cold and lack of food and they needed to blame someone. They chose Jews and old unmarried women unfortunately. Over 50,000 witches were burned alive. Tens of thousands of Jews were massacred. Not because there was any proof, just because someone had to suffer for the bad climate. Some people, the masses mainly, seem to need to blame someone or humanity’s sins for natural disasters. Behringer notes that in The Little Ice Age: “In a society with no concept of the accidental, there was a tendency to personalize misfortune.”

Today environmental zealots assume that climate change is not only man-made but dangerous. They have no proof of either assertion, of course, but they “believe” with religious fervor in both ideas. Then we see, in Behringer’s book, the following quote from Archbishop Agobard of Lyons (769-840 AD) in his sermon “On Hail and Thunder:”

“In these parts nearly everyone – nobles and common folk, town and country, young and old – believe that human beings can bring about hail and thunder…We have seen and heard how most people are gripped by such nonsense, indeed possessed by such stupidity…”

Too Bad that the Sun May Have Other Ideas: New Solar Minimum

Variations in the activity of the sun, and of the Earth’s orbit around the sun, probably have more control over cyclic ocean temperatures and atmospheric climate phases than any trace gases in the atmosphere. But the sun is influenced by the planets — not in the sense of superstitious astrological projection, but in the sense of gravitational influences. Professor Judith Curry looks at recent evidence that the sun is due for a new solar minimum:

… millennia-scale solar oscillations have been recently detected, like those of about 6000 and 2400 years, with important and interesting influences in the near, past and future climate. These millennial scale patterns of reconstructed SA variability could justify epochs of low activity, such as the Maunder Minimum, as well as epochs of enhanced activity, such as the current Modern Maximum, and the Medieval Maximum in the 12th century.

Although the reason for these SA oscillations is unclear, it has been proposed that they are due to chaotic behavior of non-linear dynamo equations, or stochastic instabilities forcing the solar dynamo, leading to on-off intermittency, or planetary gravitational forcing with recurrent multi-decadal, multi-centennial and longer patterns. It should be noted that all proponents of planetary forcing have forecasted a solar Grand Minimum for the upcoming decades, but one of them has also forecasted a Super Minimum for the next centuries. In addition, during recent decades, statistical forecasts (with physically based spectral information of reconstructed records) of solar magnetic activity predict a clear decrease in SA, reaching a minimum around AD2100.

A climate driven by solar driven ocean cycles is a far cry from what we are being told by climate apocalyptics in corrupt governments, an insular academia, a mainstream media, and big money political/environmental activist groups. Energy and economic systems of Europe and much of the Anglosphere are being overturned — and made more vulnerable to unpredictable events — by powerful vested interests that drive the cult-like climate apocalypse movement from the top-down, without tangible proof or real evidence.

Europe and the Anglosphere Will be Unprepared Should Things Turn Colder

By discarding its reliable and productive nuclear power plants, coal power plants, and other machinery of modern civilisation that make it possible to keep the lights on, indoor temperatures comfortable, and supports the rest of civilisation’s critical infrastructure — societies are opening themselves to unexpected sea changes that could easily threaten their very existence.

Europe and the Anglosphere were built by populations that are being replaced by less capable, more violent newcomers, who will not have the best interests of established society at heart, should things turn sour. Newcomers are not truly assimilating, and tend to form ghettos apart from the main. Thus the lines of fragmentation are laid before the greater stresses are applied.

By abandoning reliable power and energy in favour of intermittent unreliables, by reducing their fertility rates, and by opening their doors to less intelligent and more violent flows of fertile newcomers, western societies are betting that nothing can possibly go wrong on a grand scale that might tip their affluent, peaceful existences into much crueler and brutish regimes of existence.

Humans are generally stupid, and governments are typically corrupt. Elitists manage government, media, academia in the mainstream (and often on the fringes), as well as foundations, lobbies, activist groups, and nonprofits. Independent persons of intelligence and of medium levels of affluence are typically left to fend for themselves against the floods of red tape and taxes which elitist-controlled institutions throw in front of them.

Only by interacting and cooperating can brighter members of the middle and upper middle classes (along with other like minded persons) build the working alliances that can survive the natural result of top-level corruption and mass stupidity. These alliances — islands of competence — will often be in the best position to form nuclei for a more expansive and abundant human future.

It is not that the modern cults of climate and resource scarcity threaten to undermine existing systems of energy and economy that have allowed modern affluent civilisation to evolve. No, these cults — and others — threaten to abort the gestation and birth of an open-ended, abundant, expansive human future. And that is why brighter persons need to make provisions for the unexpected — particularly for the unorthodox unexpecteds.

Idiocracies are unable to resist invasions, conquests, and falling under the control of satrapies. The children of free persons can easily become serfs in an Idiocracy, or worse, if no provisions are made.

When the Future You Prepared For Doesn’t Happen, Time and Resources are Wasted

And those misallocated time and resources can never be gotten back. All of the time, money, and other resources devoted to the building of huge and unwieldy systems of intermittent, unreliable and unaffordable energy systems, can never be recovered when the unexpected happens and they are truly needed. And if you have destroyed the foundations of your civilisation while misallocating scarce resources to a nonsensical “future,” you are up defecation river without a paddle.

This is the situation western humans find themselves in, at this time. What they choose to do now, is up to them.

This entry was posted in Climate, Green Quagmire, Idiocracy and tagged Climate. Bookmark the permalink.