The Color of Crime in America 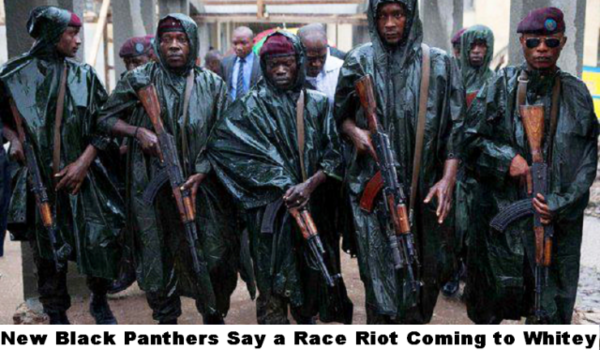 And no wonder! Gangsta rap tells blacks to kill cops and whites. Blacks are told by their community leaders and black activists to kill whites. “New Black Panther Party,” is a group with growing influence dedicated to committing election fraud and committing violence against whites. And the mainstream news media — and political leaders such as US President Obama and Minnesota Governor Mark Dayton — have misled blacks into believing that they are being slaughtered by white racist police officers.

A recent fatal shooting of a black man in Minnesota did not seem to have occurred in the way news outlets have portrayed it. The suspect was pulled over for suspicion of armed robbery. The Hispanic police officer who fatally shot the black suspect could clearly see a handgun on the suspect’s thigh. The female passenger who has become famous for her Facebook video of events after the shooting was found to have lied generated a misleading narrative on the video — according to police scanner audio the car was not (merely) stopped for a broken tail light and the shot man did not apparently hold a concealed weapons permit from the county where he resided had not applied for a concealed carry license in the county where the traffic stop and shooting occurred. A sheriff’s office spokesman in nearby Hennepin County refused to confirm or deny whether Castile had been issued a permit.

Updated information behind the Castile traffic stop and shooting

The official story behind the now-famous shooting of a black man in Baton Rouge, Louisiana, is even more suspect. He had a record of possession of stolen firearms, was a habitual criminal. Here is an account of an earlier misadventure the man had with police:

In May 2009, he was selling CDs outside a convenience store when a Baton Rouge officer asked if he had any weapons or drugs on him, according to a police report.

Sterling didn’t answer, and the officer had him put his hands on the police car, the report said. While being frisked for weapons, Sterling tried to reach into his front left pocket for an unknown item, the officer wrote.

Sterling then tried to run from the officer, who grabbed the back of his shirt and pushed him to the ground. During the struggle, a stolen 9mm semi-automatic pistol fell from Sterling’s waist band, the report said. __ SBPDL

His arrest record from the link above:

The media and opportunistic politicians are peddling a story of police officers gone wild, shooting and killing black men with prejudicial abandon. But the true story of race-motivated crime in the US is not being told, at least not by mainstream media or by public figures. One needs to look more deeply to discover the disturbing reality behind the public facade.

Updated 2016 Version of “The Color of Crime”: Crime Statistics by Races of Victims and Offenders Using Department of Justice Numbers

The evidence suggests that if there is police racial bias in arrests it is negligible. Victim and witness surveys show that police arrest violent criminals in close proportion to the rates at which criminals of different races commit violent crimes.

If New York City were all white, the murder rate would drop by 91 percent, the robbery rate by 81 percent, and the shootings rate by 97 percent.

In an all-white Chicago, murder would decline 90 percent, rape by 81 percent, and robbery by 90 percent.

In 2015, a black person was 2.45 times more likely than a white person to be shot and killed by the police. A Hispanic person was 1.21 times more likely. These figures are well within what would be expected given race differences in crime rates and likelihood to resist arrest.

Both violent and non-violent crime has been declining in the United States since a high in 1993. 2015 saw a disturbing rise in murder in major American cities that some observers associated with “depolicing” in response to intense media and public scrutiny of police activity.
Color of Crime 2016 Update

Less than 1% of homicides of blacks resulted from Police killings of “unarmed blacks.” These killings are regrettable, but occurred within specific contexts of the moment, which must be examined carefully on an individual basis. This is a far different situation than when blacks intentionally set out to murder whites, as occurred last week in Dallas.

For comparison, 93% of blacks are killed by other blacks.

The table below — taken from official US DOJ statistics — provides data that is further clarified by the pie charts further down the page:

__ From US DOJ Statistics

For all three categories of offenders — white, black, hispanic — victims are primarily or inordinately white. There are many different reasons why violent offenders tend to target whites. But it does not help that politicians, black activists, black “music,” and the mainstream media are all framing a false narrative that leads blacks to wish to avenge themselves upon whites.

Blacks are typically arrested more often for a wide range of crimes than members of other races in cities across the US. Blacks also make up far more than their proportionate population share in prison populations. Given the known cultural and genetic factors mentioned above, this disproportionate criminality is becoming easier to understand. And it also helps explain why police officers may be more on edge when confronted by an armed black man behaving in a suspicious manner.

Percentage of Arrests and Prisoners Who Were Black 2013
http://www.colorofcrime.com/2016/03/the-color-of-crime-2016-revised-edition/

Last published (2008) table of extensive interracial crime data by US DOJ, providing copious data supporting the findings in the multiple editions of The Color of Crime.

Until politicians, other public figures, the mainstream media, academics and schoolteachers, and other information gatekeepers begin to acknowledge the reality of violence and race, it will be up to individuals to watch out for themselves and their families. The jobs of police officers are put at especial risk by the official race narrative and disinformation campaign. If police are forbidden to defend themselves for reasons of political correctness and “affirmative action criminology,” society will lose one of its primary foundations of civil order — and massive multicultural violence becomes more likely.

The War on Cops

Update: The gang links of Alton Sterling and Philando Castile. Media myths can go down hard.

US residents killed by police officers so far in 2016

Suicide by cop in Houston: How many police officer shootings are induced by persons with covert suicidal impulses?

White teenager recently shot dead by police officers at traffic stop has not received nearly the media coverage as the recent celebrated police shooting of black gang members Sterling and Castile. Nevertheless, the fatal shooting of white teen Dylan Noble has all the markings of “suicide by cop.”

4 Responses to The Color of Crime in America