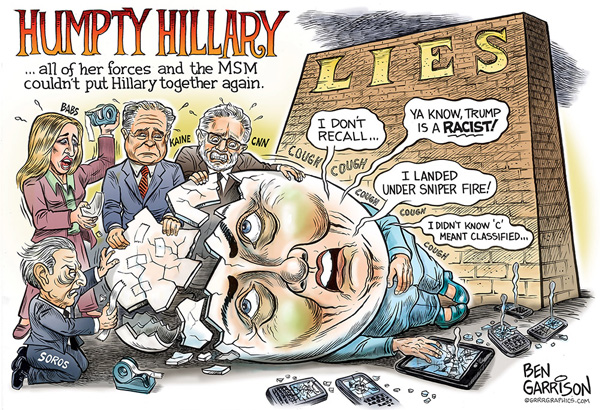 Hillary Dumpty: Putting It Together
Source

The United States has been the world’s richest nation since roughly 1890, for over a century. This long-lasting economic inequity has caused understandable discontent among a number of other nations and would-be superpowers. Even under President Barack Obama — arguably the most dysfunctional US presidential administration in history — the US has outpaced Europe, China, Japan, and all others who were supposed to have overtaken the US by now.

But with the candidacy of Hillary Clinton for US President, there are new reasons for optimism among economic, political, and military competitors of the US.

So even though Europe is in danger of fragmenting, China is mired in poverty, Russia is running out of money, Japan’s people are dying out, and most of the rest of the world (except the Anglosphere) is populated by people with average IQs too low to take care of themselves — much less take over the world — the coming of Hillary Dumpty means that the US will be vulnerable to outside competition like nothing since the late 1800s.

Although the Clinton campaign and its enablers in the media deny that there is anything wrong with Ms. Clinton’s health, in reality it is likely that physical limitations will curtail much normal presidential activity and initiative that would otherwise be expected of a US president. Although, to be fair, Ms. Clinton seems quite animated, in a relaxed manner, in the gif below.

So go ahead, America! Elect Hillary Dumpty and make the world a much fairer place for all the would-be superpowers that never had an honest chance to conquer (or destroy) the world, until now.

5 Responses to Electing Hillary Dumpty, Just to Make it Fair