Can the West Break its Addiction to the Corrupt Nanny State?

It Will Take Care of You and Keep You Safe

And it will take care of you. Just not in the ways you really need.

The fear of big government is near a record high in the US, despite the election of populist presidential candidate Donald Trump.

As businessman Donald Trump prepares to become the nation’s 45th president, Americans continue to express more concern about the threat big government poses to the U.S. than big business or big labor. Two in three Americans (67%) identify big government as the country’s biggest threat. That is below the record high of 72% in 2013 but still on the higher end of the range since the mid-1960s. __ Mish

It is Rational to Fear and Distrust Big Government

Big government siphons capital and talent away from the innovative and productive sectors, and dumps these valuable resources into the stagnant quagmire of corrupt crony rent-seeking. This can only create a long-term decay from massive debt and a decline of demographic quality — which is exactly what the US has been seeing under the Bush-Clinton-Bush-Obama cabal.

… the public and the private sectors compete for the same financial and human capital. That is to say, they compete for the same pile of money and the same group of innovative [people]… When profits are relatively easy to make in government contract work, there are fewer innovators willing to spend their time and their capital developing the next new innovation that could revolutionize an entire industry. __ Brendan Miniter “Why We Grow” in Chapter 1 of “Unleashing the Economic Growth America Needs”

After many years of living under an overbearing nanny government system, populations become dependent — with many of their natural competencies atrophying and diminishing to mere vestiges. Eventually, these lifelong adolescents cannot live without the things big government supplies them. Their brains become vestigial organs — sucking on the government breast becomes one of the few skills and competencies that most university educated persons retain. 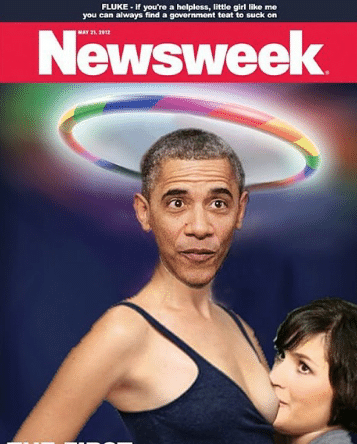 Terrorist attacks by muslims and racially motivated attacks by violent blacks become more frequent and almost impossible to fend off, as a general helplessness settles over the perpetual children of the cradle to grave nanny state.

And Then There Was Trump

And now we have Trump. He was elected to drain the swamp. He may be our last hope to tip the Big Club over a cliff. __ Canadian Radical Press

Something unexpected happened on the way to the eternal US nanny state. A populist candidate was elected on promises of “draining the swamp” and “making America great again” — instead of the usual promises of cradle to grave government guaranteed benefits, protections, and special preferences (eg “affirmative action” etc.). It is true that many dependencies on government are retained or renamed, but judging by the nature of many of Trump’s picks for cabinet positions, some serious “swamp-draining” activities are being set in motion.

Don’t Trust the Government — Trump or No Trump

The government is not the country. A prosperous and innovative society must be composed of competent citizens, capable of designing, building, and maintaining new and better infrastructures of living. That is the only pathway to an expansive and abundant human future. Those competencies cannot be mass produced by schools — government or private. They must be grown in a milieu of rich experimental opportunity, in an environment that fosters mastery of self and the immediate environment. Grit, self-reliance, independent thought free from the politically correct group-mind, must all be cultivated.

A wise government can best help by providing safety from fraud and violence, safe property rights, a stable monetary system, a transparent rule of law, and the freedoms which allow families and individuals to devise their own lives and futures. The US Constitution with its Bill of Rights was an excellent starting point.

But a wise, non-intrusive, minimal government can only be a starting point. Beyond that, it is up to the people themselves to build an abundant and expansive human future.

Hope for the best. Prepare for the worst. It is never too late (or early) to have a Dangerous Childhood.