Deep stresses within China’s bubble economy are building, forcing Beijing to take a neoimperial posture toward weaker nations in its vicinity. Inevitably, if China expands too forcefully, it risks war of a radioactive kind.

Some people ask themselves why [China] hasn’t collapsed yet. It’s been bad for a while. But it can be bad for a long time without collapsing. The ability of the [regime] to pull accounting tricks and move money around from the left pocket to the right pocket—that can go on for a long time.

If China collapses, its citizens will revolt and the government will be in danger of falling. The Communist government would go to war to stop that from happening. Who is the likely dance partner in China’s first nuclear exchange? The answer may surprise you. If so, read on to trace the flow of power and trade from Shanghai to Dubai to Marseilles.

It’s a frightening prospect, India and China going to war.
The countries are home to 2.5 billion people, a long and sometimes disputed border — which they’ve fought wars over — and each have nuclear weapons. __ CNN

China talks a lot about the “new silk road,” often referred to here as the One Yellow Brick Road (OYBR). It is important for intelligent readers to understand that it is the maritime route that is far more crucial to Chinese trade and projection of military power, rather than the more discussed and deeply troubled land route. And it is the sea route that will most likely lead to nuclear war for the Middle Kingdom.

And It is Out There, Beyond the China Seas, Where the Greatest Threat of Nuclear War Looms

The hottest hot spot China faces now — beyond Taiwan and the China Seas — is the small island state of Sri Lanka. Situated in the middle of strategic shipping lanes — and a prime location for military bases against India — China is desperate to take total control of Sri Lankan territory in order to establish a permanent presence in the middle of the Indian Ocean.

… China… has proven to be a “friend in need”: Chinese aid and credit accounted for $5 billion after the [Sri Lanka] civil war. Moreover, China initiated large-scale infrastructure projects in the country, such as the Hambantota and Colombo ports. In these circumstances, Chinese support quickly became one of the underpinnings of Rajapaksa’s autocratic rule and Sri Lanka seemed to be inevitably and exclusively drifting toward China… __ China Pulls Out All Stops to Dominate Asia

Sri Lanka forced to pay over a third of revenues to service Chinese loans!

Under a US President Hillary Clinton, China would have felt much freer to press its rights to control Sri Lankan territory — just as it has felt free to assert its rights over territory claimed by Vietnam, Japan, Philippines, Indonesia, and other sovereign states in the China Seas region, under a weak president Obama.

China has come out of the closet as a fully multi-faceted neo-imperialist, and the global fallout from that decision has barely begun to register on the geiger counter — perhaps because China’s imperialism has been limited to the economic realm for the most part, so far. But never underestimate the mindless desperation of a communist dictator when pushed against a wall.

China’s access to the Pacific is limited by two obstacles. The first is the small island chains in the South and East China Seas. When we look at this map, China’s motive in asserting control over these large rocks becomes clear. If China cannot control these islands and shoals, they can be used against China in a military conflict.

The second obstacle is that China is surrounded by American allies. Some such as Japan (and to a lesser extent South Korea and Taiwan) have significant military forces to defend themselves from Chinese encroachment. Taiwan sticks out as a major spur aimed squarely at China’s southeast coast. Those that don’t have sufficient military defenses, like the Philippines, have firm US security guarantees. China is currently at a serious geographic disadvantage in the waters off its coast. __ Source

China needs unrestricted access to all the world’s oceans if it is to be able to wield the level of global power and influence which it feels is necessary to meet its goals. 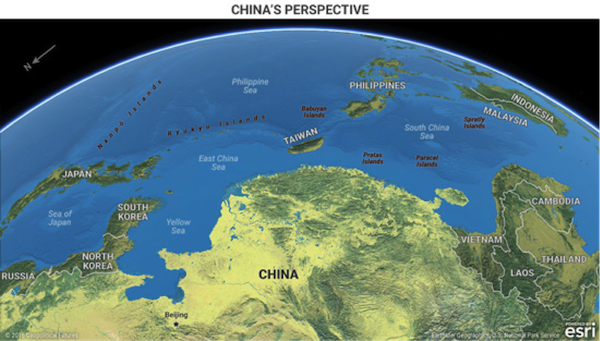 China’s access to the wide oceans is blocked by a cage of islands stretching from Japan to Indonesia. China has tried to mitigate its confinement by placing military weapons systems on illegally claimed ocean territories and on artificial islands in the China seas. But success in that aggressive venture is not guaranteed in the age of Trump.

China’s man-made islands encroach on the sovereign territory and Exclusive Economic Zones of the Philippines, Malaysia and Vietnam. The islets and Beijing’s claim to sovereignty also challenge Indonesian territorial sovereignty. Singapore is wary, and Singapore sits on the Strait of Malacca, the primary shipping route between the Indian and Pacific Oceans.

And even if China should succeed in its illegal grab of international waters and foreign sovereign islands, its problems with access to the wider world’s blue oceans would just be beginning.

It is Clear that China Presents an Existential Threat to India

China is using economic bullying to take over control of small strategically placed nations from Sri Lanka to the Maldives to the Pakistan and beyond. A close look at sea maps in the Southeast and South Asia areas illustrate why China is so desperate to grab de facto control of such nations: China needs a clear sea path to the middle east, Africa, and Europe — which currently is obstructed by a plethora of inconvenient [to China] sovereign territories.

Will India Sit Still and Allow Neo-Imperial China to Encircle and Suffocate It?

India is a nuclear armed, highly populous nation on the economic and political ascendancy. It cannot allow itself to be subservient to China if it wants a meaningful future. The trajectory of China’s movements leads directly toward a nuclear confrontation with India. If China moves quickly, it hopes to intimidate India with a “fait accompli” in the region. But any complication which threatens to stall the dragon’s momentum calls China’s entire “One Yellow Brick Road” (OYBR) fantasy long-shot enterprise into question.

Both China and India are capable of building impressive high tech engines of advanced mass destruction. And both nations have displayed a rather casual attitude toward the possible loss of hundreds of millions of their citizens, in the cause of political advancement or survival. Easy come, easy go.

China represents an existential threat to all of East Asia, Southeast Asia, South Asia, and much of Russia. As such it is likely to earn a close look from newly elected Russian sympathiser Donald Trump — someone who has expressed antagonistic sentiments toward China on more than one occasion.

But Trump also comes across as something of an isolationist who would be extremely reluctant to go to war for the sake of foreign alliances. He is not likely to go to war with China in order to save Russia from territorial poaching, for example. But if China does continue to isolate itself through its blatant economic and military neoimperialism, the balance of global sentiment may support near unanimous pressure on China of a somewhat prejudicial nature. In the case of universal condemnation of China, Trump may sign off on limited and clearly defined joint action, so long as costs were widely shared between several other significant nations of influence.

Trump Has Other Priorities

In the earliest stages of his presidency, Trump intends to demonstrate the seriousness and potency of his desire to benefit “the forgotten man” who has been left behind by corrupt administrations of the past. Such domestic intent takes priority over any questionable and complicated efforts to discipline bad overseas actors such as Xi’s China.

Once progress is demonstrated on the domestic front, it is likely that US administration viewpoints will begin to coalesce in unexpected ways around challenges of a foreign nature.

If the US Takes a True Isolationist Approach, Multiple Wars are Likely

China, Russia, and the Islamic nations are likely to take advantage of any pullback from the worldstage by an “Absent Superpower.”

The part of the world population that has been productive and inventive for so long is suddenly shriveling away, leaving most of the world field to Africa, China, and India. Is this right?:

now we’ve come to “the future” where there are fewer of us to service the debt, buy homes, buy cars, consume our way to prosperity…or pay the taxes to keep the social systems solvent. Basically, we are doing our best Wile E. Coyote impression…we’ve gone over the cliff but somehow haven’t realized it quite yet.

In Peter Zeihan’s two books, The Accidental Superpower and the recent release The Absent Superpower, the 50 tonne gorilla in the room that is being ignored by international media is thoroughly discussed.

The demographic and geopolitical shift taking place behind the scenes should be on the lips and minds of any thinking person — but the world media pretends it isn’t happening. Fake news keeps the rubes occupied.

Hope for the best, prepare for the worst. You had best learn to become very dangerous, very quickly.

Robert D. Kaplan on The Only Maritime Power

Without the US for ballast and stability, Asia lies naked before the Chinese marauder. Even an Eastern/Central Europe & MiddleEast – marauding Russia — due to its irrevocably worsening economic and demographic crises — needs the silent, invisible presence of the US as protection from China.

China is the most corrupt: 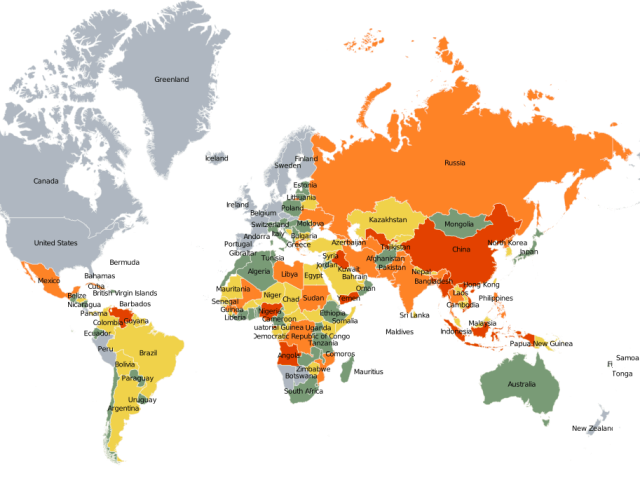