Morpheus to Neo (via)

The Mainstream Offers You Fantasy; The Reality is Much More Interesting

The corrupt scam begins to unfold

A nice summary of the climate controversy

It is believed by green energy advocates that if one throws enough erratic, intermittent, unpredictable, expensive, low quality energy at the power grid, that in the end society will be well supplied with ample, affordable, reliable, high quality electrical power. Perhaps one does not necessarily have to be a total imbecile to believe all that, but it certainly helps!

Germany is an industrial export-driven economy. Without abundant and reliable electric power of an affordable nature, Germany will die. Sadly, the government of Germany is abandoning the very foundations of German industrial income and jobs. Diving blind into a turbid pool of uncertain depth often results in total paralysis for those unwise enough to do so. It appears as if this will be Germany’s fate as well.

Germany’s heavy industry is reluctantly packing its bags and heading overseas where electric power is still abundant and affordable. The deeper the penetration of big wind and big solar into a nation’s energy supply, the greater the chances that the foundational industry of electric power will falter, resulting in disastrous and long-term, repeated loss of lives, property, and livelihood.

Germany is forced to rely on quantitative easing to maintain an illusion of economic vitality — at least in comparison to Italy, Greece, and Spain. But the relentless effects of energy suicide will undercut the green energy delusions of the reich.

Of power demand totaling 69.0 gigawatts (GW) at 3 pm on the 12th, for instance, just 0.7 GW was provided by solar energy, 1.0 by onshore wind power and 0.4 offshore. At noontime on the 14th of December, 70 GW were consumed, with 4 GW solar, 1 GW onshore and somewhat over 0.3 offshore wind. The Agora graphs make apparent that such wide-ranging doldrums may persist for several days.

You do not need to be a technician, an energy expert, or a scientist to perceive the underlying futility of this basic situation. You simply need common sense, shelving expectations and prognoses for a moment, while extrapolating the current result to future developments. __ https://stopthesethings.com/2017/01/20/will-germanys-winter-wind-solar-power-collapse-mean-the-end-of-the-energiewende/

Germany has not closed all its nuclear plants, not yet. With the crucial assistance of neighboring national power utilities still using nuclear/coal/hydro/gas, the dwindling number of German nuclear and fossil fuel plants are able to struggle through without creating utter disaster, so far. But the deeper the nation presses its wager, the higher the odds of complete catastrophe.

Energiewende will be the death of Germany 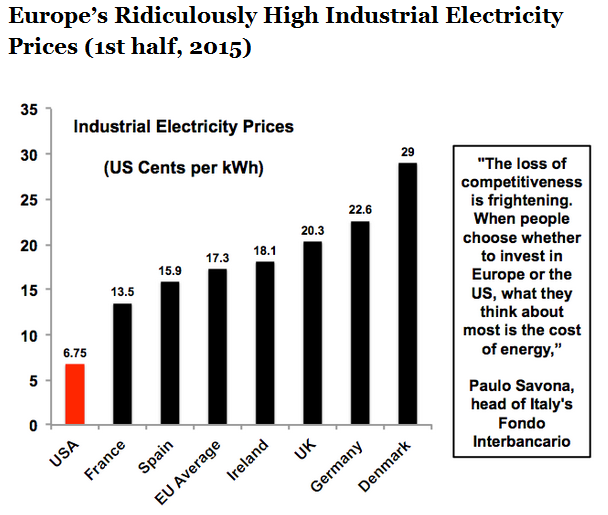 … one cannot simultaneously rely on massive amounts of wind and sunshine, dispense with nuclear power plants… , significantly lower the supply of fossil energy, and nevertheless tell people that electricity will definitely be available in the future. Exactly that, however, is what politics largely does almost every day. It is quite irresponsible to persuade citizens that from 2030 onwards only electrically-powered new cars may be allowed, as has recently been propagated in the highest political circles.

You can wish for a lot and always hope for a good outcome. But as important as wishes and hopes are, they are not yet solutions

The example of Energiewende once again demonstrates that the traditional political approaches of our democracies are ill-equipped to solve such complex problems. Consequently, they pursue what I have recently called symbolic politics: democracies do something that is supposed to point in the right direction without thinking it through and without even taking note of the system-related consequences. If it goes wrong, the political predecessors were guilty and nobody feels responsible.

That is why citizens need to remain vigilant and critical. You can wish for a lot and always hope for a good outcome. But as important as wishes and hopes are, they are not yet solutions. We likewise have to use our minds when we would prefer to turn them off because the conclusions are so depressing. __
Energy Post Weekly

If one is foolish enough to allow himself to be herded by the strident bullhorns of media, academia, foundations, thinktanks, and government, he and everyone he influences will pay the price for his inability to think rationally for himself. Bad science generates bad policy. Bad policy creates a dystopian future. Such was the future under the Clinton-Bush-Obama cabal of corruption. US voters bought the world a bit of time.

More — A revealing glimpse of the prevailing psychology inside the German mind:

Come to Germany and Rape Us!

Germany is laying down its women to be raped by migrants. Any country that will destroy its demographic future in this way is not above abandoning its industrial infrastructure to to the trite slogans of “green” idiocy.