Can a More Rational Polygamy Save the Civilised World?

Polygamy is already legal. But what we have now in modern nations is “irrational polygamy,” where large numbers of low IQ women are married to the welfare state. The state pays these low quality women to have children who are also of typically low quality, perpetuating this irrational form of state-centered polygamy over many generations, each generation less competent than the one before. 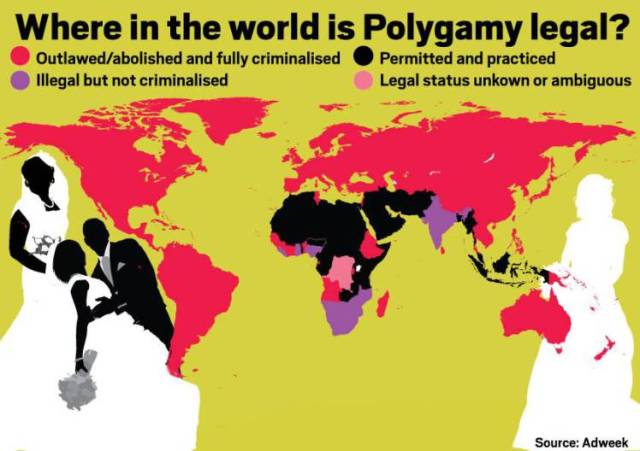 … 59 countries, comprising roughly 44 percent of the world’s total population, are currently not producing enough children to avoid population decline, and the phenomenon continues to spread. By 2045, according to the latest UN projections, the world’s fertility rate as a whole will have fallen below replacement levels. __ Global Baby Bust … Phil Longman in Foreign Affairs

Demographic collapse in the civilised world is twofold:

In “rational polygamy,” women are attracted to men capable of providing for more than one wife, emotionally, sexually, and financially. Such men are in high demand anyway, and their genetic and parenting capacity is largely wasted under the present system of mandated monogamy. If high quality men of large potency and competency were allowed to procreate and parent with multiple high quality partners, at least part of the modern dysgenic trend could be halted, or reversed.

Or, as they say in Africa:

‘If you have a choice of a guy who has 180 cows, lots of land and other wives, it might be better for you to marry him rather than a guy who has no wives, three cows and one acre,’ said anthropologist and study lead, Monique Borgerhoff Mulder. __ Polygamy in Africa Makes Better Children

The average man is capable of impregnating at least 20 women a month. But very few men are capable of caring for 20 women and their offspring. And that is really what polygamy (polygyny) is about: Fulfilling a sacred trust to one’s spouses, children, community, and humanity at large.

Polygamy involves marriage with more than one spouse.

Always Something to Do Around the House

Now that people of all conceivable sexual orientations are legally allowed to marry in many modern nations, it beggars belief that judicial systems in those nations continue to discriminate against polyamorous partnerships. Of course, leftists typically fail to think issues through clearly, and often suffer from hypocritical and inconsistent approaches to a wide range of practical policies.

Those who care about gays and lesbians being discriminated against cannot ignore whether those who would marry multiple partners, if they were allowed to do so, are also being treated unfairly. __ Three May Not Be a Crowd … via Volokh Conspiracy

More judges in future are likely to agree with Judge Waddoups that laws against polygamous unions are unconstitutional in the age of LBGT marriage.

Polygamy already exists. The choice is between “irrational polygamy,” where millions of low quality women are married to the welfare state, procreating illegitimate children for the state — and “rational polygamy” where multiple women will be allowed to choose to marry high quality, high potency, high competency men capable of taking care of them and their progeny.

The current system of irrational polygamy is clearly dysgenic in nature, leading to a progressively dysfunctional and incompetent society. A fairer system of rational polygamy would slow or reverse some dysgenic trends, and allow potent and comptent males to transfer their good genes and good habits to larger numbers of future generations.

Polygamy will exist, either way. It is clear, however, that the welfare state makes a horrible husband. In the US black community, for example, roughly 75% of black children are born illegitimate, many destined to perpetuate a multi-generational descent into crime and welfare dependency:

There is a large black underclass that is still mired in drugs, gang life, and lawlessness. Blacks are overrepresented among people who commit violent crimes and go to prison. There has been a sharp rise in the proportion of black children raised by their unmarried mothers. Unemployment, especially among inner-city young people, remains high. Too many blacks (for that matter, too many whites) have developed a long-term dependency on government welfare. __ James Q Wilson

Rational Polygamy Must Be Combined With Stringent Welfare Reform

It does no good to legalise polygamy if the welfare state continues to finance low quality procreation among  underachieving underclasses with high rates of violent crime. Such counter-productive financial support of multi-generational dysfunctionality should be nipped in the bud. Polygamists must be able to support their own lifestyle, and cannot be permitted to live on the public dole.

Legalising a more rational polygamy combined with stringent welfare reforms will open positive opportunities for more diverse forms of functional relationships that should help to reverse some of the troubling trends so prominent in the modern welfare states of Europe and the Anglosphere.

Rational polygamy will not save the world. Only Dangerous Children can do that.

This entry was posted in Demographics, Marriage, Polygamy, Sex and tagged Polygamy, sex. Bookmark the permalink.

2 Responses to Can a More Rational Polygamy Save the Civilised World?