A World Ripe for Disruption 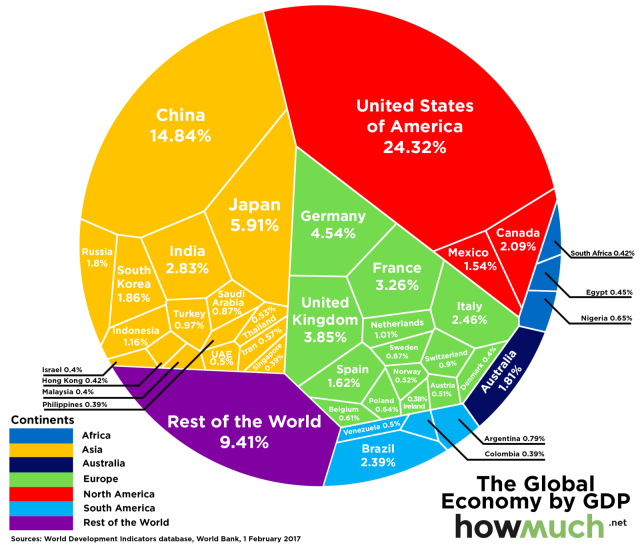 The global economy has been in a state of rapid ferment for several decades. Although the US has operated the world’s largest national economy for the past 127 years, some of the world’s other former economic giants are beginning to fade due to demographic collapse. And others, such as India and China, are hoping to challenge the US in the near future for the top spot in the rankings.

Much More is Happening than Raw Economic Outputs

In the world’s largest economy and sole superpower, a bloated and oversized government is heating to a boil. Trump advisor Steve Bannon is promising to pop the bubble of big government and its cronies, bit by bit, every single day. Brand new UN ambassador Nikki Haley is finally calling the corrupt consortium of international gangsters to account, and promising extra-close scrutiny of all future US funding of the crooked cabal on the Hudson.

The new US administration is putting a lot of effort into “draining the swamp,” on national and international levels. But US Treasury Secretary Mnuchin predicts that it will be the year 2018 before most of the growth dividends from these efforts will bloom.

US Energy Production is Already Surging

US hydrocarbon production is beginning to experience a new renaissance, led by US tight rock (shale) oil & gas. The impact of this US energy renaissance on global geopolitics will be huge and unpredictable.

Saudi Arabia’s price war inadvertently created a dream scenario for American innovation. What’s happening now is a leaner, meaner, greener set of technologies that is allowing shale to tackle what detractors rightly see as its greatest Achilles’ heel: high upfront production costs. Such tech advances comprise the bulk of shales recent price advantage. In 2012, before any of those technologies had been operationalized full-cycle costs were about $90/barrel. In November 2014, when the Saudi’s launched their price war, the full-cycle break-even cost across the shale patch was probably about $75 … by August 2015 that figure had plunged to $50 in the Big4 fields. As operators started to redesign wells with the entire lifecycle of production in mind, that per-barrel production cost for new wells dipped to the vicinity of $40 in November 2016. North American shale already is more cost-competitive than the global average. As these technologies continue to mature and play off on another, a price structure of around $25 sometime in 2019 seems within reach.

Your average well involves inputs from more than 100 companies from start to finish. With the technology that exists now, each well now likely can be relied upon to at least triple its long-term output compared to 2014 norms for on average less than a 50-percent increase in cost, with less surface infrastructure. __ Gavekal Capital blog via Valuewalk

Elon Musk’s SpaceX gets most of the attention, but a number of other US private space enterprises are developing ways to make the commercialising of outer space a viable enterprise. Bigelow Aerospace, for example, has devoted the past 16 years to developing safer, cheaper to launch, more affordable space habitats for orbit and for planetary surfaces.

For the last sixteen years Bigelow and his company, Bigelow Aerospace, have been advancing inflatable habitat technology. Inflatable technology lets you squeeze a housing unit into a small package, carry it by rocket to a space destination, then blow it up like a balloon. Since the spring of 2016, Bigelow, a real estate developer and founder of the Budget Suites of America hotel chain, has had an inflatable habitat acting as a spare room at the International Space Station 220 miles above your head and mine. And Bigelow’s been developing something far more ambitious—an inflatable Moon Base, that would use three of his 330-cubic-meter B330 modules. What’s more, Bigelow has been developing a landing vehicle to bring his modules gently down to the Moon’s surface.

Then there’s a wild card—Jeff Bezos. Bezos’ Blue Origin rockets already have a well-tested capacity to take off, land, then take off again. Which means that in the next few years Bezos’ rockets, too, could land cargoes and passengers on the Moon. __ How to Get to the Moon in 4 Years — to Stay

As NASA returns to its original mission and backs away from the climate apocalypse cult, prospects for human advancement into space suddenly improve.

Don’t forget stem cells. The promise of “stem cell rejuvenation” offers the possibility of a more vigorous and longer life. When combined with more efficient disposal of senescent cells, an ongoing rejuvenation of a person’s adult stem cells would boost cardiovascular fitness, cognition, strength, and a general youthfulness well into middle age and beyond.

Disruption in Manufacturing and Supply Chains

The 3D printing industry is rapidly emerging across many sections of industry and commerce With 3D printing, the boundaries between industries may begin to break down, as any company with advanced 3D expertise could move rapidly into almost any area of manufacturing and supply chain enterprise.

The development of polymer ink for 3D printing is becoming a multi-$billion industry and will continue to expand rapidly. And that is only a fragment of the 3D printing phenomenon. Metals printing, bioprinting, printing entire buildings – automobiles – boats etc. will lead to a profitable divergence across the 3D manufacturing field. And don’t forget home 3D printers for short-circuiting supply chains for the benefit of households.

A brief overview of the many innovations flowing out of Israeli ventures. Israel is emerging as the most innovative nation in the world, for its size.

The central economic goal of Donald Trump’s administration will be to boost U.S. economic growth. Steven Mnuchin, Trump’s nominee for treasury secretary, has said that the administration’s objective is to raise the rate of GDP growth to three to four percent, doubling the rate achieved over the last decade. This will be accomplished by establishing a globally competitive corporate tax rate, adopting a territorial corporate tax system, reducing excessive regulation, boosting domestic energy production, and introducing better trade policies.

The United States has the highest corporate tax rate of any country in the Organization for Economic Cooperation and Development. At 35 percent, the U.S. rate far exceeds the rates of the United Kingdom (20 percent), Germany (16 percent), Canada (15 percent), Ireland (13 percent), and many other countries. This high rate discourages investment, and reducing it will encourage it. The Trump administration plans to lower the corporate rate to 15 percent, eliminating the disadvantage for U.S. companies, making the United States a more attractive destination for investment, and creating jobs for American workers.

In addition to a high domestic corporate tax rate, the United States also imposes a 35 percent tax on repatriated foreign earnings (with a credit for any foreign taxes paid). This has led U.S. companies to locate their manufacturing operations abroad and to keep their foreign earnings abroad, as well, rather than bring them back to the United States. Few other countries have such a policy, and it is one reason why U.S. companies have parked an estimated $2.5 trillion overseas. __ https://www.foreignaffairs.com/articles/united-states/2017-02-13/trump-and-economy?

Get rid of the state-sponsored barriers to growth. Then watch how these common-sense incentive-minded policies turn rosy scenario into economic reality.

Changes in policy could easily result in a return of many $trillions of cash, invested into an economy where opportunity, productivity, and disruptive innovation can once again rule. Remember: Most jobs are created by startups within their first 5 years of existence. Obama killed US productivity, industrial innovation, and the startup culture. A few tweaks in the underlying rules and opportunities can bloom like a meadow in spring.

Some Disruptive Innovations May Not Be to Our Benefit

Even a utopia under “The AI of Everything” may not be everything we have hoped for:

Are You Man Enough to Stand Up to the Future of AI Robots and Self-Driving Taxi-Drones?

… in the A.I. era, machines [will be] doing all the thinking. Because, over the decades, [we’ll have] gradually given up our autonomy, step by step, allowing ourselves to be transformed into A.I.’s docile, fabulously pampered pets. As A.I. whisks us from place to place — visits to family members, art galleries and musical events — we will look out the windows, as unaware of its plans for us as a poodle on its way to the groomer’s. __ Liu Cixin

Developed nations have already allowed their educational systems to be corrupted and “dumbed down” to the point that for most students and recent graduates, the brain has become a vestigial organ. Self-driving cars are becoming a necessity for short attention span text and twitter addicts, who would otherwise continue wrecking their cars and disrupting the lives of innocents on the highways.

Large scale national and international violent clashes are likely as disruptive technologies create radical changes in the fortunes of various populations, ideological confederations, and economic cartels. And certainly it is widely said that periods of peace are merely temporary interludes, necessary to allow nations to prepare for war. Anyone who makes plans in ignorance of the certainty of the war to come, lives in a fools’ paradise.

Disruptive Innovation Will Flow from the Developed World

But the developed world will not be safe from the many aftershocks of this disruption. If human populations remain mired in stasis, and fail to choose an abundant and expansive future, a lefty-green dystopia of destroyed opportunity, insurmountable debt, and dysgenic decline becomes more likely over time.

In the dystopian scenario, as jobless numbers rise across the globe, our societies sink into prolonged turmoil. The world could be engulfed by endless conflicts between those who control the A.I. and the rest of us. The technocratic 10 percent could end up living in a gated community with armed robot guards. __ Liu Cixin

Ordinary people will never be shown the underlying reasons for the destruction of their comfortable existences. Propagandists from government, media, and academia will do everything possible to keep the public’s eyes off the reality of ruling class malfeasance.

Perhaps it is time for a revolution of competence and contrarians?

The Dangerous Child Phenomenon Represents one of the few Countertrends

The Dangerous Child Method is based upon the teaching of broad based skills and competencies from the earliest age. Dangerous Children are capable of supporting themselves financially in at least three different ways by the age of 18. They are likely to form the nuclei of more competent communities and societies that will grow up quietly to largely replace the foundering mainstream society. The long term goal is to build a divergent, abundant, expansive human future.

US President Trump cannot save the mainstream society, although his stopgap measures may well buy time for the competence movement. But even if Trump knew how, he will not have enough time to reverse the lefty-green onslaught of drone-like groupthinking corruption combined with a massive global dysgenic decline of intelligence and executive function.