Elusive Fusion Power: Our Greatest Challenge? It Will Not Invent Itself

We seek him here, we seek him there,
Those Frenchies seek him everywhere.
Is he in heaven? — Is he in hell?
That damned, elusive Pimpernel __ The Scarlet Pimpernel

Controlled nuclear fusion is like the Scarlet Pimpernel: damned elusive, and furiously sought by the French, among others. But the massively exorbitant effort to harness fusion that is located in France, looks ever more elusive by the year.

Perhaps what is needed is a more clever approach (or approaches).

Nuclear fusion is commonplace inside the core of stars. But down here on Earth, fusion is far more difficult to control where humans make their homes. But the quest is worth pursuing, given the quantities of energy involved.

The chart below displays a number of current and past approaches to earth-based nuclear fusion for electric power and heat. Nuclear fusion is such a tantalizing prospect because of its potential to revolutionise human existence, providing unlimited heat and power into the indefinite future. Fusion is likely to be the primary power source for future human societies on Earth and in outer space. 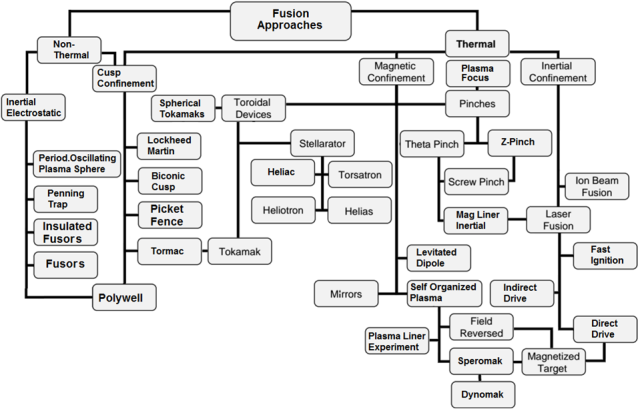 Sure many of these ideas will fail, but if one hits net power, it will fundamentally change human civilization, forever. Fusion is coming along much faster than folks realize. It also has the potential to make a much wider and deeper impact on human civilization than most appreciate.

Look at the comparative energy densities of various forms of energy which are potentially available to humans, and notice the advantage that nuclear reactions provide. If humans intend to build a decent future for their progeny, they will take these things into account when planning their energy research budgets.

A combination of nuclear fusion and advanced nuclear fission would provide humans with as much heat and power as they might conceivably need. The small amount of hydrocarbon power that might be needed for niche uses would be entirely unobjectionable to anyone with a working brain.

Clean, unlimited, affordable energy opens the door to an expansive and abundant human future. If, on the other hand, human societies follow the ruinous energy prescriptions of Bernie Sanders, Barack Obama, Angela Merkel, and the other usual suspects, their descendants can look forward to living in caves, in ever dwindling and sickeningly deprived generations, over time. Echoes of Kurt Vonnegut’s Galapagos.

Fusion in a quantum femtosecond

12 Responses to Elusive Fusion Power: Our Greatest Challenge? It Will Not Invent Itself