College: Are You Just Wasting Your Time? 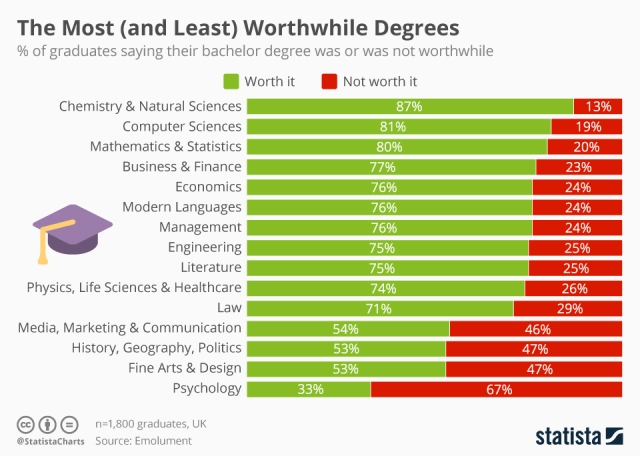 Not All Degrees are Created Equal

Some degrees allow students to pay back their college loans rather quickly. But more than half of modern four year degrees leave graduates competent to do little more than flip burgers, wait tables, or drive a shuttle van. Very few youth are prepared to choose a path through the higher ed labyrinth. As a result, hundreds of $billions are wasted in the US on non-performing degrees. The growing mountain of student debt that results from this societal ineptitude and government/university/bank collusion to defraud, is staggering.

… tuition is “on a runaway train” because the federal government is too eager to underwrite student loans and universities have no incentive to keep tuition affordable.

“What they’re trying to do is ask taxpayers to subsidize more kids to go to college, when they may not in fact need to,” he said. __ Source

As a result of college debt — particularly money owed for worthless degrees — contemporary youth are more likely to postpone their lives for lack of funds, sometimes indefinitely.

The standard repayment plan for federal student loans puts borrowers on a 10-year track to pay off their debt, but research has shown the average bachelor’s degree holder takes 21 years to pay off his or her loans. __ Source

There are Alternatives to this Treadmill to Nowhere

When young people are shunted through a mass production educational system that disregards the student’s needs and misjudges real-world demand, the resulting waste of human potential is incalculable. Alternatives to the university system abound, which would better suit roughly 75% of young people who are realistically unsuited for college — or have no interest in higher education.

Encouraging students to consider the trades and parents to give their children the money they would spend on a four-year college degree to put a down payment on a house might be a better use of finite economic resources. The alternative of forcing the proverbial square peg into a round hole will condemn another generation to student debt slavery forcing them to put off buying a home or getting married.

… The root of the problem is intervention by the federal government in providing student loans. Since 1965 when President Johnson signed the Higher Education Act tuition, room, and board has increased from $1,105 per year to $18,943 in 2014–2015. This is an increase of 1,714 percent in 50 years. In addition, the Higher Education Act of 1965 created loans which are made by private institutions yet guaranteed by the federal government and capped at 6.8 percent. In case of default on the loans, the federal government — that is, the taxpayers — pick up the tab in order for these lenders to recover 95 cents on every dollar lent. Loaning these funds at below market interest rates and with the federal government backing up these risky loans has led to massive malinvestment as the percentage of high-school graduates enrolled in some form of higher education has increased from 10 percent before World War II to 70 percent by the 1990s. __ Source

Kids go to college these days to learn to binge, fornicate, and receive an indoctrination in lifelong incompetence.

The above aphorism is true for many, but not for all college students. For some, getting a four year degree is worthwhile, and opens the way to a lifetime of real world learning, living, and accomplishment. But for far too many, the college experience becomes a gateway to indebtedness and the first of many failed expectations.

Most children are indoctrinated by the triumvirate of corruption: mass media, government, and the school systems. Today’s parents tend to hand over control of their children to society — from daycare to university. A weakening and eventual breakdown of society is the clear result.

More articles on alternatives to college on The Dangerous Child blog

Remember: Dangerous Children master at least three ways of supporting themselves financially by the age of 18. At that point, if they wish to pay their way through college, they can afford it. They might also receive the equivalent of several advanced degrees in science, engineering, information technology, or other substantial fields via online training, at a very low cost. But more likely, they will invest and start a number of businesses and build an independent income base at a relatively early age. Most will likely then go on to network with others like themselves, in order to build a more abundant and expansive human future.

The choice is clear: Continue allowing government, big education, and big finance to destroy the futures of the young — or begin instilling competence and mastery into children from an early age and let the wise and skillful children and youth take control of their own futures from a position of strength.

1 Response to College: Are You Just Wasting Your Time?