Bernie Sanders’ admiration for revolutionary socialism goes back several decades. In 1985 Sanders filmed an interview in which he expressed admiration for Fidel Castro, and the Sandinistas in Nicaragua. More recently, he has admired the system of Hugo Chavez’ Venezuela, and other Latin American socialist paradises — all of which have failed or are failing badly. 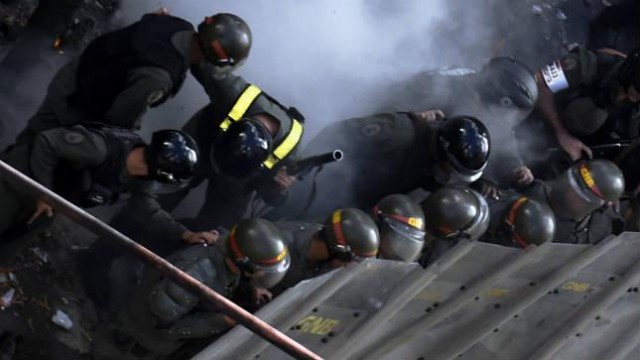 Venezuela is a Real Riot
Source

Venezuela is, however, a true global leader in violence. Shootings, stabbings, grenades, bombs, tear gas, kidnappings, gang violence, extortion; you name it, we’ve got it.

Senior Venezuelan officials traffic drugs and weapons throughout the Americas with bedfellows Iran and Hezbollah. While at a lower level, regime cronies and corrupt law enforcement agencies serve as local arms dealers, and soldiers supplement their wages through the sale of all sorts of weaponry and military materiel. It is therefore no surprise when criminal bands use grenades and automatic rifles to assert their authority, and exert revenge.

And why not? They can get away with it. Impunity is the name of the game in Venezuela. Over 90 percent of cases are never tried. And when impunity and injustice pervade throughout a quasi-anarchical society, the people inevitably take the law into their own hands. In recent years there has been a distinct rise in street trials, public lynching, and revenge killings involving blood and guts worthy of an episode of Game of Thrones, not a modern country. __ The Hill

This is Bernie Sanders’ workers’ paradise in the flesh. Like the failed state of Cuba, Venezuela illustrates the impoverished ideology of punishing success and rewarding corruption.

At Havana’s state-run retail hubs, reports Nick Miroff, “Customers with long shopping lists face no fewer than seven places to stand in line. One for butter. Another for cooking oil. A third for toothpaste. And so on.” The caption to a dismal accompanying photograph shows people waiting “hours for their government ration of chicken.”

This is what happens when central planners think they can allocate economic resources better than the unguided hand of individual free choice. Like any good scientific experiment, this one is easily replicated, and has been time and again. See, for example, Venezuela, which has now run out of toilet paper, tampons, and other basic necessities because some people there think they should make all the choices for other people. And yet for many, the repeated lesson still has not sunk in. In an unintentionally hilarious essay about Cuba not so long ago, one writer noted that “the people are hungry here. There are severe food shortages. I do not understand why a tropical island would lack fruits and vegetables . . . and my only assumption is that maybe they have to export it all.”

The cognitive dissonance when socialist theory interacts with the real world, is staggering. But if someone has never learned to appreciate reality even when it is punching them in the nose, he may not be aware of why he is feeling so dizzy.

One can understand this obstinate obtuseness in the very young. Socialism is often taught to high school and college students as the embodiment of good intentions, compassion, and “doing the right thing.” The sad, real world results wherever socialism is seriously implemented, are omitted from the history lessons, so as not to confuse the little biters.

But for someone to grow to the ripe old age of 75 and still be spouting the same gibberish, as if he had not been refuted by the real world every time he turned around, that requires a deep corruption and dishonesty of the soul which goes far deeper than your average judge or civil servant taking a bribe.

Bernie Sanders and the $15 Minimum Wage

Bernie Sanders publicly supports a national increase in the US minimum wage to $15 an hour.

If you are a manufacturer of robots, it makes sense to promote a $15 minimum wage. Robot sales would increase exponentially, and thousands of new uses for robots would be found inside every industry which employs minimum wage workers.

But unfortunately, large numbers of low wage workers would lose their jobs, tens of thousands of businesses would fail, and low-skilled workers of every age — but especially the young and late middle-aged — would find it impossible to get paying work outside of the black market and criminal enterprises.

News media coverage and academic teachings have failed to reveal to young people the inevitable results that come when a nation follows “the socialist way.” And so a new generation has grown up ignorant of the 100 million + deaths in the 20th century that followed naturally after the adoption of communism [PDF document] in China, Russia, Cambodia, Vietnam. Far more than died from all of the wars in Europe and Asia, from the genocide of Hitler — more were killed by communist policies, under the banner of creating a socialist utopia. And apparently, socialism is not yet satisfied with past blood-lettings. The followers of Bernie Sanders will not be content with beating and pepper-spraying old people who support a form of populism which socialists don’t like.

Privileged young people follow Sanders like sheep, not understanding the movement’s ideological underpinnings and the world toward which that ideology is leading them.

A mild fact-checking of some of Sanders’ claims

Lefty-Greens Would Like to See 90% of Humans Die Off

The green leftist movement, the Voluntary Human Extinction Movement, seems innocent enough. Their strategy is to stop all human breeding so that humans can die off, and allow the Earth’s natural ecology to recover to its pre-human pristine state.

Another leftist approach to generating a mass human die-off sounds slightly more realistic, and ominous. The scientists referred to in the excerpt below want to concoct a deadly virus to do the job.

Professor Pianka said the Earth as we know it will not survive without drastic measures. Then, and without presenting any data to justify this number, he asserted that the only feasible solution to saving the Earth is to reduce the population to 10 percent of the present number.

He then showed solutions for reducing the world’s population in the form of a slide depicting the Four Horsemen of the Apocalypse. War and famine would not do, he explained. Instead, disease offered the most efficient and fastest way to kill the billions that must soon die if the population crisis is to be solved.

Pianka then displayed a slide showing rows of human skulls, one of which had red lights flashing from its eye sockets.

AIDS is not an efficient killer, he explained, because it is too slow. His favorite candidate for eliminating 90 percent of the world’s population is airborne Ebola (Ebola Reston), because it is both highly lethal and it kills in days, instead of years. However, Professor Pianka did not mention that Ebola victims die a slow and torturous death as the virus initiates a cascade of biological calamities inside the victim that eventually liquefy the internal organs.

After praising the Ebola virus for its efficiency at killing, Pianka paused, leaned over the lectern, looked at us and carefully said, “We’ve got airborne 90 percent mortality in humans. Killing humans. Think about that.”
__ Ron Bailey

Apologists for Pianka and for those who gave him a standing ovation, protest that Pianka was “only kidding.” But Professor Pianka is not the only green leftist to go on record longing for a great human dieoff of 90% of Earth’s population or more.

If All the World Were Socialist, The Dieoff Would Take Care of Itself

The human population is admittedly too large for its “carrying capacity,” if all the world were socialist. The same is true for a world where the average human population IQ is 75, as in black Africa. In the socialist case, human enterprise and innovation would be intentionally hamstrung and electively lobotomised. In the case of low global average IQ, humans could simply not produce enough scientists, engineers, technologists, clever managers, biomedical providers and researchers, and all the other bright people who do the work for the less gifted 90%.

The dieoff is always there in the background, just waiting for “Atlas to Shrug,” or for the smart fraction to call it a day. A Bernie Sanders-style government would go a long way toward bringing such a thing about.

More: A few reasons why leftists have increasingly taken on the stench of dog shite recently

This entry was posted in Government, Politics and tagged economics, Political Philosophy. Bookmark the permalink.