BASIS.ed students consistently rank among the top in the world in critical thinking and problem solving in math, reading, and science. A BASIS.ed education is a blend of the rigorous standards seen around the world plus the ingenuity and creativity so often associated with American education.

American high schools are politically protected from meaningful reform by ideologues within the US Department of Education and by other ideologues in US university schools of education, thinktanks, and nonprofit foundations. But real-world market forces have brought about certain experiments in US secondary education which demonstrate that an American high school education need not be third-rate. The BASIS charter school system is one such experiment that is proving successful.

In 2015, six Basis charter schools met the criteria that permitted their students to take the PISA test. The Basis pupils scored higher than students in Shanghai, Korea, Germany or Singapore, not to mention U.S. private and public schools. In math, the average Basis student performs better than the top 10 percent of U.S. public schoolers.

Basis students also stand out when it comes to the one U.S. test that is more closely tethered to reality, the College Board’s challenging Advanced Placement exam, designed to measure whether students have so mastered a subject that colleges will give them academic credit for it.

BASIS also has three schools in the top 10 of the U.S. News list of best high schools, which is based on test scores and graduation rates.

Shocked at how abysmally bad many American high schools actually were, Czech immigrant Olga Block was moved to found BASIS Charter Schools along with her husband Michael. By designing and founding Basic charter schools, Block and her co-founders meant to give American high school students “a basis” for competency within today’s STEM-oriented employment and business worlds. 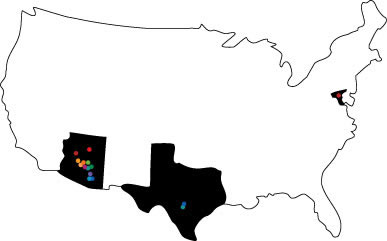 Locations for BASIS Charter Schools
Wikipedia
They took the BASIS.ed network from one charter school in 1998 to 19 charter schools in Arizona, Texas and Washington D.C., as well as three independent schools in San Jose; Brooklyn, New York; and McLean, Virginia, and an international school in Shenzhen, China. Source

Founded in Arizona almost two decades ago, this network of publicly financed charters has grown to number 21 in the U.S. Basis Schools admit students on a first-come, first-served basis or, when demand is high, by lottery, meaning that not all the kids are born top performers. __ Amity Schlaes

High schools have become assembly line factories of dumbing down to the lowest common denominator.  And that lowest denominator is too low to support a modern high tech society for very long.

Children Should Learn to Teach Themselves at an Early Age

The best learning is “self-taught” learning, and the skills of self-teaching can be taught very early. They can be mastered between the ages of 7 and 10 for most children. But not all parents can supervise a home “unschooling” for their high school aged children.

For parents of Dangerous Children who send their children to public or conventional private schools, such schooling often serves as “day care” supervision rather than as a meaningful education. The parent still has to make sure the child learns — but in a more compressed after-school and evening time framework. If the child has learned “self-teaching” from parents, he should be able to compensate for the flakiness and ideological bias of most public and private education.

But wouldn’t it be better if the schools themselves actually served to prepare students to face at least some of the challenges the youth will face in the future? Truly, as long as the child will be spending time there anyway, why not make that time profitable at least in part?

The US public educational system has been dumbed down and corrupted over several decades for many reasons, most of them of a political nature. It is good to know that at least some of the decline can be “rolled back” for at least a small percentage of students.

But on the Whole, the Best Approach for Dangerous Children is Home Self-Taught Learning

Homeschool students score above average on achievement tests regardless of their parents’ level of formal education or their family’s household income.
__ NHERI

Among homeschooling methods, The Robinson Curriculum is one of the shining stars.

The Robinson Curriculum is specially designed to prepare students for the SAT – a standardized nationwide test administered by the College Board (not to be mistaken with the SAT Achievement test which does not give you any credit). The Saxon Math and the RC Vocabulary section do an excellent job for SAT prep. For further credit they can take the Adanced Placement Exams for the college they are attending in order to test out of credit courses. This reduces the time and money required to get their degree. 3 of the Robinson children have done all this with great results. They only need a GED if they are going into something that does not require college but does need a “High School” diploma. A transcript generally does you no good. It is the SAT scores that matter. Any other paper is not important except in unusual cases.

Self-teaching is an integral part of the Robinson Curriculum. In fact, teaching the child to teach himself — from the earliest ages — is a key part to overall life success. This is true whether you are raising a Dangerous Child or a more conventional superior child.

Dangerous Child training is about far more than success in conventional schooling or conventional careers, of course. But when so many cultural institutions — including schools — are so terribly misguided and mismanaged, conventional success can seem a great victory to most of us.

The fact that there is so much more to be mastered and attained should be a powerful impetus for grander achievement and success. Dangerous Child training is about packing that “will to mastery” inside the child from his earliest moments of consciousness — and before. It is that “internal driving force” that will propel the Dangerous Child to embark on a lifetime of mastery and discovery.

Author Mark Twain suggested that people should not let their schooling get in the way of their education. That distinction between “schooling” and “education” is crucial for lifelong success. Schooling is only a small part of a person’s education. Still, whatever time is to be spent on schooling, should be spent profitably.

Olga earned her engineering degree from the Prague Economics University and worked on her PhD in economics at Cornell University. She was an associate dean at Charles University in Prague.

They both served as consultants for various think tanks.

They took the BASIS.ed network from one charter school in 1998 to 19 charter schools in Arizona, Texas and Washington D.C., as well as three independent schools in San Jose; Brooklyn, New York; and McLean, Virginia, and an international school in Shenzhen, China.

Michael said his secret for student success is quality teachers.

“The secret sauce really is putting teachers in the classrooms that know their stuff,” he told me when many of his BASIS schools topped our recent high school ranking based on SAT test scores. “That really means finding (teachers) who have degrees or master’s degrees or even PhDs in their subject area and not necessarily having been trained in pedagogy, which would allow you to be certified.”

He said it’s difficult to teach someone who is certified, but may not have a deep understanding of the subject matter, he said.

“It’s easier to teach someone who knows their subject how to teach,” he said. “That’s always been our approach.” __ http://www.bizjournals.com/phoenix/blog/business/2015/10/power-couple-michael-and-olga-block-take-education.html

Expert human teachers who know how to teach are valuable assets. Mainstream schools from K thru University often discard such persons, if they lack the proper political beliefs and connections. Alternative educational enterprises such as BASIS should be on a constant lookout for such high quality but not-politically correct discards from the mainstream system.

Note: The above article was adapted from an earlier posting on The Dangerous Child blog.

When educational approaches similar to BASIS move to the online arena, homeschoolers and unschoolers will be provided a useful tool.