Africa Unplugged
A Darkness That Abides
https://www.masterresource.org/ via

When President Macron of France suggested that black Africa has “civilisational problems,” he was immediately attacked by the usual suspects of the politically correct mindset. But Macron was merely saying in a polite way what most intelligent observers have known for decades now: Africa is a bloody disaster, and is unlikely to get better in the foreseeable future.

… the reality is that in far too many of [black African] countries we see the same problems over and over: mass poverty, gross inequality, endemic corruption, weak institutions, generally inefficient and insensitive governance, and overpopulation in relation to available resources.

Defensiveness and denial are not helping the hundreds of millions of impoverished Africans living in want, insecurity, and fear. At best, this kind of attitude allows Africa’s middle-class intellectuals and privileged classes to avoid the public airing of uncomfortable and sometimes embarrassing truths about the continent where they live. __ Remi Adekoya in Foreign Policy

Nothing Seems to Help

Foreign Aid to Africa is a Disaster

To date, the continent has received well over $600 billion in outside assistance. World Bank data show that a majority of African countries’ government spending comes directly from foreign aid. Yet much of Africa remains impoverished, and rampant corruption continues.

I his 2013 book Doing Bad by Doing Good, the George Mason University economist Christopher Coyne explains why measures intended to alleviate suffering often go so wrong… In [economist Dambisa Moyo‘s] 2009 book Dead Aid: Why Aid Is Not Working and How There Is a Better Way to Help Africa, the Zambian-born economist characterizes foreign aid to Africa as an “unmitigated economic, political, and humanitarian disaster” that has actually made the continent poorer.

… The problems caused by poverty and natural disasters are enormous, but aid’s track record suggests that it too often only makes matters worse. __ Foreign Aid is a Failure

Neither are ordinary black Africans receiving much benefit from international trade deals from China, Europe, or Anglospheric countries. Profits from oil and mineral wealth are skimmed by corrupt leaders and their associates, leaving most black Africans to live in perpetual poverty. Impressive infrastructure projects such as new railways, high rises, electrical generating stations, and so on, are typically left to decay and collapse for lack of routine care and maintenance.

All along the way, wreckage was strewn beside the tracks—railway cars hauled from where they’d derailed or broken down, and left to decay like great, dead beasts.

As we looked out at these rusting carcasses, my cabinmates began talking about the railroad, and what it said about their societies. “This is a good train,” said Isaac, with a trace of bitterness, “but like any piece of equipment, it needs maintenance.” Daniel Simwinga, a voluble, Bible-toting Zambian, responded, “Everyone knows you can’t keep getting milk from a cow without feeding it grass.” (Daniel was bringing a shipment of auto parts and other goods south. As a commercial trader, he rides the Tazara as often as twice a month, and is well versed in its shortcomings.)

“As soon as we have problems, we ask someone else to take care of them for us,” Isaac continued. “We ask the Europeans. We ask the Americans. We ask the Chinese. We will run this train into the ground, and then we will tell the Chinese we need another one. This is not development.” I thought of the wreckage by the tracks. In China, there is no such thing as metallic waste. Armies of migrant workers scour the countryside with hammers and chisels, collecting and selling every scrap to the insatiable smelters that feed the country’s industries. Here, by contrast, was a land without industry.

The World Bank and the United Nations did surveys for a Tazara-like line in the early 1960s, and both concluded that such a railway would be neither economically feasible nor sustainable. But China built the line, between 1970 and 1975, at the behest of two African leaders: Julius Kambarage Nyerere, the first president of Tanzania, who wanted to open up the remote south of his country and bolster his pan-African credentials; and President Kenneth Kaunda of Zambia, whose landlocked country was seeking an alternative to the trade routes south through white-ruled Rhodesia.

Within a decade, the line was suffering from repeated breakdowns, landslides, and management failures. Planners had envisioned running 17 trains a day, but by 1978 there were only two. __TheAtlantic

More on the failure of maintenance in Africa

Europe is the current recipient of Africa’s dysfunctional human overflow. Rape and violence are becoming more common in previously safe and sedate communities in Germany, Sweden, France, and many other European nations. Since Europe is so easily accessible from Africa, we should expect to see rising rates in Europe of the same kinds of problems so commonly seen inside black Africa itself. And we do.

“The fault, dear Brutus, is not in our stars, but in ourselves.”
― William Shakespeare, Julius Caesar

Shakespeare might have said the same thing about black Africa, in explanation for the dark continent’s perpetual failure. Politically correct excuses for Africa tell us more about the slavish dogmatic inanity of today’s babbling classes, than about the reality of root causes.

IQ is Not the Whole Story

One must expect to see both genetic and environmental underpinnings of the widespread dysfunction and misery that plague the dark continent. Disease, poverty, corruption, and violence are both causes and effects of suboptimal genetics. “Genetic load” has become a burden on the older populations of man. In this context, it is no wonder that foreign aid has such a deleterious effect on the demographics of Africa — in this case contributing to a dysfunctional overpopulation.

Until Africans Are Allowed to Find Their Own Level . . .

Consider any of the critical infrastructures:

Africa has abundant riches of oil, precious metals, diamonds, useful minerals, uranium, and a massive potential for global agricultural production and trade. But Africans have been generally unable to manage most of this economic trade and activity themselves, to the benefit of general populations. Wealth is seized by those in power, while the people live on a few dollars a day. Foreign aide and foreign trade only facilitate this ongoing mismanagement.

It is clear that a new and more sustainable type of infrastructure must be developed for Africans, which Africans themselves are capable of building, maintaining, and operating. Such a sustainable “African Infrastructure” would not support the type of population explosions currently taking place in so many African cities and nations. But until such a thing becomes a reality, keeping African nations from destroying themselves will remain the geopolitical equivalent of making water run uphill.

Europe lies in the direct path of destruction. 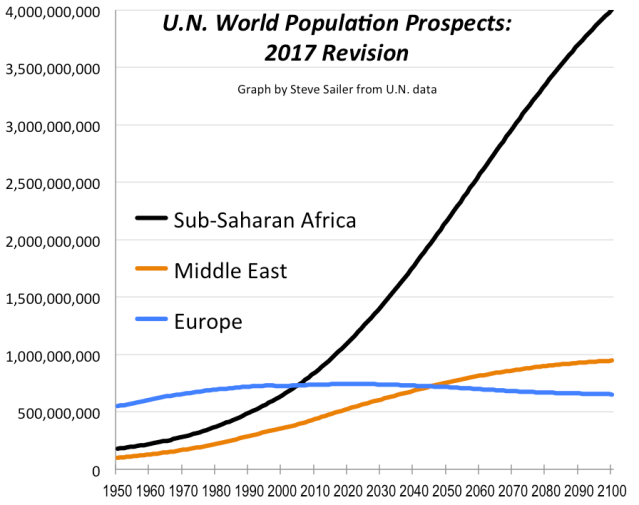 Why is Kenya spending a $billion on elections?

5 Responses to Africa’s “Complex Transition” Into the Modern World