As Much as 2 Trillion Barrels of Recoverable Oil in Texas, N.M.

In the Permian Basin alone, the southwestern US may eventually be found to contain as much as 2 trillion barrels of economically recoverable oil.

“The research we’ve done indicates that we have at least half a trillion barrels in the Permian at reasonable economics, and it could be as high as 2 trillion barrels. That is, as a practical matter, an infinite amount of resource, and it is something that has huge geopolitical consequence for the United States, in a very good way. It has a huge consequence in terms of GDP, and right now it is creating an American energy global ascendancy.” __ Allen Gilmer quoted in Forbes

Oil is Not the Fuel of the Far Future

Oil is the transportation fuel of today and the near to intermediate future. Over the coming decades, transportation will rely more and more on vehicles powered by natural gas and electricity. But between now and then, the world is going to need a lot of oil (and gas). And 2 trillion barrels of oil — in the Permian alone — is a lot of oil.

China seems to understand the advantages of nuclear power, and has set aside $78 billion to construct 35 new reactors over the next 4 years! (Source) As nuclear engineers design and build newer and better nuclear reactors, eventually new generations of politicians in the west will come to understand that advanced nuclear power is the future of energy.

… next-gen reactors are more or less impregnable to the weaknesses of their predecessors.

… nuclear reactors would produce 90% of their rated energy capacities at all times compared to solar/wind, which only provides 20%, a figure that is still subject to fluctuations due to climate and weather. Then there’s the issue of compatibility. For generated power to reach the end consumer, it has to be transmitted, and while nuclear power plants connect seamlessly to already existent power grids, solar and wind farms require converters to bridge with the grid in most instances. The cost implications of this and other significant modifications like the implementation of smarter grids to facilitate redundancy make nuclear power more scalable and cost-efficient. __ Alexandro Pando

Consider then the absurdity of economic, energy, and social policies enacted by Germany’s Merkel or California’s Brown, which cut at their jurisdictions’ ability to function as free and prosperous marketplaces of goods, services, and ideas. It is no accident that energy prices are skyrocketing in such places, and that the risks of power grid brownouts and blackouts are rising concomitantly.

Australia’s ongoing power crisis is of its own making, thanks to foolish political decisions by politicians and bureaucrats. Australia has plenty of uranium, coal, gas, and other reliable sources of energy and does not need to resort to this suicidal foolishness.

There is certainly no shortage of idiotic government officials who seem willing to destroy their societies for the sake of corruption and/or dysfunctional ideology.

Note: It’s one thing to be like South Africa and have dangerous shortages of electric power. The average IQ of South Africans is around 72, which does not provide for very many competent engineers, scientists, or technicians. When South Australia — with an average IQ of around 100 — begins having some of the same problems with electric power supplies as South Africa, you know that someone with an IQ of 120 is behaving exactly like someone with an IQ of 80. And that is a big problem. 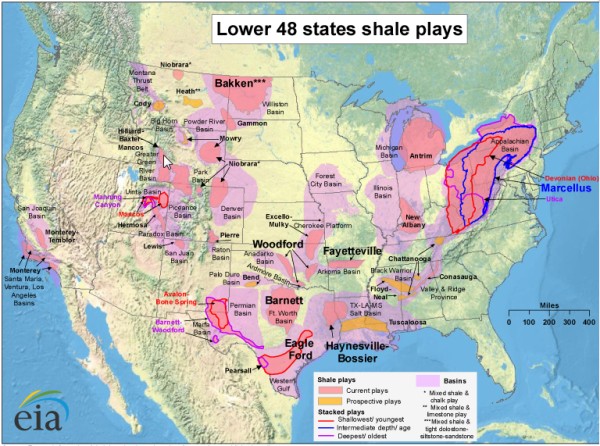 The video below looks at some of the effects of the shale revolution:

6 Responses to As Much as 2 Trillion Barrels of Recoverable Oil in Texas, N.M.