A recent study published in the journal “Intelligence” points out the tendency of American Mensa members to suffer more frequently from mood disorders and other psychological and physiological conditions. These differences are based upon the results of an internet questionnaire filled out voluntarily by a self-selected subset of the members of American Mensa. The researchers were looking for possible “overexcitabilities in various domains that may predispose [persons with high intellectual capacity] to certain psychological disorders as well as physiological conditions involving elevated sensory, and altered immune and inflammatory responses .”

The authors of the paper suggest a possible mechanism which may explain some of the differences in the prevalence of these conditions in high IQ and in normal populations:

You can see in the flow chart above and the graph below that the spectrum of reported differences spans both psychological and immunological domains. 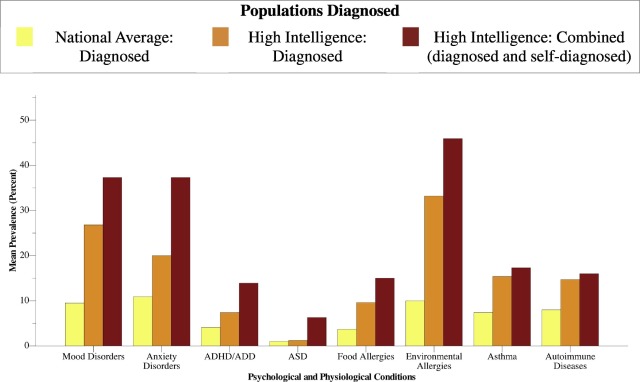 What Does This Mean?

Since high intelligence has been widely correlated with high levels of health and “system integrity” in previous research, the findings of the study above should be looked at critically. Any study that is based upon survey data should certainly be scrutinised very carefully. In the study above, results are based upon voluntary responses to an invitation to participate in an online questionnaire. In other words, the study left itself wide open to severe selection bias from the onset — before any collection of data whatsoever.

Neurotic Mensa members with time on their hands seem far more likely to bother with this type of survey than do persons who are busy with their lives, putting their high intelligence to more productive use. So put a check mark next to the box “self-selection bias.”

Another large problem with this study is the possible confounding of “high intelligence” with “high sensitivity.” Consider the personality trait “sensory processing sensitivity.” Elaine Aron‘s book “The Highly Sensitive Person,” brought significant public attention to this trait and its consequences in individuals. According to Aron, there is no clear correlation between “high sensitivity” and “high IQ,” nor is there any demonstrable connection between sensitivity and “giftedness.” Keep that in mind when considering this quote:

… The world causes you pain – from events, to poor architectural design, to harsh language and careless actions.

People tend to say you think too much, are too intense or are too “heavy”, that you should “lighten up”.

In fact, your intensity is an indicator of how truly alive you are. You have not ever been asleep to the world around you – though sometimes that might have been an appealing idea. __ Life Coach Jessica Thayer

It is likely that “high sensitivity” is a heritable trait which often appears alongside the trait of creativity or high intelligence. But these traits are different, and not correlated highly enough to be considered strongly associated, according to psychologist, author, and speaker Elaine Aron — a very sensitive and intelligent person with whom Al Fin has conversed at length.

When passing down from the trees, across the savannah, and on to the caves and huts of the middle east, Europe, and beyond, those migrating humans who were more aware of their environments were more likely to live to procreate and raise offspring to viability. High sensitivity would also likely be associated with higher levels of anxiety and depression — particularly in the modern world where entire industries (media, advertising, etc.) and agencies of government thrive on creating “false alarms” and “crying wolf” scenarios.

Something else which is obvious to anyone who has looked into this phenomenon, is that Mensa members are not representative of the high IQ population in general. A better subset of highly intelligent people would be participants in the Study of Mathematically Precocious Youth, or another equivalent program in North America or Europe. Such studies do a much better job of vetting the actual IQ of participants. Even better, these participants are even farther out on the right end of the IQ normal curve than most Mensa members, suggesting that any real effects would be even more noticeable than in the Mensa responders.

The overwhelming majority of prior studies looking at associations between IQ levels and levels of health, have found positive correlations between high IQ, longevity, and positive health. While it is possible for the authors of the above study to take questionable survey data and create a large number of potentially plausible reasons for their statistical findings, it is also easy for them to go astray when their study fails to account adequately for potential biases and confounders.

For now, this study should be seen as a flawed outlier that requires a more carefully thought out research design, if it is to be made duplicable by other researchers.

A more rigorous approach to this question:

Cognitive functioning is positively associated with greater longevity and less physical and psychiatric morbidity, and negatively associated with many quantitative disease risk factors and indices.1 Some specific associations between cognitive functions and health appear to arise because an illness has lowered prior levels of cognitive function.2, 3 For others, the direction of causation appears to be the reverse: there are many examples of associations between lower cognitive functions in youth, even childhood, and higher risk of later mental and physical illness and earlier death.4, 5, 6, 7, 8 In some cases, it is not clear whether illness affects cognitive functioning or vice versa, or whether both are influenced by some common factors. Many examples of these phenotypic and cognitive–illness associations are shown in Supplementary Table 1. Overall, the causes of these cognitive–health associations remain unknown and warrant further investigation. It is also well recognized that lower educational attainment is associated with adverse health outcomes,9 and educational attainment has been used as a successful proxy for cognitive ability in genetic research.10, 11 A study that included three cohorts of twins indicated that the association between higher cognitive function and increased lifespan was mostly owing to common genetic effects.12 ___ https://www.nature.com/articles/mp2015225

The research study quoted above was published in “Molecular Psychiatry,” and utilised sophisticated statistical analysis of genetic techniques using genetic and cognitive data from the UK Biobank.

As the advanced nations of the world develop more and more sophisticated technologies and infrastructures, the advantages of high levels of intelligence should be clear. Any potential disadvantages of high intelligence should be considered in a careful and sober manner, without undue bias or preferential outcomes. All research studies require careful analysis, criticism, and duplication.

Some of the contradictory findings of the Karpinski study might be explained by looking at Autism Spectrum Disorder as a confounder. At the high functioning end of ASD one often finds high IQ alongside mood disorders and anxiety disorders.

It should also be assumed, based on observation, that a finite but significant subset of Mensa members feel some insecurity (anxiety) about their personal competence, else they would have never pursued Mensa membership in the first place.

This entry was posted in Cognition, IQ and tagged evolution of human intelligence. Bookmark the permalink.

2 Responses to A World More Suitable for Stupid People?