Thanks to strict gun control laws, the ability of the average Brazilian to defend himself from more bloody-minded countrymen is limited. By absolute numbers of homicides, Brazil leads all other nations. 60,000 Brazilians were sent to early graves by murderous compatriots last year. 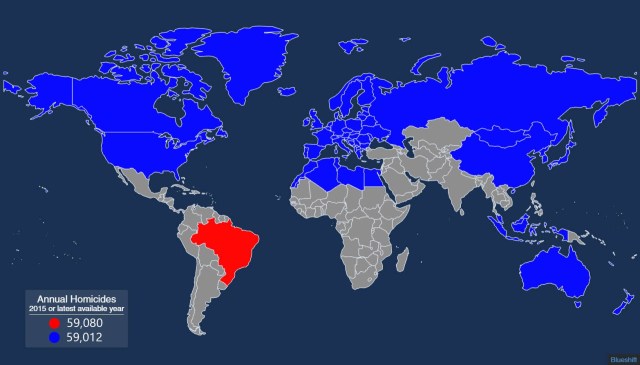 More Murders in Brazil Than All the Blue Countries Combined http://metrocosm.com/homicides-brazil-vs-world/

“Everyday, everywhere you look, the criminal is armed with a high-powered weapon as the citizen tries to hide,” [lawmaker] Rogerio Peninha Mendonca … said in an interview. “What we want is for the citizen to be more capable of defending himself.”

… Forty-two percent of Brazilians believe gun ownership is a citizen’s right, according to a November survey by pollster Datafolha. That’s up from 30 percent four years earlier. And of the lower house lawmakers who have expressed opinions publicly, slightly more than half support the proposed legislation, according to a scoreboard maintained by Peninha’s staff.

Fellow lawmaker Bolsonaro, a former Army captain, has been preaching the gospel of gun rights as part of his law-and-order pitch to voters. In polls he trails only former President Luiz Inacio Lula da Silva, who will likely be barred from running. __ Bloomberg

Gun Control Crusaders Do Not Care if You Live or Die

Criminals can always get access to weapons — legal or not. Law abiding citizens are far more constrained in their actions, often leaving them at the mercy of armed criminals in gun control jurisdictions.

The gun control movement is just another way to transfer power over citizens’ lives from the people to the government — which has a legal monopoly over the use of force in most nations. In other words, their “compassion” is a mask for their control-lust and perverse need to dominate their fellow citizens.

7 Brutal Rules for Keeping Your Balance

Following the 7 Brutal Rules below is a link to the parent article which helps to explain the reasons for each.

John Hawkins, the author of the list and linked article above, is actually being very charitable to his fellow man. In the postmodern multicultural world of rabid political correctness and vicious left-wing racism and sexism, things are far worse than commonly understood — under the surface.

Jordan Peterson’s rules require hours of explanation, as they are highly metaphorical.

Rule 1 Stand up straight with your shoulders back

Rule 4 Compare yourself with who you were yesterday, not with who someone else is today

Rule 7 Pursue what is meaningful (not what is expedient)

Rule 10 Be precise in your speech

Rule 11 Do not bother children when they are skate-boarding

But once you have wrapped your head around the 12 rules above, you will recognise common ground between the two distinct sets of rules and facts above, and may better understand why ordinary citizens need to make themselves far more independent, and far more Dangerous, than the ruling leftist overlords of the post-modern age would like.

It is never too late for a Dangerous Childhood

Note: Brazil will never be Switzerland or pre-immigration Sweden. Different populations vary in genetically & environmentally influenced personality and temperament. Violence comes more naturally for some populations than for others. That is not the question. The problem is: how to maximise safety for those citizens who are law-abiding and peace-loving when they are surrounded by significant numbers of people who are prone to violence, theft, intimidation, and extortion? The solution seems to be to give them a reliable way to defend themselves against the violent and murderous bullies.