China is no longer the manufacturer of first resort for a growing number of western importers. China is losing market share to upstarts, newcomers, and old grizzled rivals such as Japan, Taiwan, and South Korea.

China is losing market share not only to cheaper, younger countries like Vietnam. It is also ceding ground to greyer, costlier rivals like Japan, South Korea and Taiwan. __ Economist

In fact, China is losing market share to many more countries than the few mentioned above:

At the beginning of this century, about 90 percent of apparel sold at Walmarts was made in China. By the end of 2012, that balance between China and the rest of the world essentially reversed. Then, my wife, surveying our local Walmart, found that every item of the store’s house brand, George, was made in Bangladesh. Simply Basic sleepwear came from Cambodia. Items with the Hanes label were stitched together in Guatemala and El Salvador. Wrangler jeans were imported from Nicaragua, and Fruit of the Loom clothes came in from Honduras. Danskin garments? They were made in the Middle East and Africa: Jordan, Egypt, and Kenya. __ Losing the Trade

China is known as the country that cheats, steals, pirates, and lies in all aspects of trade. As the cost of Chinese labour rises, increasingly bad karma is likely to descend on the middle kingdom.

And China is Losing Workers 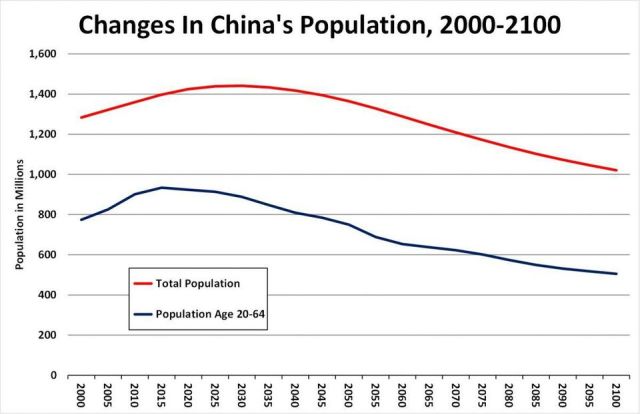 Demographic change can alter a nation’s destiny like no other factor.

China’s working age population will fall 5% by 2030, a decline that is inevitable because the workers of 2030 have all been born already. It is likely to fall by a further 20% by mid-century as China “gets old before it gets rich.” By the end of the century China’s population might fall to as low as 600 million, and will certainly be less than 1 billion. Demographic decline will soon become a serious drag on economic growth. __ https://www.forbes.com/sites/salvatorebabones/2017/12/31/china-max-how-demography-economics-and-geography-will-combine-to-limit-chinas-growing-power/#442a4fa06433

For nearly 40 years up to 2008, a boom in foreign investment and technology transfer led to a massive boom in China’s exports and cash reserves. But for the past 10 years, at least half of China’s “prosperity” has relied upon a swelling tide of debt and credit stimulus. The borrow-build-demolish-borrow-rebuild-demolish cycle can only carry China to the point that the house of cards begins to collapse.

China’s massive foreign projects and grandiose military schemes depend upon continuing domination of global exports and trade. But a “perfect storm” of contrary winds could as easily capsize the entire armada of treasure ships.

China Does Not Need a Trade War at this Time

China has relied upon hugely advantageous trade terms with overseas partners for decades now. Thanks to massive foreign investment, foreign technology transfer — and larcenous trade advantages — China has built huge trade surpluses. But that was not enough, so China also cheated, stole, pirated, and otherwise poisoned many streams of trade — not to mention all the shoddy steel and concrete.

Western countries can build factories in many different low-wage nations, and can invest in Mexico or Bangladesh as easily as in China.

On the other side of the coin, the promise of Chinese markets has always been oversold. Ask any number of western nations that have built in-country infrastructure to supply Chinese markets how it feels when they are pushed out of China by locals with political connections and easy credit. Fool’s gold.

Global Markets are In Play

Take nothing for granted — especially conventional wisdom. Everything changes, and everything you are told is a lie.

Rigid and corrupt tyrannies spend massive amounts of money on propaganda and internal security. Unrest and insurrection are only a heartbeat away, when the fate of the entire nation rests upon just one man.

Check out this review of the new documentary The China Hustle. Choose not to be a China sucker any longer.

This entry was posted in China, Demographics, Economics and tagged china bubble. Bookmark the permalink.