First Educate the Child to Thrive in the World

Then if He Wants More Schooling, He Can Pay for It

Most US Jobs Do Not Require a College Degree
https://www.bls.gov/opub/ted/2017/37-percent-of-may-2016-employment-in-occupations-typically-requiring-postsecondary-education.htm

An education into broad personal competence has nothing to do with a college education. College is “schooling,” and most modern degrees in the US are less valuable than a roll of toilet paper — in terms of added knowledge and competence. For most US college degrees, the only benefit is the credential itself — and credential inflation in college degrees assures an ever diminishing return as the years pass.

Does It Matter What College a Student Attends?

If a Dangerous Child decides to continue his schooling via college, will he benefit by going to an exclusive, elitist, expensive private college instead of going to a less expensive state college?

Where You Go to College Doesn’t Matter

The author in the piece above provides a sound argument for the case that less expensive schools provide better value — in terms of education. It is the student who educates himself, not the professors and TAs.

A bright, disciplined student who avails himself of library and internet resources in an efficient way, will learn far more at an inexpensive school than the average student in more expensive schools who too often count on professors to teach them — and rely on paper credentials to get them through life. This is particularly true in the age of credential bloat and administrative bloat — where the lion’s share of tuition increases go toward costly facilities and programs which have nothing to do with the student’s educational needs or future life prospects.

An 18 year old with three distinct career competencies, a high school degree, and business skills via actual experience — plus half the credits required to graduate from most colleges before ever setting foot on a college campus — is in a position of strength when deciding his future career direction. This is one of the gifts we give the Dangerous Child, which is incalculably more valuable than any amount of phony self-esteem or ginned up self-righteousness of social justice warrior-children clogging the grounds of many of the US’ schooling providers. 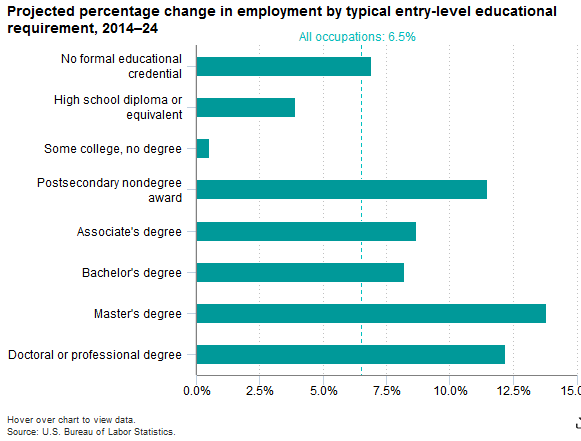 Expected Credential Bloat in US to 2024
https://www.bls.gov/opub/ted/2017/37-percent-of-may-2016-employment-in-occupations-typically-requiring-postsecondary-education.htm

In the US, due to credential bloat and degree inflation, the value of a modern 4 year college degree is barely equivalent to the former value of a high school degree a few decades ago in terms of job requirements. At this rate, a masters degree will soon be the equivalent of today’s bachelor’s degree, and so on through time. Students do not become more competent for the inflated degrees, they are merely following the signals being sent to them by society so that they can qualify for employment in the future.

During the most dynamic years of economic growth in the US, educational requirements beyond the 8th grade were virtually unknown. Most 8th grade graduates of the time were far better educated than almost all of today’s high school graduates and college students.

Since that time, K-12 schools have become required centres of incarceration, indoctrination, and bad habit inculcation, with virtually no value added to the child. As a result, today’s colleges are forced to spend great time and effort to bring the reading and numeracy skills of freshmen and sophomores up to the minimal levels needed for mediocre college performance.

Credential bloat and degree inflation simply extends the charade to “higher levels” of farce, requiring ever more years of a young person’s life, and ever more $tens or hundreds of thousands of dollars in debt.

It Is Never Too Late to Have a Dangerous Childhood

If you are getting the impression that US students are being suckered by a corrupt schooling establishment from K thru University, you are perceiving the reality correctly. The problem will never be solved until parents take their kids out of the system and provide them with alternative — and more substantive — pathways to knowledge and competency.

Your passivity in the face of this corrupt monstrosity will eventually convert into future difficulties for your children, and perhaps ultimate failure. The ongoing weakness, superficiality, and indebtedness of society at large is due to the poor preparation for life that has been given to US students for several decades now. Stop feeding the problem.

This entry was posted in Dangerous Child, Education, University and tagged university. Bookmark the permalink.