Every technology contains an innate “economy of scale” for the system within which it operates. As seen in the graph below, grid-scale wind energy is beginning to run into inherent limits of applicability in US power grids:

Diverging Curves Display Wind’s Limits
This chart from the Department of Energy (DOE) shows how little electricity is generated by wind, despite its seemingly large installed capacity.

The amount of electricity actually produced from the huge investment in wind power is not only very small, it is unreliable and may not be available to meet peak power demand during hot (still) summer days. And during winter storms, wind power may fall off because the winds are too strong. So much for the notion that wind is there for the taking. __ Source

Although installed wind energy capacity is rising in an exponential manner, the actual electrical generation by wind farms is flattening to an oscillating plateau — a marked divergence of the actual from the theoretical. This is not a mystery, and has been predicted by knowledgeable electric power analysts for decades.

Wind and Solar Are Not “Killing” Coal

Wind and solar output are unpredictable, unreliable, chaotically intermittent. To prevent ruinous power blackouts caused by an over-reliance on erratic power sources, it is necessary to build a large backup system of generators that utilise more reliable power sources — coal and gas.

Why? Basically because power generators will have to build and maintain a parallel set of fossil fuel plants to supply energy to make up for shortfalls in renewable energy when the wind falters and the sun goes down. It’s not quite the same thing as having to pay for and build two separate power generation systems, but it’s closer than most advocates for renewable energy would like to acknowledge. __ Reason

No, it is even worse than that. Governments mandate “the first use” of wind and solar energy when available, and provide massive subsidies to wind and solar projects. As a result of government interference, wholesale prices for energy are driven down below profitable levels. The utilities that operate vital standby generators are forced to watch their expensive plants suffer premature wear and tear, while having to endure artificially depressed compensation for the reliable power they provide — sad compensation for saving power grids from crashing time and again. 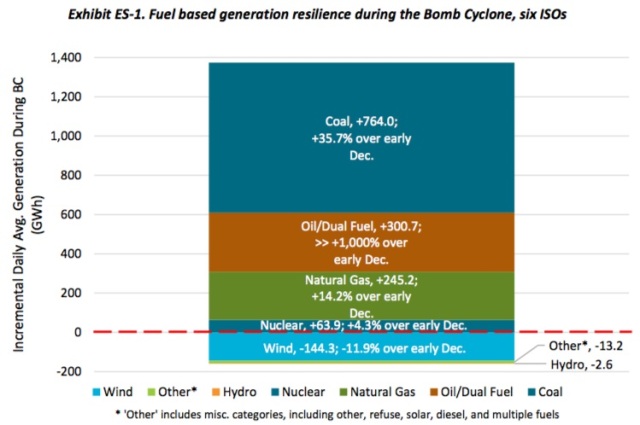 Some forms of power production are more resilient than others. In the face of unpredictable circumstances, oil-gas-coal-nuclear are relatively resilient, while wind & solar have negative resilence — high vulnerability. Given that advanced societies base their very existences on affordable, reliable, high quality, resilient sources of electric power, intelligent people should be very sceptical of grid-scale wind and solar energy.

Over the past decade, the world has spent US$ 3.0 trillion on renewable energy, according to the International Energy Agency (Figure 2). For that expenditure, the clean cadre has taken a couple of points of share away from coal, the black stuff that seems to have nine lives (Figure 3). __ Myth of Energy Transition

Grid-scale wind and solar energy were supposed to displace coal and gas power. It is almost impossible for wind/solar advocates to explain why that is not happening in any meaningful sense. The truth is that wind and solar cannot in a million years keep critical “life and death” power grids from collapsing on their own.

Even with unlimited storage, the costs of compensating for the inherent shortcomings of wind and solar would break most utilities, making a total nationalisation — with much higher total costs for power — mandatory. 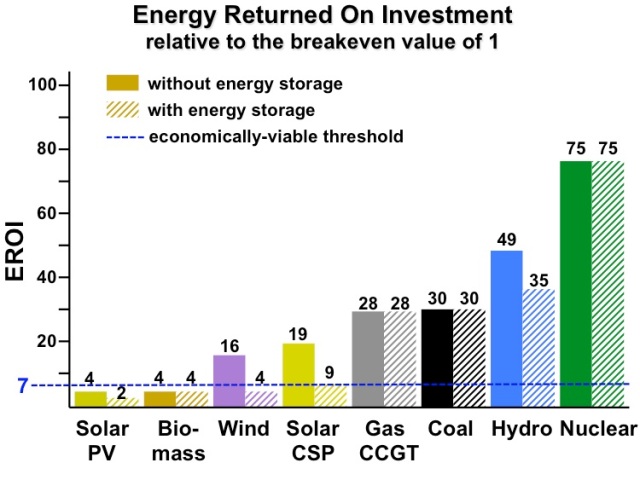 In the long run, only advanced nuclear power can provide the reliable, high quality, affordable power supplies that developed nations require for their life or death critical infrastructures.

Sure, peak oil is largely a myth, and the climate apocalypse cult is based upon a massive delusion. But humans have better things to do with hydrocarbons than to burn them, and over a time scale of tens of thousands of years and longer, only nuclear power — advanced fission and fusion — can be relied upon to sustain human needs for energy and heat.

Radical green environmentalists of the leftist dieoff persuasion have taken over the energy policies of many western nations — driving up energy costs and undercutting reliability and quality.

Relying upon unreliable energy sources for vital power supplies is the mark of ideological blindness and possession. Smarter people have been warning about the elitist infatuation for energy starvation for decades. Unfortunately, a thorough corruption of government, media, academia, and other cultural institutions prevents most citizens of advanced countries from hearing about and understanding the hazard being foisted upon them by their “betters.”

If you pay attention now, you can begin to make provisions.

Hope for the best, prepare for the worst. It is never too late to have a Dangerous Childhood ©.